Now that I’m more or less an adult, albeit a stunted and naive one, Halloween is rapidly becoming my favorite holiday. There’s no pressure to buy gifts, and I get to drink… a lot. It’s like Thanksgiving, except that I get to hang out with sexy nurses instead of my racist old relatives. In a word, I like Halloween for the same reason I like roller coasters, Renaissance fairs, and the Mighty Mighty Bosstones: it’s just plain fun.

Fantasy football should be that same kind of pure fun. When I started out, it was. This year, however, I’ve gotten wrapped up in the competition, in the money, and in the self-imposed pressure that comes with trying to be a fantasy “expert” (whatever that means). It caused me undue stress. I stopped having fun.
So, this week, I took a step back, and I remembered to enjoy myself. As a result, I took some weird leaps of faith in the name of fun. My pickups and trades this week were risky– maybe they’ll pay off, maybe they won’t. Either way, I feel good about them. I honestly feel as though remembering to have fun helped make advantageous choices I wouldn’t have made if the Halloween spirit hadn’t reminded me to have a good time.
What I’m saying is, at the end of the day, having fun might just give you a competitive edge. If you over-analyze everything, you’ll find yourself unable to move from the severity of it all. So, breathe. Smile. Feel the Halloween vibes. Have fun.
Let’s get to it.
How ‘Bout These Guys

Stefon Diggs (WR, Minnesota Vikings): Why are you people not catching on to Stefon Diggs? I mean, you guys are starting to, but he’s still available in one-third of ESPN standard leagues! Get on board, people! The man has 314 yards in three games, is elevating the play of Teddy Bridgewater, AND has a pun-friendly last name. I can Digg it. I also love his matchup this week against the Bad News Bears, who have allowed the third-most fantasy points to wide receivers, including 44 total fantasy points to Detroit receivers in their last game. Pick him up off of waivers, or consider trading; I see Diggs trending upward, starting now. 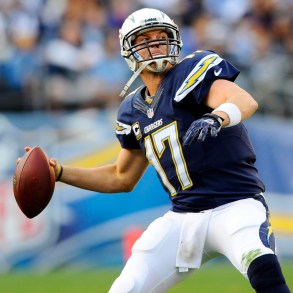 The San Diego Chargers Passing Game: In case anyone reading this was thinking, “You know, I think this is the week I sit Philip Rivers. Heck, I’ll sit Keenan Allen too,” please, for my sake, don’t do it. First in fantasy points allowed to QBs, and second in f.p.a to WRs, the Ravens are almost impossibly bad at stopping passes this year. They’re better against opposing RBs, though I don’t see them stopping Danny Woodhead, since he gets most of his yards from scrimmage through the air (and, as a nice bonus, he’s Rivers’ favorite red-zone target). I also like Malcom Floyd this week, since he’s the Bolts’ deep threat, and the Ravens have allowed more completions of 20-plus yards than any other team this year. Stevie Johnson has a lower ceiling, but for those who don’t have better options (including me in one league), he’ll do just fine. It feels a little odd to be this enamored of an entire offensive unit, but the Chargers are that good right now– and the Ravens are just that bad.
Jonathan Stewart (RB, Carolina Panthers): In this ever-changing, topsy-turvy world in which we live, it’s good to know that some things don’t change– namely that, for almost five years now, the Colts defensive line hasn’t been able to stop power rushers. This week’s prime beneficiary is my man Jon Stewart, who has found new success as an NFL halfback since leaving the Daily Show (they’re the same guy, right?). After a slow start to the season, Stewart has had 203 yards and two touchdowns on 44 carries in his past two games. What’s more impressive is that those games were against Seattle and Philadelphia, who both have front sevens that make the Colts’ group look like powderpuff. Stewart is poised for his third big outing in a row.
Not Bout These Guys
Dez Bryant (WR, Dallas Cowboys): Play it cool, Dez owners. Don’t be the fantasy equivalent of a guy who neglects to wait three days to call a girl. Wait this one out, and see what happens. The first week back from an injury is never easy, and a matchup against the Seahawks (fewest fantasy points allowed to WRs) isn’t the best way for Bryant to ease back in. Add to those two negatives the fact that  Matt “Not Good” Cassel is under center, and you’ve got yourself an unholy trinity of reasons not to start Dez Bryant. The future is bright for Dez, but there is no reason to start him this week.
Jeremy Hill and Giovani Bernard (RBs, Cincinnati Bengals): Andy Dalton is going to come out throwing in this one. Tyler Eifert, A.J Green, and Marvin Jones are all going to put up big numbers against the second-worst secondary in the AFC North (another tip of the hat to you, Ravens), but the Steelers can’t be beaten on the ground. They have allowed the third-fewest fantasy points to opposing rushers, and they’ve only allowed one rushing TD all season, which doesn’t bode well for the touchdown-dependent Hill and Bernard. I hate this dumb platoon almost every week, but this game is bound to be particularly bad.
Russell Wilson (QB, Seattle Seahawks): It’s been a while since I’ve felt good about Russ. With only two games of more than 15 fantasy points, Wilson’s ceiling is pretty low right now. On top of that, the Cowboys have allowed the third-fewest fantasy points to opposing QBs (and that was without Greg “As Guilty As O.J.” Hardy). If you have another option at QB, go with it this week.
That’s all for now. Happy Halloween! As always, How ‘Bout That Fantasy!