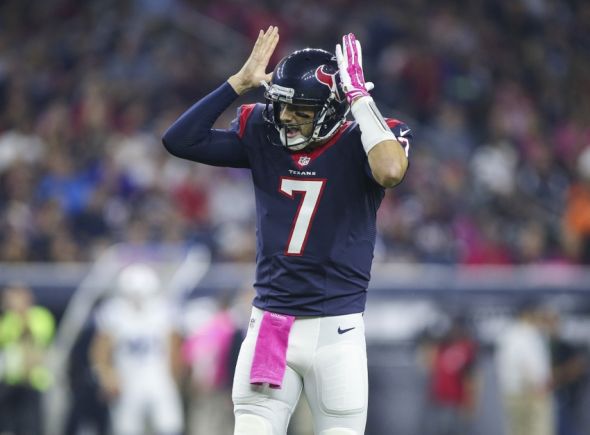 The game was a mostly uninteresting affair. A clearly superior but still underperforming Colts team survived another game without star Quarterback Andrew Luck, and the Texans continued their early-season woes on their way to a 1-4 start. The Texans have not beaten the Colts since December 16, 2012, so it must be particularly dispiriting to be facing Indy in this situation – at home, without Andrew Luck, in a time of poor offensive form for Indianapolis – and still walk away with a loss.

This game will prove of little consequence. The Colts, though deeply flawed, are still clearly the class of the NFL’s worst division, and the Texans are going nowhere in a hurry. However, Bill O’Brien’s handling of his quarterbacks warrants further examination as a case study in how teams cope with a bad situation at the sport’s most important position.

“… And the disrespect that they show [Brian Hoyer and Ryan Mallett]? I’m tired of that, too. Because both those kids can play. They just need a chance and one of them is going to get it.”
With cameras rolling, Houston Texans Head Coach Bill O’Brien delivered that line as part of a longer, swooping preseason tirade about the general lack of respect and attention afforded the Houston Texans by our national sports media and the national NFL fan base’s consciousness. Five games into the season, it’s a remark that O’Brien would almost certainly like to take back.

Those comments, along with every minute of the Houston Texans’ preseason competition for the starting quarterback spot, were captured and televised on this season of HBO’s Hard Knocks. O’Brien eventually landed on Brian Hoyer as the team’s starter, citing Hoyer’s superior experience, game management skills, and what Hoyer showed on the previous season’s film in two-minute drills.

Brian Hoyer’s “chance” ended up lasting three quarters into their first game as he was an unequivocal disaster from the first snap. He completed 18 of 34 passes for 236 yards before being benched for Mallett in the second half. Mallett impressed, packing on some garbage time window dressing to make a blowout loss look less embarrassing on the score sheet.

After one game, O’Brien decided that it was time to give Ryan Mallett his chance. Hoyer was relegated to backup duty and Ryan Mallett was given the starting role for Week 2’s matchup with Carolina. Mallett has also been awful, completing 70 of 134 passes for 672 yards, two touchdowns and four interceptions since then. Houston’s Week 4 game against Atlanta featured one of the worst quarterbacking efforts of the season from Mallett, who finished the game with a QBR of 5.5 out of a possible 100. All the same, O’Brien elected to stay with Mallett for last night’s game with the Colts.

“Brian I thought did a good job tonight, but we’ll talk about it. I haven’t even talked to the staff yet about it. We’ll sit down and review the film. I thought Brian did a good job though. He went in there, it wasn’t the easiest of circumstances – other than the last play there where he kind of launched it up there. He probably wants to have that one back, but I thought he did a good job. We’ll review it tomorrow and see where we are at that position.”

Regarding Quarterback controversies, John Madden used to say, “If you think you have two, you don’t really have one.” I certainly do not envy Bill O’Brien after this season’s first five games. He is an intense man who, like every other NFL Coach, badly wants to win. And when you badly want to win, your quarterback situation being completely untenable is a deeply unwelcome realization. However, for his own good and that of his team, he needs to accept the regrettable truth.

Bill O’Brien needs to select the better of two bad options and name Brian Hoyer the Texans’ starting Quarterback for the remainder of the 2015 season. It is a near-certainty that he will not flourish into a viable starter, but the probability increases for Hoyer (and Mallett, for that matter) in the absence of constantly changing roles.

It turns out that both of those kids can’t play, but O’Brien can still be right about one thing. There is a starting chance available here, and it’s time for Brian Hoyer to get it.