Home / Andy Cuello / NFL / The Sad Future of the NFL

Football is the most popular sport in America. The Super Bowl this weekend will be the most watched television event in history. Millions and millions of eyes will be locked to the television, butts firmly stapled to their chairs, as million dollar commercials and million dollar halftime shows break up the action before a winner is showered in confetti and etched into history. And yet the future seems clear… by the year 2046, there will be no National Football League. 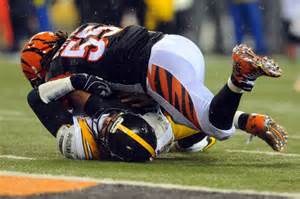 How many times have you seen the following situation play out: Its 3rd and 13, and a bad quarterback throws a bad pass to a bad receiver, who gets subsequently laid out by 220 pounds of world class athlete, running at 19.3 miles per hour, only to draw a yellow handkerchief, essentially rewarding him for not having the fast twitch muscle, hand-eye coordination and body control required to hang onto the ball.

Even though the aforementioned penalty is a bastardization of the game of football, something needed to be done about concussions/brain injuries. As more and more former players from the 1970’s began forgetting their granddaughter’s names too often, and therefore suing the NFL for Billions, something had to change. If there is one thing that will get the league to change its ways, it’s most certainly the loss of money.

Why are brain injuries becoming such an issue? Because the NFL is currently caught up in a perfect storm of dangerous gameplay that involves two contributing factors: 1) Athletes of increasingly-freakish physical prowess, and 2) A brand of NFL football that is getting more high-flying and spread out by the minute. With the advent and widespread use of the shotgun formation, and the spread offense with 3 and 4 receiver sets, the players are more spread out on the field than they ever have been before. Being more spread out…means faster play…faster play means longer running starts to the ball carriers…longer running starts means harder hits…and harder hits means more concussions. If this were 1996, and 80% of the game was played between the hashes, and running the ball out of I-Formation was still en vogue, then there would be less impactful collisions. Unfortunately, with all of the pass-happy game plans we are seeing today in the league, high speed collisions where both parties have 15 yard head starts are inevitable, and happen more frequently than in the past, by orders of magnitude. 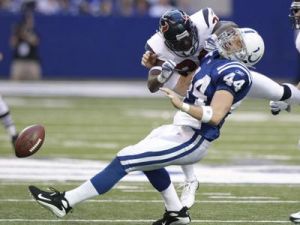 As if the transition to more pass-happy, and therefore more dangerous, style of play wasn’t enough, the second component of the perfect storm involves NFL athletes becoming bigger, stronger and faster year after year. Remember “The Freak”? Of course you do. Jevon Kearse was given that nickname when he came out of the University of Florida in 1999 because (at that point in time) nobody had ever seen someone that big and strong run that fast. At 6’5, 255 pounds, he ran a “blistering” 4.62 40 yard dash at the NFL combine, and from that moment on, scouts couldn’t stop drooling, nobody had ever seen anything like him before. Now snap back to the present; how many players from the past 3 combines ALONE weighed more than 255 pounds and ran faster than 4.62? Quentin Couples, Ezekiel Ansah, Chandler Jones, Lavonte David, Dion Jordan, Barkaveous Mingo, Jadavion Clowney, and Dee Ford. Freakish pass rushers who weigh 260 pounds, run 4.5s and bench press Honda Accords are very much like cellular phones: back in the 90’s having one was considered a divine luxury…nowadays if you DON’T have one, you’re clueless. So not only has the game itself become played in a more dangerous style, but the players playing the game are more equipped than ever to inflict irreparable bodily harm. The perfect storm.

I cannot say with certainty that the NFL will cease to exist in 30 years, but what I do know is that the game is nearing a dangerous crossroads of sorts, as the powers that be try to wrestle with the judicial system, the Player’s Association, and physics, in an effort to make a safer game. Here is how I see it playing out:

Scary, huh? Hate this analysis all you want but there isn’t a knowledgeable football fan out there that doesn’t see the trend forming. Football is more than a game. For the inhabitants of this country it’s a way of life. Football changes the discretionary spending habits, and dietary decisions of most red-blooded males (and females) from 1-11 PM on each Sunday, and it is revered on par with most religions. But when will the demand for safety change the game for good; warped into something we only vaguely remember as football? The human race outgrew fighting in the Colosseum, they outgrew training and battling slaves, and they moved on from jousting and hand to hand sword combat for sport. American Football might be next. So enjoy Super Bowl 50 this weekend. Be sure to get your fill of food and drink and enjoy the game with friends and family, because it will not be around in another 50 years.