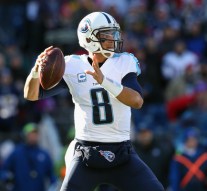 Other than that awkward Brady-less 2008 season when the Titans somehow went 13-3 with Kerry Collins, there hasn’t been much to cheer about in the Music City. As much shit as people give Jeff Fisher for being 8-8 every year, Tennessee has been way worse since he was fired in 2010. So where are we in 2016? Vince Young didn’t work out. Neither did the Hurt Locker (sick movie reference that incorporates the player’s fragile nature, right?). Most perennially lost organizations lack a QB to hang their hats on, Tennessee is no different.

So let me ask you this: You watch a lot of football, including college Saturdays, right? You probably fancy yourself as someone who knows QB talent…what’s your honest opinion of Marcus Mariota at this point? Is it possible to even have one? I have heard fans say everything from: “he’ll become defrauded as a Read Option guy like Kaepernick” to “He’ll be Drew Brees with mobility”. Something has gotta give. As we take a moment of silence to remember Steve McNair and what he did for this squad during better times, let’s dig in to see if Mariota can be the guy in Tennessee…

It starts and ends with the Throwin’ Samoan.

When I looked at Mariota’s 2015 tape, I saw so many things that were encouraging. He showed signs of being a real NFL QB capable of real NFL throws, and not some spread-option, college-y gimmick.

One thing that I want to see him improve on is his footwork when he takes snaps from under center. Reaching down and grabbing the ball from the center’s ass crack is something very new to him. If you’re an NFL QB born after 1992 or so, you’re simply not old enough to have been raised in a quarterbacking world that involves snaps from under center. These kids coming into the league today have been put in shotgun since Pop Warner, in an effort to maximize their skills as a runner. Mariota is a perfect test case for this generation of QB’s moving forward. How important is taking snaps from under center, after all? Will operating from under center go by way of the fullback, and be completely extinct by 2020 in all situations that aren’t short yardage? Time will tell, for both Mariota and the rest of the NFL.

If you’re a Titans fan, you have to be pretty jazzed about the RB situation, relative to what it was in 2015 with Antonio Andrews diving into the line of scrimmage. In a league where teams are refusing to spend money and draft picks on tailbacks, Tennessee has made like Clint Eastwood from Gran Torino and snarled “get off my lawn!” by taking Bishop Sankey (2nd, 2014) and Derrick Henry (2nd, 2016) in recent drafts. They’ve also traded for the onerous DeMarco Murray contract. 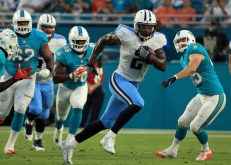 This is probably not the savviest way to build your team, as evidenced by the fact that Sankey’s been cut already, but at least in the short term it should work. At the risk of having to lift and tuck my boner back into my waistband over the preseason…Derrick Henry looks like THAT DUDE so far. Gonna be fun watching him be everything that Trent Richardson should have been coming out of Bama. Murray will probably get the bulk of the workload in the beginning of the season, and I think people are forgetting how good he can look due to Chip Kelly’s misuse of him running slow developing sweeps last year. The best case you can make for the Titans offense, is a world where Marcus only has to throw the ball 25 times a game due to the two headed running game pounding teams into the ground

On the outside, things are far more uncertain. They just released 2013 1st round bust Justin Hunter, and traded away the freakish yet misbehaved Dorrial Green-Beckham as well. Between Hunter, Beckham and the aforementioned Sankey, that is now three top 40 picks of the past 3 years spent on offensive players that are now no longer with the firm. Yikes, that’s why you’re the Titans.

In a weird way, the solid if unspectacular possession guy Kendall Wright (who was a 1st rounder too) has been their most reliable target of the past half-decade. Add that to the talented but stone-handed Delanie Walker, and you get the beginnings of what could be a middle of the road pass catching duo. The key for me here is incoming Free Agent from Miami Rishard Matthews. As a Phins fan, I know everything there is to know about Matthews so here’s the skinny: Great number 2 WR, could easily catch 100 balls if nobody else is open, but not going to keep Defensive Coordinators up at night.

Meanwhile, the Titans have poured some serious resources and multiple first rounders into their O-Line in recent years with mixed results. Chance Warmack has been dreadful, yet Taylor Lewan has been great.

On a side note: I always feel that I can tell which O-Linemen are gonna be good or bad based on the interview they give ESPN right after they step off the draft podium and have taken awkward pics with Roger. I like my linemen like I like my nightclub bouncers: absolute meatsticks. I remember when Lewan was drafted, dude sounded like he had never been in a library once, and said “I cant wait to get after it”. Warmack on the other hand quoted JFK…c’mon dude. Anyways, Tennessee also drafted another Tackle 6th overall this year in Jack Conklin out of Michigan State. I didn’t catch what he sounded like at the draft so I’ll reserve judgement. 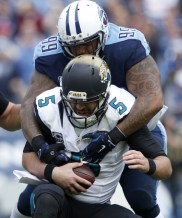 The Titans were 30th in DVOA last year, but I have reason to think they’ll be a lot better. They had a whopping THREE 2nd round picks this past April to improve this unit. After they used one of them on Henry, they took Clemson pass rushing LB Kevin Dodd, and Penn State run stuffer Austin Johnson with the other two. Both of those guys are plug and play kids, and when you add them to the front 7 that includes pro bowler Jurrell Casey, Wesley Woodyard and the talented yet injured Brian Orakpo, you can make a case this 3-4 base D will be able to bring the heat.

What excites me the most about this defense is its versatility. A lot has been made about the modern day NFL defense needing to have players that can both rush the passer, as well as cover in space. I’m talking the rare players who are just as comfortable with their hand in the ground getting after it vs also covering a shifty Edleman type in the slot. It’s hard to find guys with that type of versatility and athleticism, but I think that’s what this Titans team has.

For as much talent as the front seven should have, the defensive backfield scares me a ton. Brice McCain should never be a team’s number two corner, but Jason McCourty is a solid partner. If the youngins up front can disguise their exotic blitz looks, I can see a flustered Bortles or a frazzled Osweiler tossing up cookies.

Funny how…the more I dug into this team, whether it was on film or on paper, the more I talked myself into them being .500. Mariota will always be compared to Winston, and for good reason, but I think it’s “so far so good”. I would not be surprised if he takes a big leap this year.

The defense worries me due to its youth, but they at least built it correctly through the draft. Overall, I have them going 6-10, but with some serious upside from here, especially if the Texans and Jaguars aren’t as good on offense as we think.