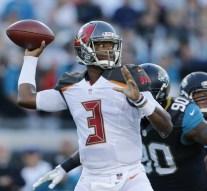 As a ‘wise’ man once said… FUCK HER RIGHT IN THE PUSSY!

Leaving Jameis Winston’s college fuck-ups aside, the second-year quarterback showed enough in his rookie season to give Buccaneers fans hope for his second year. While some inexperienced Quarterbacks exercise extreme caution, horrified of potential mistakes, Winston excelled in his fearlessness. He threw the interceptions that every aggressive young quarterback does, but also demonstrated an ability to make all of the throws that an NFL QB must. The question is not if Winston will arrive, it is merely when.

Fortunately for the Buccaneers, they have one of the league’s better backfields buying Winston time. The Artist Formerly Known As Muscle Hamster (“Doug Martin” for shorthand) is one of the best running backs in the league.  He’s backed up by the savvy and brutish Charles Sims.

Tampa’s wide receivers present an interesting dilemma for opponents. Mike Evans and Vincent Jackson present an arguably unequaled 1-2 punch for opposing secondaries. Beyond that formidable duo, Tampa’s pass-catching depth leaves a lot to be desired. Tight End Austin Sefarian-Jenkins is not an awful pass target, but that’s the best that can be said for him and it’s a good deal more than can be said for the rest of the rest of these players.

Jameis Winston has a great backfield and two great receivers to go up and get his passes. That’s a good thing too, given how bad his offensive line figures to be. The Bucs have, for YEARS, been an offense undone by horrible blocking. New arrival JR Sweezey (awful in pass protection) is not the answer.  The fact that Sweezey may well be their best offensive lineman does not bode well. Winston would be wise to expect a pummeling this year.

Let us all just take one minute to reflect on how wonderful a professional football player Gerald McCoy is … I hope you all enjoyed that, because there’s not much else to be said in favor of this defense. It’s hard to fault an elite talent like McCoy for not anchoring a totally abject supporting cast, but that’s his duty this season if the Bucs are to find any success.

Former Head Coach Lovie Smith never got to see his rebuilding project through and the result is one of the NFL’s worst front sevens, even though it features Gerald fucking McCoy. It’s not just that the Buccaneers lack the depth every team needs to pressure opposing passers over the course of the season. Tampa doesn’t have the pass rushers to make their defense effective when everyone is healthy. This lineup will reek of a new coach managing another coach’s players.

Things don’t get much better when you get to the secondary. Vernon Hargreaves was a wise selection in the first round, but the defensive backfield positions always feature a large learning curve and Hargreaves will be susceptible to rookie mistakes. Tampa also signed veteran mercenary Brent Grimes to help. They’ll hope he can provide stability before they’re forced into starting young players completely out of their depth.

Jameis Winston has a season-long coming out party. He and Doug Martin overcome the inefficiencies of the offensive line in front of them and the Bucs are one of the NFL’s more exciting offenses to watch. Gerald McCoy holds up the defense as only he and few others can and the Buccaneers announce their presence on the national stage.

Uhhh …  Jameis Winston and Doug Martin are never able to settle in behind one of the League’s worst offensive lines. Evans, Jackson, and McCoy spend their year in frustration and disinterest as the Buccaneers return to the bottom of the heap.

Jameis Winson is going to be really good at football. That goes a long way. It can even wallpaper over offensive line problems to a point. It can definitely give your defense fewer chances to shit the bed by keeping them off the field as long as possible. Stat nerds have been high on the Bucs for years, but there’s just not enough talent here to think they’re going to get to .500 without a LOT of things breaking their way. They’re still at least one year away, but they’ll surprise plenty of people this season.