At a glance: To put it simply, this has the potential to be the type of game we look back on in 20 years as a classic, where two iconic, generation-defining quarterbacks put their teams on their shoulders. Don’t look now, but Cam and Russell have kind of an early 2000’s Brady-Manning thing going on, as they have already met 5 times in their short careers including last year’s divisional game. Like Brady-Manning back in the day, it seems one guy always comes out on top, with Wilson winning 4 of the 5 matchups. As I wrote in the Minnesota preview, Seattle has transformed itself pretty much on the fly from a ground-and-pound rushing attack to a dynamic downfield passing offense. For those of you who think that a quarterback’s natural progression normally looks this way, as he gets more of the offense put on his shoulders, let’s not forget the myriad of examples in recent years where that was NOT the case once the offensive talent deteriorated around him (Sanchez, Kaepernick, etc). The Panthers are in many ways, what Seattle was a couple of years ago, except flashier. The similarities are striking; the Cats have the shutdown corner (Norman), the amoebic defensive line that gives tons of looks (Ealy, Short, Lotulelei) and even the underwhelming receivers to boot. When I re-watched this game from Week 6, a Carolina win despite being down 20-7 at one point, I saw a couple things that I think will repeat themselves: CAR receivers not being able to get separation, Seattle not being able to run a lick, and both defenses giving up NOTHING cheap. Let’s get to it… 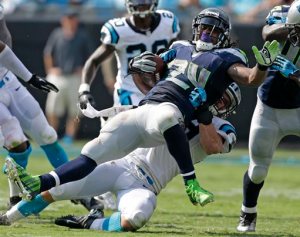 When Seattle runs the ball: When these two teams met in October, Beast Mode squeezed out a painful 54 yards on 17 carries, with seemingly every single one of them starting with a Panthers lineman hitting him in the backfield. If it were any other running back, the line would have read 17 carries for 30-35 yards. Lynch was dropped for a loss on 8(!) of those totes, and much of that was due to the penetration dual 2nd rounders Kony Ealy and Kawaan Short would get off the snap. Wilson kept the ball on zone reads only twice and for modest gains, most likely a testament to how little OC Darrell Bevel wanted him to take hits from Kuechly, Davis & Co. If Seattle wants to go over 100 yards on the ground here, they are going to need Wilson to keep the ball more, just to give that absolutely loaded front 7 one more thing to think about. There enlies the fundamental difference between the Hawk’s offense in 2015, compared to what it has been in recent years: this rushing attack is no longer good enough to run the ball out of obvious heavy-set I-formations whenever they want, they must involve misdirection with the QB. Thing is, it’s no coincidence that we have seen fewer Wilson designed runs this season: when you’re paying your quarterback $20 MM/year, instead of $545,000, you’re going to be more hesitant as a playcaller to throw him to the linebacking wolves more than a couple times/game. 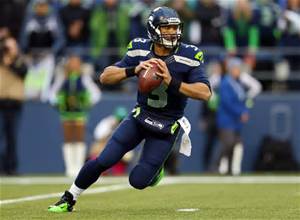 When Seattle throws the ball: Despite being harassed all day, in Week 6 Wilson was his efficient, Russell-esque self throughout his 34 dropbacks (30 passes, 4 sacks). Something tells me it will take more than 30 pass attempts to beat this Carolina D, who will undoubtedly work to take Lynch away first and foremost. It bears mentioning that Gronk’s softer NFC counterpart Jimmy Graham had arguably his best game as a Seahawk that day, snaring 8 of 12 targets for 140 yards. Unfortunately, Graham is now on IR, and without him the Seahawks no longer have a pass catcher that can get open regularly without picks/rub routes. One of the biggest questions I have about this game is: what do the Cats do with Norman? He typically lines up on the right, but I think they will have him follow Baldwin around the formation. Similar to what the Pats do with Edelman, the Hawks will make Norman pick his way through traffic over the middle on drag routes, whenever Baldwin motions into the slot. Fact is, despite my calling him underwhelming earlier in this article, Doug Baldwin is a slightly above average NFL receiver, and he is their best option. One more X-factor: the swift feet of rookie Tyler Locket. Other than Norman, the Panthers don’t have anyone that can run with him down the sideline, and on broken plays Wilson likes to go bombs away in his direction. Locket is a big play kid, and will only catch 4 passes this game, now whether those 4 catches go for ~41 yards or ~91 yards will play a big role in who wins. 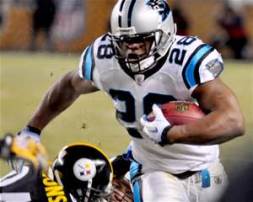 When Carolina runs the ball: In the first meeting the Panthers ran the ball well enough, but not all that great. I would not be the least bit shocked if Newton is their leading rusher in this game. Similar to the Seahawks, the Panthers do not run particularly well from under center in a traditional sense; they need the shotgun, simply because they need the perpetual threat of Newton keeping it. I do not think Stewart does much here, not only because Seattle was 3rd against the run, but also because he’s coming off an injury (as if we’ve never heard THAT before) and he tailed off down the stretch. At times, in order to spice up the running game a bit, Carolina will come out in a wishbone backfield, circa Madden 2003, with the third guy being either Ginn or Brown in motion, faking the end-around. They only give this look 4-6 times/game, but last meeting it worked pretty well, as they got 21 yards out of the three carries they did it. Bottom line is: this game will be determined by the quarterbacks, the pass rushers and the defense; anything Carolina can get from their non-Newton runners would be a huge plus.

When Carolina throws the ball: This is by FAR the most high-variance matchup in this contest. If you told me that Cam would stay in shotgun all day and fire tightly-spiraled lasers to the tune of 385 yards, 30+ points, and multiple end-zone “Dab” sequences, I would believe you. Alternatively, if you told me Seattle would stay in his face all day, sack him 6 times, and pick him off another 3 while holding Carolina to under 17 points…I would believe that as well. When I watched the film from Week 6, one thing that stuck out to me was how little separation the Cats WRs would get on every play. The completions Newton did have were thrown so hard, so well, and into such tight spaces, that the receivers had no choice but to body-catch them. If Carolina is going to generate 400+ yards of offense and win, Greg Olsen NEEDS TO eat. Starting with Gronk in the Super Bowl last year, the Seahawks have seen Cam Chancellor exhibit an alarming trend of not being able to stay with TEs down the seam. People mostly point to the corner opposite Sherman whenever they are asked about Seattle’s biggest weakness defending the pass, but make no mistake, it’s Chancellor. 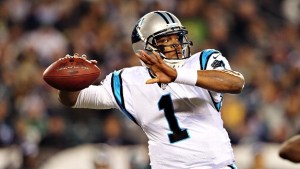 As far as Cam Newton, when you watch him on tape, and this dates back to Auburn, you’ll see he rarely gets his feet totally set, even with a completely clean pocket. This is both a blessing and a curse, as it speeds up his release time but his accuracy often suffers. Very much like Frat Stafford, Cam just has such a powerful arm that the fundamental flaws in how he sets his feet are mostly forgiven and swept under the rug. I do not see Ginn getting deep for a big one here, Seattle will sag way off him and make him earn it underneath. Pete Carroll is smart, and he knows that in order to beat Cam, you want to limit the explosive plays. As great as Cam Newton is, he’s not the type of methodical QB who will be happy taking what the D gives him and pile up a bunch of 6-9 yard completions (yet). He’s looking for the long ball each time he drops back. Knowing this, I think Seattle will keep everything in front of them, hoping that Cam will eventually get bored/sloppy with his mechanics and toss up an ill-advised one.

Specials/Coaching/Intangibles: Seattle just has something magical about them in big games don’t they? Not only that, but they have been here before, and will be up for the moment. Carolina, though, has also been here before: people forget they were 12-4 just two years ago, and believe it or not, this will now be Cam’s 4th playoff start. Oh how fast they grow up. Seattle has the kicker that I trust A LOT more in a big spot, and for whatever it’s worth…Gano missed what could have been a HUUUUGE extra point in the 4th quarter in their Week 6 meeting. Both Carroll and “Riverboat Ron” will certainly go for it on their fair share of 4th and 2’s, something that has become old hat for them, and a ballsy call like that could mean the difference. Both Ginn and Locket are fantastic returners, but as is often the case in playoff games, I expect both punters to do their fair share of conservative sideline-angling to neutralize them.

HBT’s Prediction: I think Carolina is a better team, and has been all year. They are also home. I think both quarterbacks will play well, both defenses will play well, and this will come down to the final two minutes. BUCKLE UP.