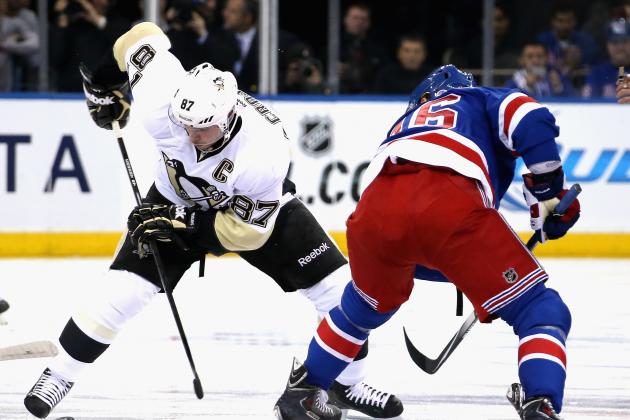 Some of the names and faces (and in the Pens case, the coaches) have changed, but the animosity will only grow when the Rangers and Penguins meet up in the first round of the playoffs for the third year in a row. The prior two series’ went the Blueshirts way, but this time around, Pittsburgh is the prohibitive favorite, after closing the season on a blistering 14-2 run. 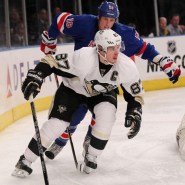 The loss of Evgeni Malkin looms large in this series. With him, the Pens are about as dynamic offensively as any team in the league. Without him, Pittsburgh is still potent, but not overwhelmingly so. Malkin, who is officially day-to-day, may or may not see the ice this series, but if he does, you can bet he won’t be 100%. Even so, while the Rangers have superior depth up front, the Penguins—even without Malkin—have the top-end talent the Blueshirts always seem to be searching for, and perhaps more importantly, are three lines deep for the first time in years. Rick Nash and Eric Staal have been stars in name only this season, and that’s a problem if the Rangers plan on keeping up with the fire power Pittsburgh will send out. 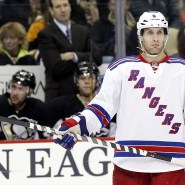 In matchups past between these two teams, this has been an easy check mark for the Rangers, but the injury to Ryan McDonagh, who may miss the entire series, is a major speed bump. In truth, neither team enters this series with a defense corp that instills much confidence. The Blueshirts have, to put it kindly, been a train wreck in their own end for much of the season, and the announcement that Marc Staal and Dan Girardi will be united on a “shutdown” pair and likely matched against Sidney Crosby was greeted with a collective gasp by Ranger fans near and far.

Pittsburgh, meanwhile, features the superb Kris Letang, supported by various youngster, scrap-heapers, and never-wases. They’re solid at best, although the pending return of Olli Maatta—who practiced Tuesday—is potentially a huge boost, and would give the Pens one legitimate shutdown pair, which, to be fair, is one more than the Rangers currently have. Defense is not a strength for either team right now so until Maatta or McDonough return to the ice, we’ll call it a push. 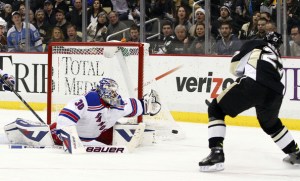 The one area the Rangers have a clear edge in. Yes, Henrik Lundqvist posted a career-worst 2.48 GAA, but that’s more of an indictment on the team around him than on The King himself, as Lundqvist’s .920 SV% was more or less in line with his career average.

Pittsburgh, meanwhile, appears to have narrowly avoided disaster in the crease, as starter Marc-Andre Fleury, recovering from a concussion, is on track to play sooner rather than later. Fleury has had his share of hiccups in the playoffs, but love him or hate him, he’s a far better option than Pittsburgh’s plan B, which is currently third-stringer Jeff Zatkoff, due to the injury to young backup Matt Murray. If Fleury is deemed unfit to start Wednesday’s Game One, it becomes a must-have for the Blueshirts.

The Rangers power play showed a pulse in March, when the Blueshirts went 11-38 with the man advantage, but quickly came crashing back down to earth (1-16 since). It all adds up to a middle-of-the-road PP. Pittsburgh, for all their offensive flair, is actually slightly worse with the man advantage, but has improved vastly under Mike Sullivan. The big difference here is what was once a strength for the Rangers—the penalty kill, where the Blueshirts, historically a top-5 team, ranked 26th. The Penguins, meanwhile, surged all the way to 5th. 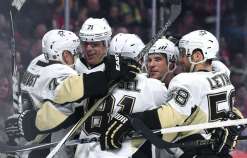 Pittsburgh: Dominate the puck. The Penguins love playing fast, and to do that, you need the puck…and Pittsburgh generally has it, as evidenced by their 52.7 Corsi For Percentage, second in the league. If the Penguins control the puck as they’ve shown they’re capable of—particularly under Mike Sullivan, under whom they’ve complied an impressive 33-16-5 record—there’s every reason to believe the Rangers, who haven’t defended well for much of the season, will make mistakes and surrender quality scoring chances. Case in point: The Blueshirts had the third-worst high danger scoring chance differential in the league. If Pittsburgh can get the puck to their top players in space, they’ll come out on top—and be a tough out for anyone moving forward.

Rangers: Plan A would be to come with a heavy forecheck and pressure the Penguins somewhat questionable defenseman. Unfortunately for the Rangers, they haven’t shown anything close to a heavy forecheck all year, and at this point, it’s unrealistic to expect one to suddenly materialize out of thin air. 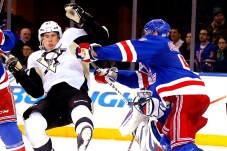 So let’s move on to plan B: Frustrate the hell out of Sidney Crosby. Legally and illegally, for that matter. The Pens’ captain, in his now 10 years in the NHL, has been known for having a bit of a short fuse, and has on more than one occasion been criticized for allowing opponents to get under his skin too easily, especially come playoff time. See here. Or here. Or peruse YouTube for a bit, there’s a million of ‘em.

Some players play well angry, Sidney Crosby does not. If the Rangers can rile up Crosby and make the Pens captain more concerned with nonsense than hockey—daring Pitts secondary scorers to step up to the plate and beat Lundqvist in the process—they have a shot. Central to that plan is a resurgent Dan Girardi and Marc Staal—both of whom put together unacceptably poor regular seasons. The Blueshirts should be able to light the lamp against Pittsburgh, and defense will be key.

The eye-test, logic, fancy stats, all of it points to the Penguins—and handily, at that. Still, there’s an old saying that every great fighter has one last great fight left in him. The Rangers, as battle tested as they come, will fight tooth and nail, but ultimately come up short, leading to a summer of uncertainty in The Big Apple while the Pens move on. Pens in 7.