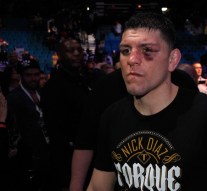 To MMA fans, the name Diaz is synonymous with brawling.

Recently Nate Diaz launched his stock into the stratosphere by trash-talking, taunting, slapping and tapping Irish superstar Connor McGregor at UFC 196. However, the younger Diaz brother’s trademark style is something of a joint-ownership and a learned habit. Nate is well-versed in the art of the trash-talk and ass-whipping by a master unlike any before him, his older brother…Nick Diaz.

A professional fighter since the age of 18, Nick Diaz has long been considered one of the top 5 welterweights of all time. His reign of terror in the Strikeforce promotion, his legendary war with Takanori Gomi in Pride, and ferocious drubbing of BJ Penn demonstrated his skill as a fighter and athlete. His intense feuds with George St. Pierre and Carlos Condit made him a star in the sport, and his legendary hospital fistfight with Joe Riggs, which ultimately lead to his removal from the UFC, made him an infamous legend.

Nick Diaz was the trash-talker before all other trash-talkers.  A street-smart, quick lipped, dedicated martial artist who would just as quickly bow on the mats as he would flip the finger to an opponent. Yes, the Diaz brothers are synonymous with combat, but Nick Diaz’s name stands alone as one of the most enigmatic and honest personalities to ever grace the cage. He’s never laid down on his opponent, he’s never asked for an easy opponent, all he’s ever asked for is a true fight, a test of wills and martial prowess to determine who is the best, and who is mentally weak.

Now, after the end of his suspension for his third failed drug test for marijuana, Diaz may make his return to the cage and continue to assert himself as one of the sport’s most marketable stars, despite his obvious aversion to all forms of publicity and media obligations.

His honesty is something unique in modern MMA. As larger-than-life characters like McGregor and Chael Sonnen began to dictate the direction of marketability in the world’s fastest growing sport, Diaz’s shy demeanor but intense trash talk resonated BECAUSE it wasn’t gimmicky. Diaz’s legendary quip to Mayhem Miller “Don’t be scared homie” wasn’t meant to illicit laughter, it was a legitimate challenge.

Diaz is a fighter’s fighter, a man who shuns the spotlight and glimmer of the show in exchange for combat and a chance to show the world that he’s one of the best to ever scrap. When Diaz fights, you can’t help but feel that you’re watching something special, and many crowd the televisions and computer screens to see the antics that will follow.

Laying down in the middle of the cage opposite Anderson Silva, goading him to come fight. Open hand slapping Carlos Condit mid title-fight and telling him to engage. His hands raised high above his head, telling a young Robbie Lawler to give him his best shot before Diaz sent “Ruthless” tumbling to the canvas. His artistry transcends just his skill, as his antics and athleticism blend into a seemingly unstoppable force in the cage that only the greatest can withstand.

Now, with his suspension over, and the UFC’s welterweight division on it’s head, Diaz can strike at the heart of the corps of fighters and re-establish himself as one of the divisions’ best ever. With old rival GSP contemplating returning, the recent title defeat of Robbie Lawler, and the return of Carlos Condit from his brief retirement, Diaz will have his share of dance partners. All we can do is sit back and enjoy the show as MMA’s original bad boy has returned, and the division is put on notice.

Get ready boys, there’s a new (old) sheriff in town.