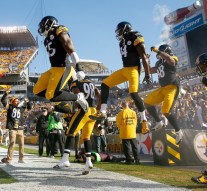 Along with Green Bay and New England, the Steelers have been one of the hallmarks of consistency in the NFL for as long as anyone cares to remember.

As rigid and traditional as the Rooney family can seem, the organization, from a cultural perspective, has shown an innate ability to change and adapt with the times. The offense during the Roethlisberger epoch is a perfect example: think back to 2004 when Big Ben, then a rookie, went 15-1 by handing the ball off to Jerome Bettis and Deuce Staley and barely dropping back to pass. Now cut to the Steelers’ pass-happy offense that you see in present day, whose productivity sits completely on Ben’s powerful right arm. Pittsburgh could have easily done what other franchises do all the time, and stuck to their guns by refusing to abandon the defense and running game identity they forged in the 70’s, yet they instead evolved with the league by letting their star QB rock out with his glock out.

Very much like the Chargers whom I wrote about earlier, this team is starting to feel the clock tick louder on their aging 1st round 2004 QB. For years, the only team black and yellow had to worry about was the Ravens, but the rapid emergence of the Marvin Lewis/Andy Dalton Bengals in recent years has severely complicated the Steelers’ path to a super bowl. Even though they’ve had tons of success, it seems a while since the Steelers have had that truly dominant ’13-3′ type year. Instead they’ve hung around the 10-6 range, seemingly playing with an on-off switch like so many talented teams do.

In that way, Pittsburgh’s kind of like that attractive teacher you had in middle school. You knew she was stunning when she wanted to be, but she put forth little to no effort on most days with her hair up in a bun, while she wore some frumpy blouse from The GAP. Let’s see if this talented team decides to wear their push-up bra and 3-inch heels to the 2016 NFL season. If so, they may just be the bell of the ball.

If Roethlisberger and Antonio Brown stay healthy, I see no way they finish outside the top 5. As good as LeVeon Bell is, last year you saw how little they actually needed him once DeAngelo Williams stepped in and was 85% the player Bell was. Two years ago, the Steelers became only the second team in NFL history to have an offense that featured the leading passer, leading rusher and leading receiver in the NFL. The only other team to have as prolific a three-headed monster were the “Peyton to Marvin” Colts a decade ago…and yes, that Colts team had the leading rusher too, Edgerrin James was better than you remember.

Unfortunately for the Steel City, both Bell and Martavis Bryant enjoy using cannabis, and other methods of self-medication, so they will both be serving suspensions this year with Bell out the first three games, and poor Marty missing the entire season. In Bryant’s absence, the Steelers have disappointing 2012 2nd round pick Markus Wheaton to step right in, and I am not sure how productive he’ll be; imprecise routes and ‘dropsies’ have plagued his underwhelming career thus far.

It seems every few years, we as football fans fall in love with a freskishly athletic TE, likely from a basketball background, whose production on the field never seems to be commensurate with his raw athleticism. For years it was Donald Lee of the Packers, then it was Jared Cook before he was run out of Tennessee…now it’s Ladarius Green. Green, an import from the Chargers, will surely capture Steeler fans’ imaginations once he gets off the PUP list. As the man tasked with replacing Heath Miller, he has big shoes to fill.

In the 2010 season, the Steelers went to the Super Bowl despite Roethlisberger getting sacked more than any other passer that year. It’s safe to say that the Steelers O-line has come a long way. David DeCastro tore up his knee in training camp of his rookie year and missed the entire 2012 season, but the former 1st rounder has been money ever since. In addition to him the Steelers also have fellow pro bowler Marquise Pouncey (the better Pouncey, sorry Mike) who missed the entire 2015 season with a broken leg. Barring injury this line will do whatever they want in the trenches.

Very much like the rival Ravens, this Steelers defense is living off reputation at this point. They are nowhere near the unit they were throughout most of the 2000’s, nor are they the ‘Steel Curtain’ of yesteryear. Unlike the Ravens though, the team as a whole will be just fine because they have a real NFL franchise quarterback (oh damn, shots fired!!).

Other than the ageless James Harrison, who’s totally not on PED’s or anything, most of the names that you remember from the Dick LeBeau years (Polamalu, Ike Taylor, Lamar Woodley, Brad Keisel) are gone. Luckily for Pittsburgh though, “out with the old and in with the new” is something that they do very well. There is a lot of young talent to get excited about on this defense. 2011 first rounder Cameron Heyward is quietly one of the best 3-4 ends that the casual fan has never heard of; he’s the reason they were able to let the grisly-bearded Keisel go, and he will continue to swallow ball carriers whole in the backfield. 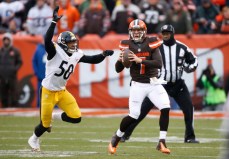 As far as veteran talent is concerned though, he and reliable-if-not-unspectacular safety Mike Mitchell are all this defense really has. The meat and potatoes of the unit lies with the youngsters. 2014 1st rounder Ryan Shazier is that super rangy type of LB who would probably be playing safety had he been born 15 years earlier. Shazier came on strong last year after a disappointing rookie season and will be expected to take a big step forward this year. He has that rare ability to cover guys in space just as well as he rushes the passer.

The Steelers also drafted a pair of defensive backs early, in CBs Artie Burns and Sean Davis in the first and second rounds respectively, the latter of whom projects more as a safety. Bottom line with this defense is there is more youth and athleticism than there is consistency, but its precisely the type of unit that can potentially thrive if the offense plays well on the other side of the ball. That is to say, that if Big Ben is constantly giving this defense a lead and they can play with their hair on fire, instead of having to read and react, good things will happen.

This team is fucking good. They have a chance to score 500 points on offense, and the better their offense plays, the better and more aggressively the young D will play for reasons mentioned above. We already know about the offensive talent, but following in the footsteps of LeVon Kirkland, Kendrell Bell, Joey Porter and others, Shazier could be the next great Steelers LB that people fall in love with.

Black and Yellow will take the division at 12-4 this year, and lose in the Super Bowl in a rematch with the Packers six years later.