At a glance: We didn’t know it at the time, as he limped off the field during that muggy August afternoon this preseason, but who in their wildest of dreams would have thought that Jordy Nelson meant THAT much to this formerly unstoppable Packers offense? Since 2009, the Packers had finished in the Top-5 in offensive DVOA every single year except for 2013 (that was when Discount DoubleCheck missed 6 games with a collarbone). Even the most ardent cheesehead fanboy will tell you that the Packers underachieved this year, and if you flip that narrative on it’s head, you get the Washington Redskins. Finishing at 9-7 and winning their weak division, you can paint a picture that says that the Redskins had the most successful season this year of any team, given the expectations. Here’s what’s gonna happen: 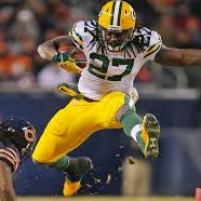 When the Packers run the ball: As an Eddie Lacy owner this past year, I can personally attest that the rekindling of his love for barbecue ribs has worked as a detriment to his football career. It’s funny how us fans perceive plodding/non ‘home-run’ hitting backs like Lacy: When a powerful RB shuffles his feet before hitting the hole, there is always a fine line between “running patiently” (good) and “running hesitantly” (bad). Perhaps incorrectly, whether or not the RB gets put into the former, or the latter category has much more to do with the result of the play, than anything he did stylistically. That’s how this season has been with Lacy: Most of his runs look exactly the same…whenever he waits for a hole to open up and squirts through it for 8, people praise him for his vision…but whenever he plows into the line for ten inches, people lament him for being “hesitant” and you get to hear Joe Buck talk about his weight gain. Luckily for burger boy and the rest of the Pack, the Skins can certainly be had on the ground, as they finished 26th against the run. Terrence Knighton has underratedly been a non-impact signing for them; he has not clogged holes at nearly the level he did in Denver. Granted…having Perry Riley and Mason Foster cleaning up behind you isn’t quite like having Brandon Marshall and Danny Trevethan. Speaking of those Redskins LBs, they are both questionable for the game, and should they not be able to go, Mike McCarthy may decide to pound the rock to protect Rodgers and keep the oh so mighty Kirk Cousins on the sideline. 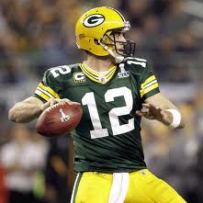 When the Packers throw the ball: Herein the highest variance proposition of the game: You can easily envision a Monday morning where we are sitting here talking about the Packers returning to form after they churn out 470 yards of offense and 35 points, but you can also see a world where on Monday we are eulogizing the 2015 Packers as the team that “never quite looked right”. What will Rodgers look like? Astounding to think that this is even a question, but Rodgers has not been himself this year, whether it has been the loss of Nelson, the defrauding of Cobb as a not-true #1, the 2nd year stagnation of Adams as “just a guy” or the poor play of the offensive line. Speaking of the fatties up front, if David Bakhtiari (highly questionable) can’t go, then look for the Skins to line Kerrigan up over left tackle, and that may be a REAL issue for Green Bay. The Pack finished an absolutely mind boggling 23rd in total offense this year…23rd! I think their success through the air depends on two things, in this order:

When the Redskins Run the ball: Weird, weird year for the Skins rushing attack. In one corner, you have Alfred Morris, the incumbent, who pounded my beloved Dolphins for 120 yards in the opener, then didn’t do much the rest of the way. And in the other, you have the spry young legs of Matt Jones, whom Gruden clearly wanted to win the job outright, show just as much ball-security issues as explosion this past year. This matchup will really be softie against softie, as the Skins rank 20th in rushing and the Pack rank 21st in stopping it. If on the first two drives of the game, Morris and Jones combine for 14-ish yards on their first 8 carries. I can easily see Gruden saying “f__k it”, and letting Cousins win the game by throwing it 45 times. (That last sentence is nowhere near as scary to Skins fans as it was as little as 3 months ago…amazing how quickly things change in the NFL.) 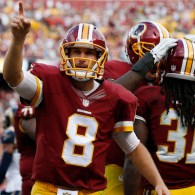 When the Redskins Throw the ball: YOU LIKE THAT?!?! Cousins’ checking account certainly does. Depending on how long term a deal the Skins wanna offer him, Kirk Cousins made himself a ton of money in November and December of his walk year. He basically went from the Brian Hoyer/Matt Cassell-type career path (solid backup, spot starter, $4.5 MM/year guy) to a potentially lucrative 9-figure franchise QB payday. As tempting as it may be to sling the ball around with Cousins, that may not be wise considering the Pack finished 6th in pass defense DVOA, 6th in yards, and top ten in disaster plays (sacks and picks). There is a reason the Packers have been able to north of average this year, and that’s due to the growth and promise of Clinton-Dix, Morgan Burnett, and Casey Heyward, all Packers premium draft picks in the last half-decade. Here are some things to look for:

Specials/Intangibles/Coaching: McCarthy with the obvious edge here, as he has been down this road a million times before. I still am not comfortable with either kicker in a tight spot, and FedEx Field is a NOTORIOUSLY soddy and difficult place to nail a kick of 40+. I normally am not a “magic” guy…but there is just something magical about Kirk Cousins this year. If the game is in his hands after the two minute warning, the Redskins are winning the game.

HBT’s Prediction: Green Bay–23, Washington—27. The ledger could easily flip 23-27 the other way, but I just don’t think the Packers are very good this year. Skins are home, crowd will be into it in a big way. I don’t like either of these teams against the Panthers or Cardinals, but this will be a very feel good win capping a feel good season for Washington.