At a glance: So here we have it folks, a battle-royale of sorts between the two teams whom were widely considered to be the cream of the NFC crop from start to finish (Atlanta’s 5-0 start notwithstanding). Given all of the Flacco/Eli wild-card madness that we have seen in the NFL over the past decade, isn’t it refreshing to see the playoffs go chalk for once? That’s what we have this year, a Conference Championship weekend where the four participants were truly the two best teams in each conference, variance be damned. To anyone who still thinks turnover differential is an overrated metric: consider that the Cardinals and Panthers ranked #1 and #2 respectively in takeaways this year, and while their offenses did their fair share of scoring on their own, having a short field has certainly helped both squads considerably.

Over the course of the NFL year, there were reasons why many were not taking the Panthers seriously, despite their racking up wins hand over fist. One reason was simply that Cam Newton was ever-so-quietly sporting a sub 80’s passer rating and was being carried by his defense for the first two months of the season. The other reason, and more telling one to this day, was that they hadn’t played anyone of note: per PFF the Panthers faced the second easiest slate of opponents this year, as measured by cumulative W/L record and point differential. I mean hey, when 10 of your 16 games are against the “we-only-care-about-NASCAR-down-here” AFC and NFC Souths, this is the type of thing that can happen. The RedBirds on the other hand faced the 16th toughest slate, which is the spitting image of league-average, and I think that is why despite being 2 games “worse” than the Cats, Vegas fancies this two teams as evenly matched on a neutral field. Let’s dive in: 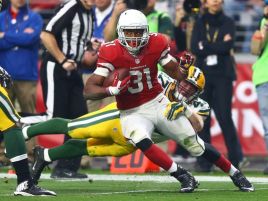 When the Cardinals Run the Ball: They need David Johnson (QST) to be 100% here in the absolutely worst way. It seems like forever ago that Andre “Juke” Ellington was the up and coming flavor of the week among fantasy nerds, and that’s because he really has not done much over the past two years. Don’t let that gaudy 6.4 YPC against drawn back defenses on 3rd and long fool you, Andre Ellington is far from an every-down back in the NFL, and if Johnson can’t go, I see no way the Cards go over 100 on the ground. The Cats finished a suffocating 4th against the run in 2015, much of that due to the terrestrial clogging of Ealy, Short and Lotulelei, all high draft picks whom I initially chastised GM Dave Gettleman for picking (I wanted weapons for Cam). Gettleman knows more than I do, because other than the Jets, I cannot think of a run-stuffing front that has been so successfully built from the draft in recent years. My prediction here: Arizona rushes for 70ish yards and sports a >4.0 YPC average, but they can still win with those numbers.

When the Cardinals throw the ball: I think there truly is a yardage confidence interval that Palmer needs to hit here in order to win the game. Way I see it, if he throws for more than 370, that’s probably a bad thing, and means the Panthers had the lead the whole time. If it’s under 300 though, chances are he didn’t do enough through the air. Despite his final numbers looking good (a Larry Fitz 75 yard catch & run will do that), Palmer was far from great against the Pack last week. As I predicted, his jitters and long absence from big games reared its ugly head, and he was off on a number of throws, including the absolute lollypop of an interception he threw in the end zone, which was straight up Sanchez-ian. 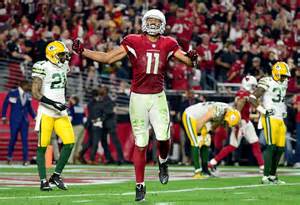 Very much like the Seattle game, I wonder whom Carolina decides to assign Josh Norman to. My guess is Larry, just because while the two other guys can hurt you with bigger plays, Fitzgerald can just torment a defense underneath, and the last thing the Cats want is for Arizona to rule T.O.P. by converting a bunch of 3rd and 6’s. Former Phin great and post-whistle-scuffle enthusiast Cortland Finnegan will likely get the Brown assignment, and this can end poorly if the line gives Carson time to launch it deep. Palmer, normally statuesque in the pocket, was sacked only 25 times in 2015, which in today’s pass-happy league is nothing. It’s truly a testament to how in the NFL, if you just simply keep on throwing money and high draft picks at your O-line, eventually you’ll figure it out. I think win or lose, the Cards move the ball well through the air here, because the one thing the Panthers do BEST against the pass, which is cover non-WRs with Kuechly, Davis and Thompson, the Cardinals are never really interested in doing. They don’t use the TE, and rarely use backs: this is a downfield offense, and Carolina’s questionable deep secondary will be tested. 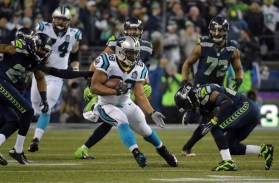 When the Panthers run the ball: This will pit one of the best running teams against one of the best teams at stopping it. When you look at who the Cards have up front, other than 2008 Super Bowl attendee Calias Campbell (yes, he’s been there THAT long), it’s not a lot of guys that the casual fan has heard of, but they are good. Granted, a lot of the Cards’ 6th ranked finish against the run was simply by virtue of the fact that teams were regularly down a lot and had to abandon the run entirely. Truthfully, I’m torn here: half of me thinks Cardinals’ HC Bruce Arian will clog the box to “make” Cam Newton beat him downfield, but the other half realizes that treating Newton as if he’s Colin Kaepernick, and insulting him with single-high looks on the outside is just asking for trouble. Last week against the Hawks, I predicted Stewart would do very little on the ground, and while his 19/106/2 line made me look wrong, if you take away his 59-yard scamper (on the first play of scrimmage, by the way) he averaged 2.6 YPC on the day. Same thing will happen here; Arizona will not let the Cats move the ball consistently, and will bring safeties up in run support. As far as defending the read-option, I think the Cards will be more than well-equipped, considering the fact that they play 4 games/year against Russell Wilson and the aforementioned Kaepernick. Cam is going to have to win this one with his arm… 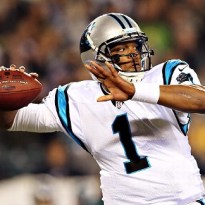 When the Panthers throw the ball: Speaking of Cam’s arm, it’s pretty damn good, and while I think that establishing the run will be Mike Shula’s first priority, if Cardinal safeties keep on sniffing around the box, he will let it fly. You ever seen a YouTube video of tiny little mongoose hop on the back of a huge cobra snake and bite it to death? Well, that’s kind of how Tyrann Mathieu manages to cover TEs who regularly outweigh him by 60 pounds. Given that Greg Olsen is lining up on the other side, and that Mathieu is out for the season with an injury, this is a less than ideal situation for the Cardinals. Having said that, I am a true believer that much like having a pass-first point guard be your best player in the NBA, having your Tight End be your best pass catcher is not a good thing in today’s NFL. With the Panthers underwhelming Wide Receiver core, and given that the Cardinals forced 35 takeaways this year, Cam could be in for one of his longer days. I think he turns it over at least once, and this may finally be the game where the Panther’s lack of playmakers on the outside finally catches up to them. The biggest X-factor is Devin Funchess. I’ve watched a lot of film on him this year, mostly because his position-less nature intrigues me, and I still have no idea what I think he is. In my opinion, he projects to be anyone from a bigger and more dynamic Charles Clay, to a total bust who isn’t fast enough to be a WR, but way too soft on the L.O.S. to be a reliable TE. Arizona will be able to cover him with safeties without worrying about being burnt deep, which is not good because that means they will have extra run support at the line. At the end of the day: Peterson will completely erase Ginn, and unless Olsen has a great day against the likes of Rashad Johnson impressive rookie Markus Golden, this could go south for the Cats before the 4th quarter. 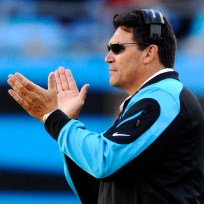 Specials/Coaching/Intangibles: ‘Riverboat Ron’ Rivera and Bruce Arians are two of the most aggressive coaches in the NFL when it comes to in game decisions, and I think you definitely see that play out here. I don’t trust either Gano or Catnazaro in a big spot frankly, and if the weather is an issue this game (Carolina isn’t that far south, it snows there) then kicking can become a very tenuous dance. Ginn and Peterson are great returners, and if the punters aren’t careful and the return teams slip and slide their way out of lanes, this one could be decided by a special teams play. As far as who has the magic: Despite being a decade younger, Cam has been in more games like this, and Carson’s lukewarm and uneven performance last week does not give me confidence he will be steady here on the road. Or, you can look at it from the opposite perspective and argue he got all the bad throws out of his system? Football is weird, man.

HBT’s prediction: In my heart of hearts, I think Arizona is the slightly better team, and the fact of the matter is the Panthers have not faced an offense of NEARLY this caliber before this year. Put on the tape of the Saints game and the Giants game 3 weeks later, and you’ll see that a good quarterback can slice this Defense if he gets time. All year, Carolina has been able to skate by with their pedestrian WRs, and that is because they haven’t had to keep up with the California Kid. That changes on Sunday.