The thrilling conclusion to yesterday’s Part 1 of the New York Rangers Midseason Grades, this time taking a close look at the Blueshirt’s Defenseman and Goalies.

Dan Boyle: Another player that falls into the “unrealistic expectations because of his contract” category. Is he capable of living up to his 4.5 million cap hit? Not at this point, but for a 39-year-old, Boyle’s done fine. He knows where to be and what to do, his legs just can’t always get him there anymore. Not the reason for the Rangers’ defensive struggles. B

Dan Girardi: No one will ever question Girardi’s toughness, and he has been playing injured for much of the 1st half, but even so, the last year and a half his play has taken a turn for the worst. Once considered a safe, stay at home defenseman, the alternate captain has developed an alarming penchant for making high leverage mistakes. At just 31, the fall should not have been this fast. He needs to be much better. C- 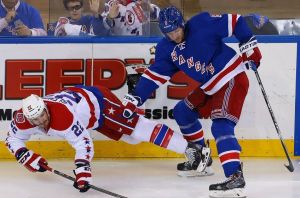 Kevin Klein: Klein, when healthy, has been the Rangers best defenseman. Last years goal output (9 in 65 games) likely won’t be something he ever duplicates again, but the 31-year-old moves the puck and has been stellar in his own end. A relative bargain at 2.9 million per year, Klein has seen his ice time climb to over 20 minutes per game as both a reward for his own play and as a response to those struggling around him. A-

Ryan McDonagh: While McDonagh’s offensive number have bounced back, his play in his own end has been inconsistent. Since being dubbed a rising Norris Trophy contender in 2013-14, the Blueshirts lone all-star has failed to find that kind of form again, and has settled into being merely good, instead of great. Removing the shackles that are Dan Girardi and pairing Captain Mac with someone like Klein could help his game improve, but pinning all McDonagh’s struggles on his partner is a flimsy excuse at best. B-

Dylan McIlrath: Many (me) have long questioned the selection of McIlrath 10th overall in the 2010 draft. While he’ll likely never live up to that lofty draft status, and mention of his name will always prompt “what ifs?” (Vladimir Tarasenko was taken 6 picks later), McIlrath has been a pleasant surprise. Coming into the year, there were serious (and legitimate) questions about whether the big man could play in the NHL at all, but after 17 games of solid work, McIlrath appears to have answered that question. B 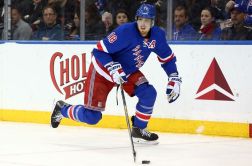 Marc Staal: The only thing that’s kept the middle Staal brothers’ struggles from drawing the ire of fans is the continued poor play of another longtime Ranger, Dan Girardi. But after a stellar season last year, Staal has been matching Girardi blunder for blunder. It’s far from a perfect stat, but the 29-year-olds plus/minus of even is the lowest amongst the Blueshirts’ 6 regular defenseman, and the 19:38 he’s playing per game is his lowest since his rookie year, indicative that Alain Vigneault is acutely aware of the veterans struggles. C

Keith Yandle: Yandle brings a much needed dimension of mobility and offensive acumen to a Rangers’ defensive unit that even at its best, is a tad redundant. Unfortunately, as a UFA at the end of the year, it’s likely the Boston native is dealt before the deadline. He’s not perfect defensively, but after taking his lumps when coming over at the deadline last year, it appears Yandle has finally settled in on Broadway, and is 4th on the team in points. B+ 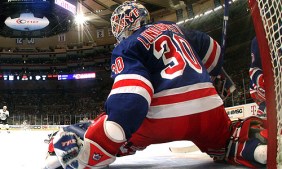 Henrik Lundqvist: The first 20 games of the season, Lundqvist was impenetrable, but as the Rangers have struggled, so has the King, who has posted some decidedly un-king like numbers of late: an .892 save percentage in December, with that number rising to a pedestrian .907 in four January games. Granted, he’s had little to no help, as at times the Blueshirts have closely resembled a dog chasing its tail in their own end, but through half a season, Lundqvist’s .920 save percentage is the same as the likes of Devan Dubnyk, Reto Berra, and Jacob Markstrom—not the type of company the former Vezina winner is used to keeping. B-

Antti Raanta: Raanta has carried the mantle of Cam Talbot before him and done an excellent job backing up Lundqvist. In 8 starts, he’s surrendered more than three goals just once, and his numbers are as good or better than the Kings (in a much smaller sample size, mind you), which is all you can ask for from a backup. B+