The midseason of the NHL season has arrived, so now seems like the logical time to examine the Blueline of the New York Rangers. Here is a list of midseason grades for the Rangers, focusing on their Forwards. Be sure to check back for Part 2 as I dive into the Defensemen. 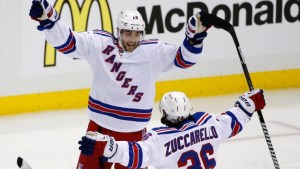 Derick Brassard: Brassard, along with Mats Zuccarello has been arguably the Rangers’ top/most consistent player. With 31 points and 15 goals, the center finds himself on pace for career highs across the board just passed the season’s official midpoint. Can’t ask for anything more than that. A

Jesper Fast: The slender Swede has done solid work stepping in to fill the void left by departed countryman Carl Hagelin. Fast is not a goal scorer, but he does the little things, and is an excellent penalty killer. With 7 goals, he’s contributed enough offensively to avoid being deemed a disappointment. B

Tanner Glass: Listen, he is what he is, and for what’s expected of him, he’s been fine. Glass hits, fights when called upon, and otherwise does his best to stay out of the way. You can do worse for a 12th forward, and for a team that frequently lacks a physical edge, he fills a need. C+

Kevin Hayes: After a strong rookie season, the 23-year-old has been one of the season’s biggest disappointments. Expected to take a leap forward in year two, Hayes has instead regressed, and often looked timid and disengaged on the ice. He’s been marginally better since being scratched twice, but even that slight uptick in play couldn’t salvage a dismal first half. The littlest big man in the league, Hayes could use a reminder that he is in fact 6-5. C- 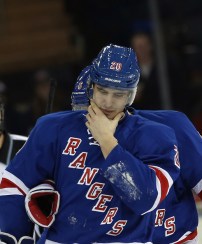 Chris Kreider: See above. Everything said about Hayes doubles for Kreider, except the “sophomore slump” excuse doesn’t apply for the 4th year forward. Kreider has been mostly invisible, to the point that even his torrential speed hasn’t been noticeable on the forecheck or on the Rangers’ patented alley-oop plays of years past. A pending RFA, Kreider could find himself trade bait as the deadline nears. D+

Oscar Lindberg: Ranking as one of the Rangers few pleasant surprises upfront, the rookie paced the team in goals for much of the first half—the problem is, of the 11, only two have come since December. Even still, Lindberg has shown he can be a solid two-way contributor at the NHL level, if not necessarily a star. B+

Jayson Megna: He’s brought much needed energy in his three games as a Ranger, though the two-point performance in his first game is surely an anomaly. Incomplete

J.T. Miller: After the Rangers’ top trio of Zuccarello, Brassard, and Nash, Miller is actually 4th amongst forwards in points with 20. The third year pro brings energy and a physical edge night in and night out, and lately, has been rewarded for his efforts with an uptick in ice time. If he sticks in the top-6, it will be interesting to see what he can do with the bump in playing time. B

Dominic Moore: After a slow start (just two points the first two months) that had people wondering if he was finished, Moore has rebounded and been his old self since December. He wins faceoffs, kills penalties, and chips in the occasional goal—which he has a knack for coming up with in big spots. As far as 4th line centers go, you can do a whole lot worse. B

Rick Nash: Big 61—perhaps predictably—is in the midst of a down season after a career year in 2014-15. With just 12 markers, Nash will have to pick it up to notch his 9th 30-goal season. But unlike poor statistical seasons in the past, this time Nash has been healthy—he’s just not playing that well. The 31-year-old is on pace for his lowest shot total in a full season (75+ games) since 2006-07, indicative of the lack of aggressiveness he’s displayed far too often this season. He needs to show more, and if he doesn’t, and the Blueshirts continue to slide, Nash could find himself on the way out. C+

Viktor Stalberg: Big, fast, and relatively mistake free on the ice, Stalberg has done fine for a bargain basement signing in the offseason. Sure, for those expecting him to regain his 20-goal form from 5 years ago he’s been disappointing, but that was never realistic. B 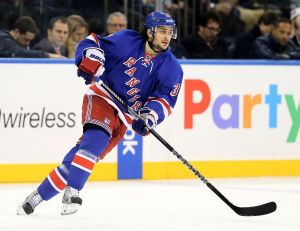 Derek Stepan: Another player the Rangers need more from. Sure, a rib injury disrupted his first half, but 7 assists through 32 games is phenomenally low for a player that at his best typically averages a helper every .5 games. At a $6.5 million cap hit, he’s no bargain, either. B-

Mats Zuccarello: The heart and soul of the Rangers is already four goals away from setting a new career high, and if he maintains his current pace—and stays healthy—has a chance to set a new personal best in points as well. The Hobbit brings it every night, and plays like a man twice his 5’7” stature. He tends to slump when the duo of he and Brassard forget to shoot—which happens from time to time—but the Norwegian has been the Rangers best player through the seasons’ first half. A