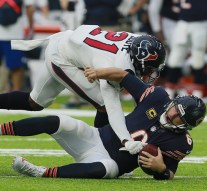 Robert Mays, the criminally underrated writer for Bill Simmons’ “The Ringer” said it best in a tweet that he sent out literally 30 minutes before I sat down to write this article:

“Jay Cutler has quarterbacked my team for twice the amount of time you spend in college. Really think about that for a second.”

Twitter is a fickle beast indeed, and it’s sure as hell not easy to say something so sad, yet so profound in 140 characters, but Mays really nails it there. If you are a Chicago Bears fan Sophomore year in high school or younger, this moody and aloof gunslinger is literally all you are old enough to remember about Bears Football.

So how did we get here anyway? In what world is a Quarterback with as many negative qualities as Cutler able to hang onto a starting job for two presidential terms, especially in a sports market as robust and intolerant of losing as Chicago?

The Cutler Saga is a perfect marriage of the three main factors that always seem to come into play when a mediocre quarterback keeps getting chances to turn it around:

At some point though, you have to pin it on the QB, as the excuse train grinds to a sobering halt. You want a good way to alienate yourself among Bears fans at a bar? Play this game with them: Ask them when they personally realized that Cutler wasn’t the long term answer at quarterback. You can tell everything about a Bears fan’s level of knowledge by their answer to this question. Since I’m the man, I’ve even made you a little timeline to illustrate my point:

Now granted, it is hard for both team and fan to admit fault and ‘punt’ on a signal caller, especially one they have invested in so heavily. It is the most important position and the teams that continually win ever year are the ones with stability at the quarterback position. But after a certain point, reality must be faced, and the reality is Jay Cutler is simply not good enough.

This is a public service announcement to all NFL fans who are currently going on year 3 or 4 with a young quarterback that hasn’t made the playoffs yet:  DON’T. GET. SUCKED. IN.