It’s here. The day we’ve waited for all season. The day we can finally say goodbye to the dead and dying brackets we’ve made and bury (or burn, depending on your preference) them along with our hopes for perfection. For those of you who had Villanova facing North Carolina in the championship: congratulations. Rejoice in your foresight and basketball instinct. For those who have floundered along since the Round of 64 ended, hopelessly clinging to the hope that one of your teams would make the final four: Rejoice in the Final Four of HBT’s Mascot Madness.

Check back tomorrow for the epic conclusion of our first ever Mascot Madness!

64 entered, four remain. Humans, animals, vehicles, blobs, we’ve seen it all. Our four remaining schools combine their unique identity with a deep history and a passionate fan base.

How they got here:

CAM the Ram occupies a unique spot in our final four as the only mascot that can not only be found at other schools around the country, but is shared by another school in this tournament. CAM is also the lowest remaining seed and had to beat the likes of the mascot powerhouse Kansas Jayhawks. He made it through the tournament based on a can do attitude, a winning spirit, and an impressive horn curl.

The Sooner Schooner is the physical embodiment of the fast yet rickety ride that it took to the Final Four. Many expected an earlier exit from the covered wagon after meeting icons like the Hawk and Hook ‘Em. History was the name of the game for Boomer, Sooner, and the whole Schooner crew. Remember where you come from and you can always move forward.

CSU Alumni have a fundraising campaign that they call “CAM Forever” which will support daily care for the current ram, as well as travel costs and other handler needs. Last September, CAM 24 passed away after four years of dedicated service. His half-brother, CAM 25, is expected to take his place on the sidelines in a continuation of the family blood line. To be the next CAM, a ram must represent strength, integrity, and power.

A foundation was set up in 1964 to provide scholarships to support the OU mascot. This is not unique to the mascot world, but its 52 year history certainly is. Conestoga wagons remind Oklahoma faithful not just of their University, but of the state’s founding as well. Created 12 years ago, Boomer and Sooner continue to act as a representation of the student’s commitment to furthering the mascot face of OU. The Sooner Schooner once received an all-expense paid trip to LA to appear in a commercial.

CAM has had a truly impressive run, but at this stage in the tournament, you need a special something to surprise your opponent and give them something they haven’t seen. In the end, a ram is just too common. 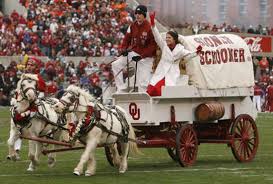 How they got here:

During its dominant run, West Virginia truly became a place we all belong. After a close encounter with the only mascot remotely similar, the Mountaineer was able to advance based on the complete package it brought to each game: the uniform, the props, and the support from the school. They beat the blue blob, beat the blue-horned tar heels, and seek the beat the boilermakers in another alliterative achievement.

Chugging along after an upset victory last round, the Boilermaker Special reminds us of the little engine that could, both in the fact that it is a literal train and it just won’t quit. This locomotive is capable of going toe-to-toe with the most traditional schools because it has a tradition all its own. The tag-team duo of steam engine plus Pete is a combo that strikes fear into the hearts of its opponents.

Purdue Pete is the hard-working, hammer-wielding, Thor-reminding half man half mascot we need. His arms may be flesh, but his head is an impenetrable fiberglass crown. He’s had five major makeovers from his humble days as a papier-mâché head and he’s still not the main mascot on the Purdue campus. We’ve discussed the Boilermaker Special at length but we can’t forget to acknowledge the other hybrid in West Lafayette: The Boilermaker X-tra Special is part train part golf cart.

Being the Mountaineer is a big responsibility. He attends roughly 250 non-sporting events a year and one estimate has shown weekly travels totaling 2,500 miles, making it clear that his training is a big part of his tournament success. The Mountaineer must combine his physical abilities with mental fortitude; the application process involves essay questions, references, a rigorous time commitment, interviews, and oral and written skills.

Pete’s head is iconic, but just a bit too…unimpressed? Though a few different versions of the mascot’s head exist, he always seems to look underwhelmed, no matter the outcome. Oh, and remember the Mountaineer’s rifle? Well, turns out it works with live ammunition as a former Mountaineer demonstrated on a bear hunt.

And then there were two… Check back tomorrow to see who will take it home. West Virginia or Oklahoma?