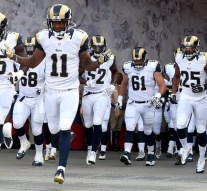 Gurley was one of the NFL’s best running backs at grinding out yards after contact and one of the best at making defenders miss in the first place. He was one of few joys to watch on the Rams last season and should continue to be so this year. The one area Gurley could improve is consistency. He showed a propensity for the big play, but he needs sharper focus on making positive gains every time he touches the ball. He also isn’t much of a threat in the passing game, but we’re picking hairs here. No one should be surprised if he’s the NFL’s best running back this year. If he gets injured, the Rams are screwed. Benny Cunningham is a nice piece out of the backfield in passing situations, but he should never be counted on as an every down back.

If any Rams fans are reading this, I hope you enjoyed that paragraph, because the rest of this section will change that.

The Rams traded their entire draft to move up and select rookie quarterback Jared Goff and they were right to do so. The Rams have needed a quarterback since Marc Bulger left the team and another season of Nick Foles was not a viable option. The immediate problem with Goff is that he comes from an offense at Cal that asked him to play nearly exclusively out of the shotgun. Gurley’s relative weakness as a receiving target last season meant that he hardly played out of the shotgun at all. This puts the Rams in the awkward position of being unable to play to their Quarterback and best player’s strengths simultaneously. There’s no choice. You have to let Todd Gurley be Todd Gurley and let this season be Jared Goff’s adjustment to life under-center.

Unfortunately for the Rams and for Goff, he will have no help from his offensive line or his receivers as he attempts to negotiate this very steep learning curve. If there is a less-impressive set of receiving targets in the NFL, I sure can’t find it. Tavon Austin is still riding his college reputation to a completely undeserved status around the NFL as a boom-or-bust big play wide receiver. Austin averaged a meager 9.1 yards per reception last season and had 12 games where he did not register a catch of 20 yards or more. Tavon Austin is not a good NFL wide receiver to this point. Neither, for that matter, is no. 2 Kenny Britt or any of the late-round rookies LA picked up in the draft for depth. The cupboard is bare here.

Those bad receivers won’t have any time to get open either as the Rams should be right in the running for the worst offensive line in the NFL. Greg Robinson has the look of a bust, regressing badly in his sophomore campaign a year ago. Rob Havenstein didn’t have as bad a season as the Rams’ other bookend, but his play was not nearly enough to compensate for the rest of the line’s failings and that should hold true this year. The Rams have poured a lot of resources into the line and there is young talent that has yet to lead to results. It’s possible that the ceiling here is something close to respectable, but I highly doubt we see it in 2016, if ever.

Like the offense, the Rams’ defense has one unit worth gushing about and little else. This defensive line really is something else. Defensive Tackle Aaron Donald would have won Defensive Player of the Year last season if not for J.J. Watt continuing to break football. He’s dominant in the run game, occupying more attention than any defensive lineman in football and he’s the League’s best pass-rushing defensive tackle.

Playing alongside Aaron Donald will make life easier on anybody, but defensive end Robert Quinn would be pretty damned good regardless. Quinn’s season was shortened by injuries in 2015, but he’s been one of the League’s premier pass rushers of the last five years and there’s little reason to doubt him recovering top form.

The Rams’ linebackers are solid if unspectacular in every way. Alec Ogletree has never quite done the trick for me, but he is well thought-of around the League as a solid middle linebacker. The outside linebackers on either side of him, Marc Barron and Akeem Ayers, are going to have to do a job in pass protection to provide as much cover as possible for a patchwork secondary.

Free Agency was not kind to Los Angeles, as two of their starters from a season ago departed for the more-forgiving climbs of the NFC East. T.J. Macdonald is a solid safety, but the Rams are in the unfortunate position of having to hand every-down roles to at least two defensive backs who are plainly not ready for them. E.J. Gaines is in-line to be this team’s first-choice cornerback, and he missed his entire sophomore season next year. That should say it all about the state of affairs in the back of St. Louis’ defense.

Jared Goff adjusts to life under-center quicker than anyone anticipates, having a rock solid rookie season. The offensive line reaches its mediocre ceiling, which is good enough to make Todd Gurley the NFL’s most productive running back of 2016. A great pass rush and run defense provide enough cover for the secondary to propel Los Angeles to an League-average defense.

The offensive line is a shambles the entire season. Gurley’s brilliance allows for the occasional big play mixed in with a lot of 1, 2, and 3-yard gains. The problems in the secondary lead to Goff playing from behind for much of the season, throwing way too many passing attempts and way too many interceptions. This is one of the worst teams in football.

The Rams have been the butt of many 7-9 jokes on this little site. This is the season that’s going to change. The Rams made a talent upgrade at Quarterback, but this just isn’t the kind of situation that you would draw up for a young QB adjusting to a new style of play. It may, in fact, be the opposite. I don’t like that playing to Goff’s strengths means taking the ball out of Todd Gurley’s hands, nor do I like how bad this offensive line could be. The receiving corps probably will not help Goff much and I don’t trust this secondary to keep Goff out of must-pass game situations. Way more than any of those things, I hate that this team is in the NFC West. This is going to be a bad team.