Home / MMA / Will Raczkowski / Ladies’ Night at UFC 200: Is MMA the World’s Most Progressive Sport? 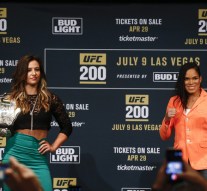 Since its inception, UFC 200 was billed to be the biggest night in the sport of Mixed Martial Arts’ history. A three day span of title fights, an international fight week in Las Vegas, fan expos, and a blitzkrieg media campaign preceded the much-hyped event, specifically to promote two of the biggest main events of all time.

Jon Jones vs. Daniel Cormier and Nate Diaz vs. Conor McGregor II would have easily been the record breaking fights needed to send the UFC into the stratosphere. These fights would be filled with the top fighters in the sport with entertaining (and highly-marketable) personalities to match. And just for good measure, the one and only Brock-freaking-Lesnar came out of retirement and was added to the card, ensuring that anyone who was anyone would be parked in front of a TV on Saturday night.

However, disaster struck, as both of the main events during the biggest moment in the UFC’s short-story became a question mark. Conor McGregor refused his media obligations in favor of increased training, and took on the UFC in a head to head battle over who really needed who to survive. His opponent Nate Diaz refused to fight for any less than McGregor, believing that after beating the golden boy, you should be paid like the golden boy. In the other fight Jon Jones (surprise surprise!) failed another drug test, ending that marquee matchup before it ever began.

With these two blockbuster fights losing their stars, how was the UFC going to fix it? Who would the UFC turn to in their time of need?

Enter Meisha Tate and Amanda Nunes. Two female champions called upon to headline (and save) the biggest card in the biggest event in UFC history.

In a time where Olympic gold medalists like Hope Solo and Alex Morgan hold signs featuring the hashtag “Equal Pay for Equal Play” the UFC proved Saturday night that, while cage-fighting is often thought of as barbaric and violent, it has proven to be immensely forward thinking, and extremely pro-women.

In many sports circles and media outlets, women’s sports are a joke. The WNBA is the punchline of many a radio-jockey quip, and the best female athletes in the world often struggle to make ends meet with the exception of a notable few. Not so in Mixed Martial Arts.

The sport’s Reebok financial bonuses depend on the amount of fights that an individual fighter has been in, as opposed to anything else including gender. A woman with three fights in the promotion makes the same in bonus money as a man with three fights.  Ronda Rousey’s “Do Nothing Bitch” campaign was embraced fully by the Ultimate Fighting Championship, and its female empowerment message was pushed in support of the Bantamweight beast that is Rousey.

On the eve of Tate vs. Nunes at UFC 200, Polish striker Joanna Jedrzeczyk and Brazilian powerhouse Claudia Gadelha fought in the straw-weight title fight main-event specifically meant to get fans fired up for the following night. The two brought the house down when the cage door closed, winning the coveted Fight of the Night honors, and continuing to enforce the blossoming movement that is women’s MMA.

When push comes to shove, the crowds are reacting to the UFC’s women’s divisions. Ronda Rousey was that catalyst, but other stars are beginning to shine as bright as any. Savage straw-weight queen “Joanna Champion” has become regarded as possibly the best striker in the UFC regardless of gender. Straw-weight beauties and overall ass-kicker’s Rosa Namajunas and Paige Van Zandt are stealing the hearts of the fanbase almost as quickly as they steal consciousness from opponents. Former champions Meisha Tate, Holly Holm and Michelle Waterson, thanks to their upper echelon skills and dynamic styles, are becoming the biggest stars in a sport based on grit, determination and toughness. Their blood is just as red as their male counterparts, their sweat and strength just as impressive, and the world is beginning to take notice.

For UFC 200’s main event, UFC President Dana White passed over Anderson Silva, Brock Lesnar, Jose Aldo and Frankie Edgar for main event honors. Instead he chose Meisha Tate and Amanda Nunes to finish the night, a true title fight between a true champion and a deserving challenger. Nunes won, defeating the always-game Meisha Tate and becoming not only the first Brazilian female UFC champion, but also the first openly gay champion in the promotion’s history. The largest night in the history of the Ultimate Fighting Championship ended with the coronation of a LGBT immigrant winning the highest honor in her respective competition.

Let that sink in.

When in men’s sports has an openly gay champion been not only presented, but celebrated? In fact, the sexual-orientation of the fighter wasn’t even a real focal point of the night. In the UFC 200 broadcast, Amanda Nunes wasn’t an immigrant, woman or lesbian…she was just an incredibly gifted athlete, fighting another incredibly gifted athlete, for the highest prize in the sport.

We encourage our girls to partake in sports, we see these amazing Olympians and college phenoms who tie their hair back in a pony-tail and dominate their respective athletic fields. Just as sudden as their arrival, they disappear, with no other avenues to ply their craft and show the world just how ferocious a competitor a woman can be.

Now, in the UFC, girls can not only present themselves as dominant athletes and champions, but headline events that previously were reserved for the most dominant men in the world. A young girl can look to a Rousey, Joanna or Holm and see that when the cage door closes, their gender is irrelevant to their skill. The crowd will support them all the same.

For years growing up, “Hits like a girl” was considered the most brutal school-yard insult. This disparaging adage persists today as the grown-up versions of those taunting boys in the schoolyard continue this mentality.

However, if the warrior-women of the UFC continue to march their way into becoming household names, and continue to get support and backing from the UFC, perhaps these feminine fatales may just change “hits like a girl” from an insult to the highest compliment someone can get.