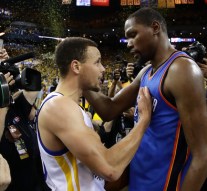 Kevin Durant has taken his talents to Oakland.

Sure, it doesn’t have the same ring as South Beach, but regardless the NBA has another “super team” on it’s hands as Durant has agreed to join the already stacked Golden State Warriors. Not surprisingly, these events have already led many to name the Dubs as the 2017 NBA champions before a minute of the season has been played.

Like it or not, Durant announced via The Players Tribune that he accepted a 2 year deal to play with the likes of the Splash Brothers (Klay Thompson & Steph Curry) and the nutcracker (Draymond Green). The team that won the title 2 short years ago, and made NBA history last season with a 73-9 regular season (losing in 7 games to Cleveland in the Finals) just inked the 7 time All-Star, 4 time scoring champ, and 2014 MVP.

Like any move of a player of Durant’s caliber, not everyone is on-board with the switch.

Some say that Durant is taking the “easy way” to get his ring; that the decision to link up with back-to-back league MVP Steph Curry, on a team that won 73 games a year ago without him, makes any title less meaningful. Sure, this Warriors team had a historic regular season, but they also made NBA history by blowing a 3-1 series lead against the LeBron led Cleveland Cavaliers, so nothing should ever be considered easy or less meaningful. A title is a title. Just ask any of the long list of superstars who have never won a ring.

Getting Durant unquestionably makes the Warriors even better and allows the Warriors to rest anyone on any given day or play with 4 All-NBA team players in the starting lineup, something never before seen in NBA history. However, next season Durant and the Warriors will be under the largest microscope potentially in North American sporting history. If the they do not bring home a championship next season Durant will face the most criticism and a tsunami of crying Jordan face memes, the likes of which none of us have ever seen.

Unlike LeBron on his move to Miami, Durant did not promise 1, 2, 3, 4 championships. He didn’t get a key to a city, and make a large televised event called “The Decision” to announce his move. Durant picked a great team that, with his talents, could win a championship as early as next season. Is that not what any person would do? Sure sports fans honor the players who do it the hard way, but the 27-year-old free agent saw a chance and he took it.

Some players never get the glory of a championship. Big names like Karl Malone, Steve Nash, Shawn Kemp, Chris Webber, Charles Barkley retired without any gold and diamonds on their ring fingers. Each of these stars which formed their own “super teams”, all of whom failed. Other players like LeBron, Gary Payton, Dwayne Wade, Hakeem Olajuwon, and Shaq failed in their inaugural seasons with their very own “super teams” but were able to get to the mountaintop either in future years with their team or somewhere else. However, not all super teams fail. Just ask the ’80s Lakers and Celtics, the ’07-08 Celtics, early ‘2000s Lakers, and of course those “Big 3” Miami Heat teams under LeBron. It is a tried and true strategy to put players in a better position to win. After all, that is all sports are really about. 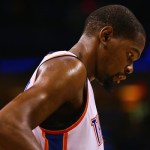 Kevin Durant did what many superstars have done in the NBA dating back to the 80s and hearing the level of criticism spewing from the talking heads on other websites has become out-of-control. Durant has become vilified and crucified as lazy and a sellout because he cares more about winning a championship than money. He could have gone to the Celtics for a max contract. Hell, the Clippers and Spurs were selling him on building a super team of his own so this shouldn’t come as a shock the way this has played out.

Simply put, the Warriors presented Durant with the best opportunity to lift the Larry O’Brien trophy, so he took it. He announced his departure from Oklahoma with his own article thanking OKC and their fans, explaining that Golden State was the best option available to him in his quest for that elusive first title. In a world where the masses sit on their couches complaining about how athletes are only concerned with money, the hypocrisy surrounding their comments on Durant’s decision is laughable. He made this decision to win and he should be respected for it.

Whether you agree or disagree with his decision, few can deny that right now Durant and the Warriors are the odds-on favorite to win their second title in three years. And the idea that Durant is any different then the large number of super stars forming “super teams” is a joke. “Super teams” have already been a thing for a long time so it’s time to stop acting like he is the biggest traitor in the history of the game.

Kevin Durant made a basketball choice. He did not rub anyone’s face in it; he did not leave for greed or for fame; and he did not flip off his former team in the process. So stop with the hatred people!

And start the year-long party in Oakland.

Last reply was 5 months ago