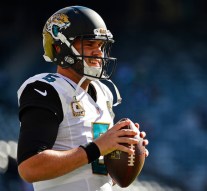 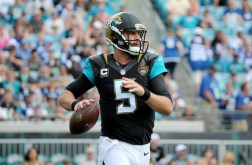 The above phrase was uttered at many a sports bar during the 2015 season, as Blake Bortles and company completed pass after pass against apathetic cover 2 defenses in garbage time. He put up great numbers with what looked like a truly competent offense. While there are plenty of reasons to believe this is for real, there is a legitimate chance that it was all fool’s gold, and the young offensive players aren’t actually THAT good. But that’s no fun!

I look at this team and see a Head Coach and GM that have slowly but surely put together a ton of talent on both sides of the ball. They have pieced together a team that is ready to pop into the playoff picture at any moment.

The past decade of GrowlyCats football has been dreadful: The Halcyon years of Brunell, Smith, Taylor and Coughlin are quite a while ago now. That era gave way to the “still pretty solid” Jack Del Rio years with Garrard and that great defense. However, once Gabbert torpedo’d Del Rio’s career and he was canned, this team got awful and has been since. As far as talent is concerned, this squad is full of young players at premium positions who could be stars, so let’s dive in and try not to get blinded by the light…

So how good was Bortles last year anyway? If you listen to any type of football podcast, whether it be framed in a fantasy lens or not, you’ll hear Bortles detractors say one of two things:

Since I have no life, I watched a pretty decent amount of 2015 Jags film in preparation to write this. Not exactly sure what the male equivalent of “crazy cat lady who watches Bridget Jones Diary on repeat” is, but I would imagine watching Jacksonville Jaguars game tape is way the hell up there. The notion that the Jags were always getting blown out is overstated, and as a matter of fact other than the Pats game they were within striking distance in most games last year entering the 4th quarter. Now as far as the Robinson thing…yea…. that’s pretty much exactly what the film says too. 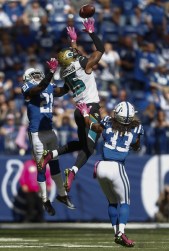 Allen Robinson is a STUDDDDDD man. Absolute vaccum cleaner out there with 4.4 speed, a 6’3 frame and a ridiculous catch radius. The kid caught everything last year, and with Allen Hurns complimenting him nicely on the opposite side, there is no reason to think that the Jags wont be an above average passing game again. 2014 2nd round pick Marquise Lee from USC has still yet to show that he’s a good slot guy, but he still has time, and the Allens on the outside will give him plenty of space to crawl through underneath and catch short routes.

The backfield isn’t that interesting IMO. You have former Alabama back TJ Yeldon, who was kinda “meh” last year, but then again so many tailbacks are when they aren’t behind a good line, and then you have free agent Chris Ivory. The latter was a great success story in New York, and was one of the best backs in football the first month and a half of last year. His physical running style can definitely come in handy when it’s time to get a cheap 4 yards on a draw play on third and two. I think these two men will split the carries pretty evenly, and in this day and age you don’t need much talent to get yardage on the ground if the passing game opens up the defense.

As far as the offensive line is concerned, it’s safe to say that 2013 1st round pick Luke Joeckel is a bust in the sense that he’ll never be a left tackle, but he is at least salvageable as a starter, and will probably be around the league for a while. This line had trouble protecting Borltes last year, but the signing of LT Kelvin Beachum from Pittsburgh will hopefully protect the blindside a little better in 2016. This can definitely be a top ten offense, or a bottom 5. Such a high variance crew to me.

HC Gus Bradley, let’s not forget, is widely considered to be the master architect of the “Legion of Boom” in Seattle in 2011 and 2012 before he came over to Jacksonville to become head coach. When you look at what Seattle is able to do on defense with all of the “multiple” pieces they have, you see that same sort of thing in Jacksonville. When NFL people talk about defenses needing to be multiple, they mean so in two different ways: 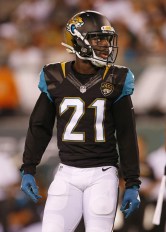 The Jags core of reliable veterans LB Paul Posluzny, DT Jared Odrick, and Dan Skuta give Bradley the ability to stay home on play action passes because they have shown an ability to defend the run without having to fill gaps. The key to this defense will be the maturation of 2015 1st round pick Dante Fowler (who redshirted last year after tearing up his knee in June) and 2016 1st round pick CB Jalen Ramsey from Florida State. These two players were by consensus seen as the top defensive players of their respective drafts and the Jaguars came away with both of them in consecutive years. That’s a massive haul.

Opposite Ramsey you have incoming Free Agent Prince Amukamara from the Giants, who never lived up to the first round billing in NYC but is still a solid starting corner in the NFL. Lastly the main course the Jags munched on when dining at the free agency buffet was superbowl hero Malik Jackson, who will saddle up next to Fowler as an interior force. Look for him to collapse the pocket on Andrew Luck when they play the Colts suspect O-Line.

I haven’t even mentioned Telvin Smith yet, who is the futuristic rangy type of LB that football nerds like myself cream over; kid can cover Gronk down the seam as well as he can get after the QB. Very much like the offense, this is a high variance group full of incredibly young talented players. No idea what’s going on here.

Variance, variance, variance. I can honestly see this team overtaking the Colts and going 11-5 but I can also see them sucking like they always do and going 5-11. There is just so much up in the air here. I will say this though: they are building the team with young drafted talent, and that’s the right way to do it. Overall, let’s split the baby and say 7-9. And yes, that’s my final answer.