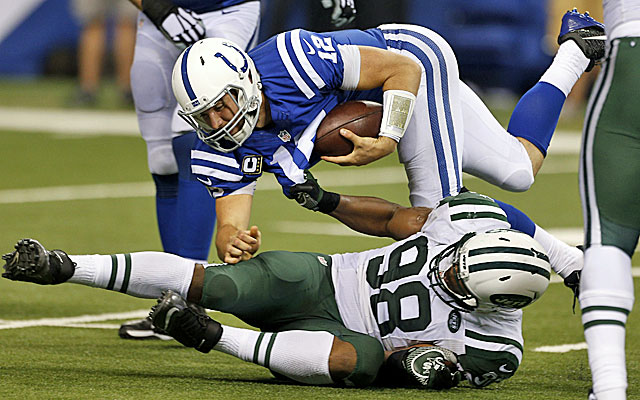 Watching Jets games has been the same for a few years. 1st down: run, 2nd down: run, 3rd down: desperate pass play because they got stuffed twice already. Former head coaches Eric Mangini and Rex Ryan both coached offenses that felt the same. This Jets team is more a F-22 instead of a C-130; a team that is up 10-0 in the 3rd quarter facing one of the best QB’s in the league and throws on first down, REPEATEDLY. Ground and Pound™ is officially dead. Now there is a gambler under center; the first non-project QB to play in green and white since Brett Favre and Chad Pennington. There is a reloaded defense, still tough in the trenches (tough enough to stop Frank Gore in a goal line stand), and ball-hawking mercenaries Derrell Revis and Antonio Cromartie have returned to Gang Green to provide opportunism to complement that toughness.

The Jets have been a franchise of commitment to the run game for the better part of a decade. Thomas Jones came, had a few thousand yard seasons, and went. LT came in to run. Shonn Green was given the ball to fall forward 2 and three yards at a time. Chris Ivory runs it with a bit more excitement, but let’s not kid ourselves, he is a yards after contact guy, and a power back; there will be a lot more runs between the tackles than outside them. Years come and go. A couple of coaches came and went. The Jets ran the football. Ryan Fitzpatrick and OC Chan Gailey are having absolutely none of that.

The ‘Gambler’ and his play caller have a revamped offense to go hand-in-hand with their new pass-first sensibility. The stats may not back it up over the course of the season, but right now the team seems to want to pass first and run into the space that the passing creates. This team threw more than they ran 34-27. A Jets team with a 55% pass play calling? I’m confused, hold me. Fitzpatrick isn’t looking for check-downs with the same regularity that Jets fans have seen in years past. He is looking for 30 yard passes on 3rd and 7; he isn’t always connecting, but hey, it’s a start.

The defense deserves a lot of the credit for this offensive-minded change as well. Their success to date has given Gaily and Fitzpatrick the confidence to take big risks. For two games the defensive front 7 has had the opposing QB running for his life, often by rushing just 4 or 5 instead of bringing the house. But even when big blitzes are called, New York clearly has the secondary to back it up, as the defense in total had generated 10 turnovers in the first two games, a franchise record. Five takeaways a game is an unsustainable number, but the Jets defense looks to be game-changers on a weekly basis.

But what feels different isn’t always actually different, and the Jets aren’t a super-bowl contender yet.   As many opportunities as the defense is creating, the offense isn’t capitalizing as often as it should; 7 points off of 5 turnovers isn’t great. Three personal foul penalties, including one that stifled a drive in the 2nd half, are a nasty holdover from the costly penalties of yester-year. Fitzpatrick and Gailey’s gambles are going to cost the team from time to time, especially when the turnover gods start to punish Jets. It may not have cost them a game in the first two weeks, but it will eventually. Against a Colts team that coughed the ball up 5 times and couldn’t put together good drives, the Jets offense managed an anemic 345 yards of total offense. That won’t win the AFC East when Ryan Tannehill is passing for 359 yards, Buffalo is scoring 30 points a game, and the Patriot juggernaut rolls on. The offense, while transformed, still isn’t elite.

The offense may still be a work in progress, but with the hapless Eagles up next the Jets have a chance to be one of the most surprising teams to go 3-0 in Week 3.

Reports of Frank Gore’s demise were premature. San Francisco let go of Gore in order to let Carlos Hyde have the time and carries he needs to flourish; that’s ok, but Gore’s still got it. There were a lot of good looking plays called back for holding penalties by an overmatched Indy o-line, but he still looked good.

Andre Johnson was a complete non-entity tonight. As much as Frank Gore doesn’t look like a 32 year old runner, Johnson looks exactly like a 34 year old wide receiver. The Monday Night Football broadcast team was looking for him all night, but Andrew Luck wasn’t. Johnson wasn’t open and didn’t help his team.

A fifth round pick for Brandon Marshall is laughable. Jets GM Mike Maccagnan should be investigated for theft. Brandon Marshall has been a man amongst boys for the past two weeks. His stripping of a CB last week isn’t getting the attention it deserves (it’s the play of the year so far for me). His physicality and nastiness is something the Jets haven’t had since Keyshawn Johnson. Adrian Amos, the player that the Bears got from the 5th round pick looks like the real deal too and I hope he does as well as he’s started to in Chicago. But the impact that Brandon Marshall has had on this team makes that trade a steal.

Final thought: I’m in love with the pylon cam, at least until the Patriots figure out some way to use it to their advantage.