Home / CFB / Sam Wicks / It All Comes Down To This: Two Teams Fight for College Football Glory in the National Championship

Thursday’s are an underrated day of the week. Perhaps the one day that gets more overlooked than any other. But it seems content with its perennial role as a supporting player, rarely earning a chance to be in the spotlight and almost always guaranteed to be seen as a final hurdle rather than a team player. September 3rd, 2015 was a Thursday. It began and ended as most Thursdays in 2015 did: a sunrise, a sunset. But this Thursday had a different feeling to it. It had anticipation, the promise of a fresh start, and an opportunity for glory. The College Football season was upon us. 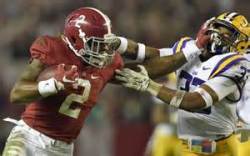 That was 128 teams ago. That was when Ohio State was the first team unanimously ranked #1 by the AP and was heralded as the possibly the greatest team of all-time. When we weren’t yet familiar with the names Christian McCaffrey and Baker Mayfield. When expectations were at their peak for programs like TCU and Auburn. When Alabama had too many question marks at quarterback and Clemson had too many potential holes to fill  in its defense. We are presented each fall with a new chance to see young men live out their dreams in front of us, to watch opportunity in a rare visual form. September 3rd wasn’t remarkable for its unprecedented upsets or its unexplained outcomes. September 3rd was remarkable because unlike almost any other day of the year, it was characterized and identified by its hope and optimism.

And then there were two. 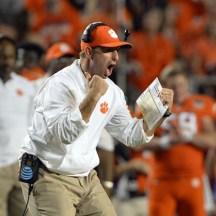 Can anything else be said? We’ve focused on and dissected these Clemson and Alabama since the regular season ended in early December, since the first rankings had both teams in the top four in November. We’ve had a Heisman trophy winner and a pizza party. The names Henry, Watson, Saban, and Swinney have been household for weeks. What more can be said about Alabama’s nation-leading defense, the freshman sensation in Calvin Ridley, or the growth of Jake Coker? How else can we discuss Clemson’s offensive efficiency, the commanding presence of Shaq Lawson, or the uncontainable dual threat that is Deshaun Watson?

Alabama has a chance to end the SEC’s title drought of an unusually lengthy two years. Clemson has a chance to be the first team to finish a season 15-0, the most wins ever in a single season. Alabama has a shot at redemption, Clemson at history. There are enough extras riding on this game to provide ample motivation. But this is what you play all season for, what you plan around, and where you dream of being in the last game of the season. Extra motivation doesn’t matter anymore. It’s the National Championship.

Now let’s see who goes out and takes it.