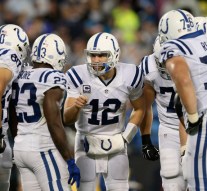 I fucking hate the Colts. 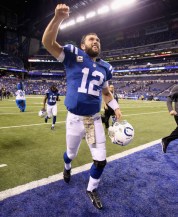 No, it’s not because they have a winning record against the Phins since I’ve been alive. Basically everyone does except for maybe the Bills and Browns. I hate the Indianapolis Colts because I cannot think of an organization or ownership group that is more profoundly undeserving of what’s about to be 30+ years straight of elite quarterback play. When you add the Peyton years to the Luck era, which should continue through the mid 2020’s, you see that this Drunken Cokehead buffoon Jimmy Irsay will probably oversee 350+ wins as owner, and consequently get inducted into Canton for his “contributions to the shield.” Yuck.

So that’s where we are with the Colts: Year 5 of the Andrew Luck reign. I’m fairly shocked that they actually managed to go 7-9 last year without him considering GM Ryan Grigson has done an awful job of putting this roster together. Earlier this month they just cut their 2013 1st round pick Bjorn Werner, and whenever you have to waive a high draft pick like that before he even plays out his rookie contract you know he was a flame-out.

Grigson has built this Colts team like an 11-year-old with ADHD would build a Madden Roster: complete disregard for the trenches and non-sexy position, with too large an emphasis on the skill positions, particularly players with speed. The whole point of having an Andrew Luck type throwing the rock is that your skill players can be journeymen and mid round picks, you don’t need superior talent to move the ball. Let’s take a look at this 2016 team, one that will likely make the playoffs, and decide just how far they’ll go…

Earlier I said that the Luck era will stretch into the mid 2020’s…that may not be the case if Luck gets hit as much going forward as he has since entering the league in 2012. One of my problems with this team is the lack of protection they’ve afforded their awkward bearded star. The left side of the line is solid with veteran Jack Mewhort and BC grad Anthony Constanzo, but other than that there are some turnstiles that may get #12 killed. Remember, JJ Watt plays in this division, good thing Luck has life insurance. 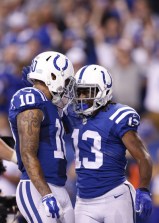 To be fair, they did draft Alabama center Ryan Kelly in the 1st this past April, so I guess I can see a world where 3 out of the 5 positions along the line are solid, and they’ll need them to be. On the outside, the Colts have an embarrassment of speed and downfield playmaking in the already proven TY Hilton, third year guy Donte Moncreif as well as 2015 1st rounder from the U, Phillip Dorsett. I think we’re all waiting for this offense to be the dominant downfield attack that they showed signs of being in 2014, but in order for that to happen, Andrew Luck needs time to throw. Frankly I thought the Dorsett pick was a little redundant (he’s just a worse version of Hilton, as far as skillsets go) but you can never have too many 4.3 burners.

Lastly, there is old reliable Frank Gore, who at this stage of his career just trudges through holes on his way to 4.1 yard gains and AARP checks. Believe it or not, he was the 9th ranked tailback in fantasy last year so at least he’s capable of keeping some pressure off the passing game. If Luck is healthy, they’ll be a top 8 offense for sure, maybe even top 5, but God Damnit they need to protect that herb. 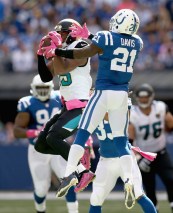 Here is where it gets dicey. If All-Pro corner Vontae Davis was slated to play all 16 games, I would feel less queasy about this unit, but the fact that he’s likely to miss the first month of the season gives me the creeps.

During the Peyton years, the Colts never really had a great defense, and as a matter of fact they won the Super Bowl in 2006 while giving up 130 yards/game on the ground. I mean sure, they had their guys who would make pro bowls once in a while (Bob Sanders, Gary Brackett among others) but their defensive bread was buttered with the pass rush. See guys, that’s the beauty of being a high powered offensive team; you put your pass rushers on the other side of the ball in obvious throwing situations because the other team is playing from behind. However Dwight Freeney is gone, and Rob Mathis is on his last legs now. I am not sure how much pressure this team will be able to generate on opposing QB’s.

There really isn’t much to get excited about here. The LB core is fine, I suppose. D’Quell Jackson, Trent Cole and Mathis are good players, but they’re all old and who knows how much they have left. They did draft Clemson DB TJ Green in the 2nd round this past year though, but they’re not sure if they want him at corner or safety. Across from Vontae, they have former Patriots flag-drawer Darius Butler manning the other side of the field who should not be a starting corner in the NFL. There is a very real possibility this unit finishes in the bottom 5 in all categories.

As you were reading this, all 5 of you, I’m sure you got the impression that Andy is down on this team, and doesn’t think they’re gonna do much. Au Contraire! As the French would say (I’m cultured, try to keep up). I actually think that the Colts will go 11-5 and win this wretched division just because their QB is so much better than the other ones surrounding him.

MAJOR CAVEAT: Mariota (2015) and Bortles (2014) are two up and coming quarterbacks who could take a serious step forward this year. The whole “we only win the division because we have Andrew Luck” act may start to get really old if the Titans and Jags move in the right direction like we think they might. Grab the popcorn, the AFC South could actually be interesting.