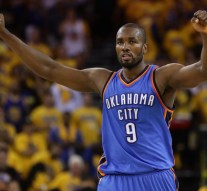 The lead-up to the 2016 NBA draft featured an atypical amount of trade talk. Most of it revolved around whether or not teams would maneuver to move up or down in the draft, with the occasional Jimmy Butler trade machine speculation tossed in on the side.

It turns out there was trade act9ion on draft day, just from a very unlikely source. The biggest move of the night by far was made by Western Conference Finalist Oklahoma City. After a crushing playoff collapse against Golden State, General Manager Sam Presti blew up the Thunder’s big three by trading Serge Ibaka to Orlando.

Presti has come in for a lot of deserved grief the last few seasons. Oklahoma City was in better position for the long haul than any team in the NBA when they were squashed by LeBron’s Heat in 2012. They had three of the NBA’s ten best players in Kevin Durant, Russell Westbrook, and James Harden and one of its elite rim protecting Bigs just beginning to show flashes of three-point range on the other side of the floor in Ibaka. Durant and Westbrook were 23 years old. Harden and Ibaka were 22. The Harden trade is still a big net loss for OKC, but the emergence of Steven Adams (one of the players OKC drafted with the picks they received from Houston) last season has just now made it somewhat more palatable.

The bad taste that the Harden trade left in hindsight has left a air of dread in Presti’s draft night gamble. If basketball has produced anything more analogous to the New York Yankees’ famous “Core Four” than Durant, Westbrook, Harden, and Ibaka, it doesn’t immediately come to mind. Yet, after receiving so much criticism for punting on that foursome after one failed foray into the Finals, is the solution to another big postseason disappointment to take them apart further?

That reaction is understandable given OKC’s recent front office history, but when this trade gets put under a microscope, it makes a lot of sense for Oklahoma City. Ibaka was supposed to have his coming out party the last two seasons, but he regressed badly in 2015-16. Presti couldn’t be blamed for concluding that Ibaka is a very good defensive player who is not going to be quite as good as anyone might have hoped when observing the best moments of his young career. The emergence of Steven Adams has also cluttered Oklahoma City’s frontcourt with Durant logging minutes at the 4** and Enes Kanter already on a max contract. Adams looks like another gigantic monster that will only add to the Thunder’s already unparalleled combination of athleticism, size and length. 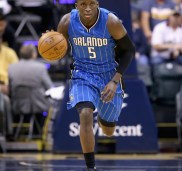 As for what Oklahoma City received in the deal, Oladipo is going to be the best 2 guard Oklahoma City has had post-Harden trade. He is a smart fit for what the Thunder do. He consistently works hard, particularly on the defensive end, and he has enough offensive acumen to chip in when needed, an area he won’t need to assist too often given the overbearingly ball-dominant Durant-Westbrook pairing. Meanwhile, Ilyasova gives Oklahoma City another shooter off the bench who can give second-units valuable floor-spacing. Sabonis is an unknown, but with Durant, Adams, and Kanter in front of him in OKC’s big rotation, he’ll have a lengthy learning curve to figure things out.

As easy as it is to see how this trade will help the Thunder, it’s just as hard to see how this trade really helps the Magic. Serge Ibaka is a good-to-very good NBA player, but Orlando really doesn’t need a Power Forward as they already have their 4 of the future in Aaron Gordon. New Head Coach Frank Vogel brought small ball to the Pacers last season, so it is possible that the idea is to start Gordon and Ibaka as a big pairing.

Vogel has always been a very good defensive coach and playing a lineup that features Elfrid Payton, Aaron Gordon, and Serge Ibaka may well provide a strong enough defense to get Orlando into the Playoffs. But trading all of those assets for one guy is a win-now trade, especially given Ibaka’s expiring contract. Win-now trades that don’t put a team anywhere near the contender conversation have never made sense to me and has not had a great track record of working out.

**This post was written under the well-reasoned but dubious assumption that Durant will remain in OKC for the 2016-17 season.