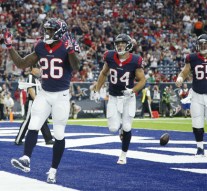 Just really quick before we get started here…can we please pour out some liquor for the 2008-2012 Kubiak/Schaub Texans teams that were a lot better than people think. Most importantly, that duo gave this embryonic franchise the only taste of winning and relevance they’ve ever had.

Since coming into the league in 2002, this Texans’ fan base hasn’t had much to get excited about. Those Kubiak/Schaub teams however at the very least made the playoffs (occasionally) and scored tons of points. One of the most impressive things a coach has done in recent memory was what Kubiak’s offense did in 2009 and 2010, which was boast the leading passer in the NFL one year (Schaub, 4,770 yards) and then the VERY NEXT YEAR, have the leading rusher in the NFL as well (Foster, 1,616 yards). Think for a second how hard that is to do. How many offensive minds can completely pivot their identity like that and excel in doing from season to season.

Some will blame their expansionary/fledgling nature, some will blame the fact that they’re the 2nd banana to the Cowboys in the state of Texas, and many blame the vice grip that Peyton had on the AFC South for the longest time…whatever the case may be, the Texans have not found continuous success since their inception.

Enter from stage right, new QB Brock Osweiler. Paying the kind of money they did for Osweiler took gigantic balls. Let’s see if it’ll work out.

Eventually, every head coach ties his job security to a quarterback that he takes a leap of faith on. When Ron Rivera took Cam, it worked. When Rex traded up to get ‘The Sanchize’, it didn’t. Either way, HC’s in the NFL are able to feed their families and send their hot daughters to fancy private schools based on the merits of the quarterbacks they jump into bed with. 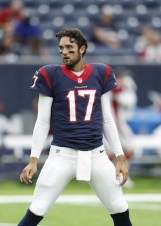 Bill O’Brien, by all accounts, is one of the brighter young offensive minds in the NFL. I’m not gonna cite the fact that he was Brady’s OC in New England, because Brady basically calls the plays, and has for years. Plus, many of Tom’s former OC’s flamed out horribly elsewhere (Charlie Weiss, Josh McDaniels, et cetera).

Even at Penn State though, in the immediate wake of scandals and sanctions that stripped the program of any sort of talent, O’ Brian managed to score points. People forget he was the first PSU coach post-Paterno; no easy job. His leap of quarterbacking faith is on the 6’8 Brock Osweiler, who looks more like a douchey water polo player from a Teen Nick show than he does NFL quarterback. We should all be willing to keep an open mind, but an inconvenient truth for Houston is that Osweiler actually posted a lower total QBR than the since deposed Brian Hoyer did last year. Not to mention, he did so throwing to better targets in Demarius Thomas and Emmanuel Sanders up in the thin air of Denver. Hoyer believe it or not was statistically a league average passer in 2015, so I struggle to see this as a major upgrade.

Having said all that, Hoyer is a retread who’s thrown picks in a half-dozen different area codes, whereas Brock still has the intrigue and supposed upside of a guy who has thrown only 305 passes in his career while warming Peyton’s bench. The best case you can make for the green and unproven Osweiler is that his number one WR and starting tailback are both fantastic ballplayers. DeAndre Hopkins is a bad boy, and is easily a top 10 WR in the league. Lamar Miller is really good, and people don’t even know it yet due to under-utilization. Sure he’s had a couple decent years in Miami, but Philbin never gave him the ball enough…like ever. 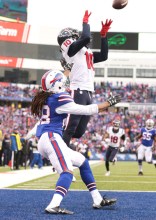 We know about Miller and Hopkins; the key here will be the young WR’s that are behind Nuk on the depth chart. Jalen Strong (3rd round, ASU 2015) had a disappointing rookie year, but year two is when many WR’s make the leap, so who knows. The more intriguing kid to me is Rookie 1st rounder Will Fuller outta Notre Dame. As a BC Football fan, I am very much aware of what Fuller is capable of; to call him a deep threat simply because of his speed doesn’t do justice to his toughness and ball skills while operating underneath. He’s drawing some serious Steve Smith comps, and that’s not undue praise. All in all, I like the top-end talent here, Lamar and Nuk are as good as it gets, and the young WR’s intrigue me, but at the end of the day I just don’t trust Brock. He was underwhelming in Denver last year despite being in a very easy and talent-laden situation to thrive in. I just don’t think he’s a franchise QB.

PSA: If you expected this section to be a JJ Watt suck-off, then minimize your browser before your boss walks by, and go on with your day. You’ve heard it all: Watt is the best defensive player I have ever seen, and that includes peak Ray Lewis. He is so good that if he retired tomorrow he would make the HOF. This defense finished 4th in DVOA last year, and there’s more to talk about than him. 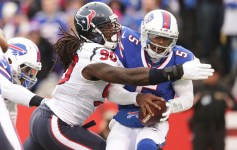 Other than Watt, this defense doesn’t really have any grade A players, but they have a whole bunch of B/B+ guys, and a great mix of veteran talent and young high ceiling guys. The rock-solid veterans include: epic meathead Brian Cushing, the always underrated CB Jonathan Joseph, and of course, everyone’s favorite fatty Vince Wilfork. They key to the Texans defense won’t be them though, it will be the young, highly drafted players that Houston’s taken in recent years. JD Clowney is obviously the headliner. I think 10 years from now it’s very possible we look back on that hit he had on that Michigan tailback and say to ourselves “wow that kid was the first overall pick based on ONE play that went viral and nothing else”. Having said that, a pass rusher with Clowney’s talent cannot be given up on. He will be here once again looking to complement the automatic 16+ sacks Watt will deliver on the other side.

Clowney isn’t the only Texan draft pick to disappoint though, Corner Kevin Johnson out of Wake Forest and LB Benardrick McKinney out of Miss St were the 1st and 2nd rounders respectively in 2015, and Houston is looking for tons more from them. If Clowney, McKinney and Johnson take that next step, this could be a top 8 unit once again…if they don’t, Cushing and crew are only one year older, and I can see them being as bad as 19 or 20.

I’m not liking what I’m seeing here. I don’t like Brock, I’m not sold on the head coach, and I am weary of the young defenders that haven’t shown much. Eventually Cushing, Joseph, Wilfork and company will age, and I am not confident in Clowney and McKinney to fill the roles. On top of that, it bears mentioning the Andrew Luck injury threw this team a huge bone in 2015, but Luck will be healthy this year and I don’t see Houston squeaking by.