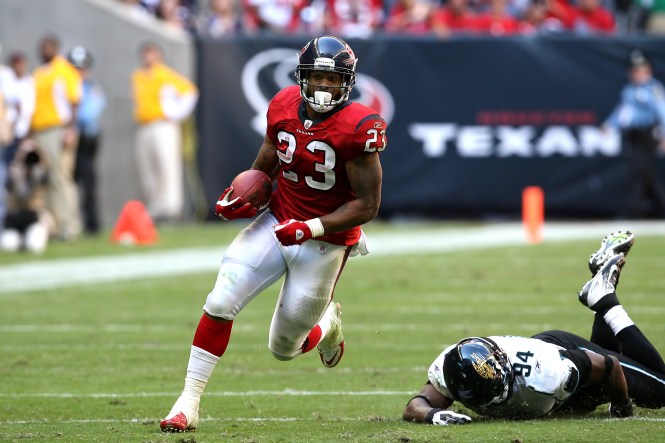 Sure it may be Week 6, but that’s the special thing about one-week fantasy leagues… it doesn’t matter. So before DraftKings (and FanDuel for that matter) is finally called gambling and gets shut down, here are some players to be targeting this week in daily leagues using DraftKings’ pricing. And to make things more interesting be sure to check back each week as we at HBT Sports will be keeping track of how we do. At least that way you will have some perspective about the accuracy of our writers. Enjoy.

Arian Foster- Yes, I know he hasn’t quite looked like himself since coming back from his injury, but I’m banking on him to turn it around this week against Jacksonville because… well… Jacksonville… yea…

Jeremy Maclin- He has been lighting it up recently averaging over 120 yards per game over his last three contests. Jamaal Charles is out for the year so I expect Alex Smith to throw his way early and often. A good price at $6,500.

Donte Moncrief- Pats vs Colts. We all know its going to either be a shootout, or a Patriots spanking. Either way Indy is going to be throwing the ball a lot. With Luck expected to play I expect Moncrief to be targeted over Andre Johnson as has been the norm with Luck under center. $5,000 for him is a steal.

Delanie Walker- Mariota likes throwing his way. The man gets targeted second most on the team behind Kendell Wright (who I also like this week) and for about $1,00 less then a lot of the top flight Tight Ends i think he is a great value this week.

Blake Bortles- He has gotten at least 16 in his last 3 games, so I’m riding his hot streak this week.

Gary Barnidge- In the last 3 weeks he’s had a TD and had more than 6 targets. McCown obviously likes the veteran tight end and trusts him in the red zone. I expect his production to continue.

Carlos Hyde- He had his first productive week since Week 1 against a tough defense. This week he plays a poor Ravens D, I expect him to exploit them as well.

Larry Fitzgerald- I met him once. I feel obligated to pick him every other week, if not more frequently. And he’s doing great stuff. And the Steelers defense isn’t.

Allen Hurns- Three straight games with a touchdown. Back to back games over one hundred yards. Good bargain at $5,000.

Dion Lewis- The Pats will probably be fired up for the game against the Colts (as every sportscaster has made mention of this week). He has put up great numbers and this should continue.

Panthers- The Seahawks don’t actually have a great offense and they just had a bye week for some rest. Why not?