It’s the middle of November, and that means that we have reached the time where games begin to split between those that could not matter more and other games that could not matter any less. This little weekly post of ours will be narrowing its focus accordingly for the remainder of the season. Your team has seven games left (unless you root for the Giants, Browns, Steelers or Saints. Then you have six games left. Sucks for you.). Let’s take stock of the NFC Playoff picture heading into the home stretch. 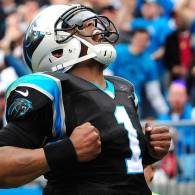 Carolina Panthers – The Panthers have relied on a very strong defense, led by Defensive Player of the Year candidates Josh Norman and Luke Kuechly, but their offense has been the story of their season. Cam Newton was good one season ago, but often not good enough to overcome the glaring weaknesses of the offense around him. Carolina had a bad offensive line, an old and deteriorating set of running backs, Greg Olsen, Kelvin Benjamin, and then a group of receivers who are questionable NFL players. This year, the offensive line is still bad, the running backs are one year older, Kelvin Benjamin hasn’t played a snap, and it hasn’t made a damn bit of difference. Cam Newton has been so good this year that Carolina’s offense ranks 10th in offensive DVOA after 10 weeks. Old-timey intangibles people, if you’re looking for something to throw around in an argument with a stathead: Cam Newton is a top 3 MVP candidate right now and he ranks 21st in QBR, according to ESPN.com. That’s a joke. Newton and the Panthers have dabbed their way to a 9-0 start, already earning themselves a postseason bye week barring a completely unforeseeable collapse. What a delightful team they’ve been this year.

Arizona Cardinals – The Panthers are 9-0, but the 7-2 Cardinals have been the NFC’s best team through 10 weeks. Their offense has made a habit of putting up big scoring totals week after week, no matter what. They needed another big week on Sunday from veteran QB Carson Palmer to notch a signature win in Seattle, and he came through again (29/48, 363 yards, 3 TDs). At their best, the Cardinals have looked as good, possibly better than every other team in the NFL. If there’s a reason to be skeptical about them moving forward, it’s that they’ve still managed to drop two games against the NFL’s 3rd-easiest schedule of the first 10 weeks, according to Football Outsiders, and that the schedule for the rest of the season toughens up with games against Cincinnati, Minnesota, Green Bay, and Seattle remaining. But, Arizona’s win on Sunday increased their lead in the NFC West to a commanding three games. Even though they currently sit just one game above the Packers in the NFC’s second wild card spot, Cardinals fans can get on the waiting list for playoff tickets worry-free.

And with that, we are out of the Lock section. This conference is much more exciting than the other one!

Minnesota Vikings – Few if any expected the Vikings to lead the NFC North after 10 weeks, but the Vikings have jumped out to an impressive and surprising 7-2 record. With more convincing performances, they could have easily gotten into the “Lock” grouping, but that 7-2 record is deceiving. The case for their playoff chances is that they’re 7-2. The case against their playoff chances is that regression is about to slap them in the face. Minnesota rank just 19th in overall team efficiency and their 7 wins have outperformed their expected win total of 5 by a full 2.0, according to Football Outsiders. That is a massive over-achievement in a 9-game sample and it’s been fueled by a very friendly first-half schedule. The Vikings answered the bell against the AFC’s pleasant surprise in Oakland Sunday, but even after that game, their schedule difficulty through 10 weeks ranks 31st in the NFL. Their schedule for their remaining seven games ranks 1st with games against Atlanta, Seattle, Arizona, New York (Giants), and both matchups with Green Bay still to come. The Vikings’ five-game win streak to take first away from the Packers has been a fun ride. It may be over very shortly.

Green Bay Packers – “R-E-L-A-X, relax” is not something the Packers can afford to do this season. After jumping out of the gate to a convincing 6-0 start, the Packers have dropped three in a row including an embarrassing loss on Sunday to the hapless Detroit Lions. The offense started well enough this year that the Packers somehow still rank 5th in offensive DVOA even after their horrendous last three games which have provided next to nothing apart from some garbage time stat-padding in a blowout loss to Carolina. Aaron Rodgers is the consensus best Quarterback in the World at the moment, and for the last two or three seasons, a narrative has emerged among fans and analysts that no matter what else happens to the Packers’ offense, they’re fine as long as Rodgers is under center. A below-average offensive line and depleted receiving corps have exposed that narrative as misleading at least, downright false at most. All the same, Green Bay remains a heavy favorite for a playoff spot thanks to a friendly remaining schedule and the benefit of the doubt. One has to presume that their offense cannot possibly continue their poor form of the last three weeks. 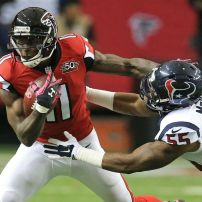 Atlanta Falcons – On the subject of offenses that have fallen off a cliff, the Atlanta Falcons have gone from looking like division favorites in a division that features the Panthers to a team that figures to be on the outside looking in come the postseason. Despite boasting arguably the League’s best Running Back and Wide Receiver of this season, the Falcons rank just 16th in offensive DVOA through 10 weeks. After scoring a mammoth 162 points in their first five games (5-0 record), the Falcons have managed just 67 points in their last four (1-3 record) against a real ‘murderer’s row’ of defenses: New Orleans, Tennessee, Tampa Bay, and San Francisco. Atlanta’s defense is a below average bunch (22nd in defensive DVOA) and their personnel do not suggest an imminent improvement. Their playoff chances hinge on their offense getting back to their early-season form.

Seattle Seahawks – The Seahawks rank 5th in overall team efficiency and no team has a bigger gap between their win total and their expected win total (4 wins vs. 6.4 expected wins, according to Football Outsiders). That misfortune combined with the League’s 25th most difficult schedule of the last seven weeks would indicate that this team may be about to regress very positively. The NFC West title may be out of their reach with the Cardinals playing as well as they are, but if ever there was a team to bet on overcoming a bad start and closing a two-game Wild Card gap, this Seahawks team might be it. Seattle’s defense has not been the dominating force we’ve come to expect and they have the worst offensive line in the League bar none, but even after a shocking 4-5 start, it would be foolish to discount Seattle with so much schedule left.

In the Hunt, NFC East Edition: Because Someone Has to Win, I Guess 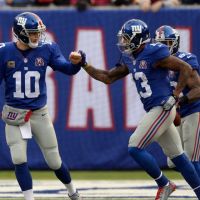 New York Giants – The Giants have been blissfully average, starting 5-5 and ranking 17th in both offensive and defensive DVOA through 10 weeks. Fortunately for them, “blissfully average” makes them the class of the NFC East. The Giants divisional lead fell to a ½ game after coming within a Landon Collins dropped Interception of winning the damn thing against the Patriots on Sunday. The Giants hold the tiebreaker over Washington, but will need to win their remaining matchup with Philadelphia to regain the tiebreaker with their other divisional threat. New York should still win the East based on their experience and their superiority at Quarterback, but they have had chances to strengthen their divisional lead and missed them – the Giants have played the 26th most difficult schedule of the first 10 weeks and will be playing the 7th most difficult schedule over the rest of the season, according to Football Outsiders. They still have games remaining against both Philadelphia and Washington and winning those games helps their cause while harming that of their rivals. They will likely decide the division.

Washington Redskins and Philadelphia Eagles – “What are these teams doing here?” The answer is that I have no idea what these teams are doing here, but somehow they both find themselves ½ game out of first place with a game in hand. Philadelphia’s defense is the best thing about any team in the NFC East (2nd in defensive DVOA), but they have serious problems on the other side of the ball, where Sam Bradford continues to baffle and make fans question what exactly it was about him that Chip Kelly just had to give up assets to acquire. With a win against Tampa Bay, Philadelphia moves into first place thanks to their tiebreaker over the Giants, but their schedule after Thanksgiving is very tough, when they’ll have to play the Patriots, Bills, Cardinals, Redskins and Giants in their last five games. Getting attainable wins against Tampa Bay and Detroit between now and then is critical to their chances.

As for Washington, their second-half rally against Tampa Bay may just prove to be the thing that saved their season. They’ve had two strong offensive performances in the last three weeks to catapult their DVOA ranking to 15th through 10 weeks, and their defense is still not good, but it’s made the important jump from miserable to below-average (21st in defense DVOA). After this Sunday’s matchup with Carolina, the Redskins will largely control their own destiny with 4 of their last 6 games against NFC East opponents and their other games against two of their easier non-divisional opponents (Chicago, Buffalo).

It is a travesty that Playoff football is actually a realistic possibility for either of these teams, but Tony Romo’s broken clavicle ruined the season for this division’s only good team. This isn’t the 2010 NFC West, where the Charlie Whitehurst-led, 7-9 Seahawks won the division to qualify for the playoffs, but it’s not far off. Dream big, NFC East teams. 8-8 may just do the trick this year.

St. Louis Rams – I actually feel bad about this one. I’ve joked numerous times about the Rams going 7-9 being as safe a bet as death and taxes, but they have looked like a frisky team several times this year. At 4-5, having beaten the Cardinals AND the Seahawks, some might see ruling them out as a hair-trigger move. But, their remaining schedule is very tough, they don’t have an offensive line, and they don’t have a Quarterback. Even Todd Gurley cannot rescue an offense that is Quarterbacked by Case Keenum. St. Louis may yet go better than 7-9, but they’re not making the playoffs.