It’s the middle of November, and that means that we have reached the time where games begin to split between those that could not matter more and other games that could not matter any less. This little weekly post of ours will be narrowing its focus accordingly for the remainder of the season. Your team has seven games left (unless you root for the Giants, Browns, Steelers or Saints. Then you have six games left. Sucks for you.). Let’s take stock of the AFC’s Playoff picture heading into the home stretch. 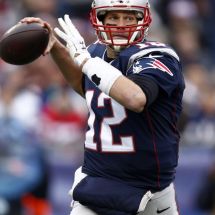 New England Patriots – The Patriots conquered their recent nemesis on Sunday thanks to Landon Collins’ butterfingers and the ambiguity of the NFL’s rule on what constitutes a catch. Odell Beckham Jr.’s non-touchdown was not as egregious as, say, the Calvin Johnson call or even the Dez Bryant call in last year’s NFC Playoffs. But it was another ugly reminder that no one, not the players, the coaches, the referees, or the League itself, knows what a catch is. It’s a rule that needs to be addressed to make it as specific as possible. HBT’s recommendation – Possession of the ball + two feet down = Catch. That’s it. The Pats are the AFC’s lone remaining undefeated team and look certain for home-field advantage throughout January. They’ll hope to have reliable Wide Receiver Julian Edelman back by then for a deep run.

Cincinnati Bengals – The Bengals have looked every bit a Super Bowl contender for most of this season, but concerns over Quarterback Andy Dalton’s viability in big games refuse to go away because of performances like last night’s against the woeful Texans. Dalton was a legitimate MVP candidate through six games, but two poor performances in the last three weeks cast doubt on the Bengals’ playoff prospects. A first round bye is very attainable for them after their 8-1 start, but for the Bengals to get over the hump and actually win a damn playoff game, the ‘Red Rifle’ needs to get over it first.

Denver Broncos – The Broncos hold a decisive 3-game lead in the AFC West, but their fans have rightfully begun to sweat about their prospects once the playoffs begin. A strong performance this Sunday from backup Brock Osweiler would go a long way to alleviate their fears. Osweiler has been studying at Peyton Manning’s knee for two and a half seasons to prepare himself for the eventual expiration of Manning’s shelf life, and that moment has arrived. Watching Manning on Sunday was cringe-worthy, inspiring a sentence that’s every bit as depressing to read as it is to write – Brock Osweiler should start over Peyton Manning because he couldn’t possibly be worse.

In the Hunt, Wildcard Edition

Pittsburgh Steelers – The Steelers’ offense has lived up to high expectations, but the defense has been the real story of their season. Their current standing of 12th in defensive DVOA makes them one of the more surprising units of the season. It kept them in games and let them ride out the Ben Roethlisberger injury that jeopardized their season. The Steelers would be prohibitive favorites for one of the AFC’s wild card spots if not for a tough schedule, with games against the Seahawks, Bengals, and Broncos in their last six. Even so, they find themselves in pole position with a 6-4 record. 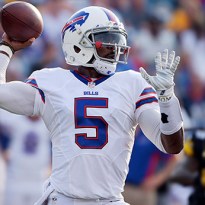 Buffalo Bills – The Bills saved their season on Thursday night in the Color Blind Bowl by gaining a full game in the Wild Card race on the Jets. Buffalo’s offense has been a pleasant surprise thanks to big plays from Tyrod Taylor, Sammy Watkins, LeSean McCoy and Karlos Williams. If Rex Ryan can get his defense playing up to their talent and potential, the Bills could well find a way to sneak into the playoffs. The Bills’ remaining schedule is pretty friendly with three games against the NFC East to go, but circle January 3rd on your calendars now. The Bills-Jets rematch comes in Week 17.

New York Jets – The Jets had a great chance to put some distance between themselves and the rest of the wildcard pack and they couldn’t come through thanks to a noticeable shortage of FitzMagic. Ryan Fitzpatrick had his worst game of the season and he will need to be better for the Jets to put a run together. The Jets will control their own destiny, though, thanks to a schedule that includes games against their direct competition – the Dolphins and the Bills.

Miami Dolphins – The Dolphins got back on track against the Eagles on Sunday after the Dan Campbell fairy dust wore off against the Patriots and Bills. The best argument for their playoff prospects is probably their schedule. Miami only has one remaining game against a team with a winning record (Week 17 vs. New England), and they have looked like the annoying contender that everyone thought they might be before the season started. Miami’s offense is going to have to score in bunches to get Miami into the last wildcard spot. The defense is just bad (27th in defensive DVOA), and that weak schedule still features plenty of teams that are capable of big scoring totals.

Kansas City Chiefs – The Chiefs have run off three convincing wins in a row to resurrect their season after being the most disappointing team of the early season. The Chiefs’ 4-5 record belies their form this season. They rank 11th in the NFL in overall team efficiency. Their remaining schedule is very friendly, with both divisional games against Oakland figuring to be their two most difficult. Their case for a playoff run is that it’s hard to find obvious holes on their roster. There’s nothing that they’re great at, but the numbers suggest that they’re pretty good at everything. They enter the home stretch one game back of the Bills for the second Wild Card spot. The two teams square off on November 29th.

Oakland Raiders – The Raiders have been one of the most fun, most pleasant surprises of the NFL season. After spending more than a decade as the NFL’s punchline franchise, Oakland’s offense arrived in style on the arm of Derek Carr. Carr has, in every respect, been one of the League’s elite Quarterbacks this season. Coupled with an average defense, that offense put Oakland right in the middle of the playoff conversation. Unfortunately, the playoff dream might be dead. The Raiders are just one game out of the second Wild Card spot, but their remaining schedule is very tough with the Packers, Broncos, and two games against Kansas City left to go. The Raiders were convincingly beaten by an overachieving Vikings team at home in a game they had to win. Oakland is still alive, but their playoff chances look longer than anyone else in this category.

In the Hunt, AFC South Edition: Because Someone Has to Win I Guess 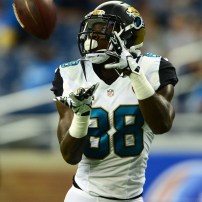 Indianapolis Colts – Few teams are worth paying more attention to next week. The Colts will be coming off their bye in first place thanks to their tiebreaker over the Texans, and the previous week’s win against the Broncos was the first time all year that Andrew Luck looked like Andrew Luck. Simply put, if Andrew Luck gets back to the form we’ve come to expect from him, this division is over. Tie it up and put a bow on it. If not, this is a completely underwhelming team that could easily find a way to let one of this division’s other teams stumble into the playoffs ass-backwards.

Houston Texans AND Jacksonville Jaguars – These are two bad teams with the occasional nice player. Both of their playoff chances come down to the continuation of horrible play from the Colts and Andrew Luck. If that happens, then one of these teams just might win the division despite themselves. If not, stick a form in them.

My only regret is that there is not one decent team in the AFC South that could make this list longer: