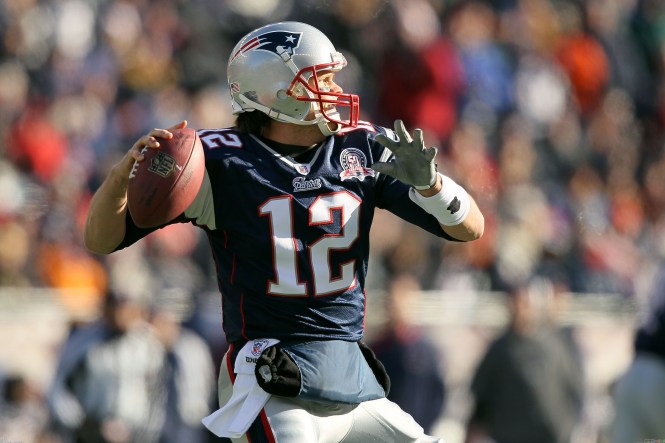 I don’t know what I’m doing.

Matthew Berry makes this stuff look so easy: he just writes an irrelevant essay about his kids, throws in some stuff about how this is going to be Lamar Miller’s year, and calls it a day. I’m not that cocky.
I have obsessed over this fantasy season for months, and the only thing I’ve learned is just how fickle this game is. Saying fantasy is a crapshoot is like saying that JJ Watt is a little overexposed: it’s the understatement of the millennium.

I looked at a CBS Sports 2014 mock draft recently, and I shuddered at what I saw. The Top 15 picks featured a superstar tight end coming off a record year, a young Broncos running back who had recently come into his own, and a second year Bengals running back coming off a monster season. All three of them—Jimmy Graham, Montee Ball, and Giovani Bernard—ended up underwhelming in 2014, and only Graham had any fantasy relevance throughout the season.

This season, according to Fantasypros.com ADP, the top 15 picks this year include a superstar tight end coming off a record year (Rob Gronkowski), a young Broncos running back who has recently come into his own (C.J. Anderson), and a second year Bengals running back coming off a monster season (Jeremy Hill).  Hmm. Methinks I smell a pattern.

Now, I’m not saying that Hill, Anderson, or my man Gronk are going to be busts this year. In fact, I’m saying the exact opposite. Fantasy football is so uncertain that no pattern will repeat itself 100-percent of the time.

In a game that provides so many headaches when looked at on a macro scale there is some solace to be found in playing favorable matchups on a weekly basis. Miller and Hill, for instance, could both end up being busts this year, but I can confidently say they’ll fair well against the pop-warner-esque defenses of Washington and Oakland.

So that’s where I come in: even though I have no clue what I’m doing or what will happen, I’ll be here all season giving weekly advice on whose matchups afford them the most security and the best chance to win.

Sure, this has been done in a million other columns, be they Start/Sit, Love/Hate, Pride/Prejudice, Sharks/Jets, so I won’t be able to offer anything revolutionary. However, sometimes it only takes one right call to win in a given week. Maybe you’ll find it here.

Now on to the picks…
QB
Sure Bets: Return of the Brady/Rise of the Planet of the Tannehill

Tom Brady: Despite his chiseled jaw, Brazilian supermodel wife, and multimillion-dollar UGG boot contract, there is a perpetual underdog buried in Tom Brady, and controversy is that dog’s Kibbles ‘n Bits. With the storm that’s been brewing this offseason, I pity the Steelers defense that goes up against a vengeful Brady on Thursday. On top of that, Brady has averaged 320 yards and 4.25 TDs in the two teams’ last four meetings; and, QBs in Week 1 Thursday night matchups have totaled for 15 TDs in the last four years; and, the Steelers have a secondary that could make a high school QB look good. This week, it’s the Return of Brady. Beware

Ryan Tannehill: What’s the best way to follow-up a $96 million dollar contract and a near-perfect preseason? By facing a Redskins defense that allowed opposing quarterbacks almost 20 points per game last season, of course. Here’s a bold prediction: Tannehill will outscore every quarterback except Brady and Rodgers this week. Let the Season of Tannehill begin.

Sam Bradford & Matt Ryan: Tannehill isn’t the only quarterback poised for a breakout season. Sam Bradford finds himself in Chip Kelly’s high-powered offense, and Matt Ryan has the pass-heavy attack of new OC Kyle Shanahan. Both get to start off the season against ideal opponents: each other. The Falcons allowed opposing QBs 18.2 fantasy PPG last season, and the Eagles allowed 16 fantasy PPG last season. Of the two, Bradford will likely have the better night (and maybe the better season), since the Falcons’ defense is weaker, and the Falcons line protecting Ryan has more holes than the theoretical love-child of Spongebob Squarepants and a block of swiss cheese. Ryan, however, is always a solid fantasy QB, and he can be expected to be a powerful Week 1 starter in what could be a shootout on his home turf.

Cam Newton: Alright, I’ll pull out my torch and pitchfork and join the Anti-Cam Mob. Newton is coming off the worst season of his career, just lost Kelvin Benjamin, and is playing on the road. All of that is obvious. What is less obvious is that, though Jacksonville is a steaming pile of garbage, they weren’t terrible against the pass last season: opposing quarterbacks averaged 14.2 fantasy PPG against them, and they ranked 12th in TDs allowed. Joe Flacco, Matt Stafford, Teddy Bridgewater, and Colin Kaepernick are all poised to outscore Cam this week.

Antonio Brown: As if anyone who drafted Brown in the first round was planning on not starting him, let me remind you that he is playing in a Steelers offense that is missing Martavis Bryant and Le’Veon Bell and is a WR1 in an inevitable shootout between Ben Roethlisberger and Tom Brady. Anyone who believes Brown won’t be the number one fantasy scorer this week is dumber than… well, dumber than Ben Roethlisberger.

Randall Cobb: Here’s bold prediction number two for the week: Cobb will be a top-five receiver this week. Opposing receivers lit up the Bears last season: the team ranked in the bottom three in yards and TDs per game, and in the bottom ten in fantasy points allowed against receivers. What’s more, Cobb and Jordy Nelson combined for 73 total fantasy points in the two thrashings the Packers gave the Bears last season. Sure, the Bears defense has reportedly shaped up in the offseason, but I doubt that will have an effect on the new WR1 in a Rodgers-powered offense.

Julian Edelman & Danny Amendola: With the quarterback equivalent of Super Saiyan Goku starting under center, and every other non-Gronk target either injured or just plain bad, these two are poised for a killer game. Edelman will benefit the most, since he was Brady’s number one target at receiver last year, and he will be a high-end WR2 this week. Amendola, whose went largely undrafted with an ADP of #186, will be a good flex option in deeper leagues, and even a risky flex in some 10-team leagues.

Busts: My Problem With Andre

Andre Johnson: With any luck (pun intended), Johnson will have a career year in 2015. However, that season won’t start well for him, as he faces a stingy Buffalo defense. Most of Andrew Luck’s passes will go to his number one target, T.Y. Hilton, leaving Johnson largely just a TD option this week. ESPN has Johnson ranked barely inside the top 25 this week, and I am inclined to agree.

Steve Smith, Sr.: I believe that, like Johnson, 2015 will be Smith’s year, as he’s the number one target in Baltimore’s offense. However, the Broncos defense will make the 36-year-old look geriatric: the only team that gave up less fantasy points to opposing receivers last year was the Seahawks. Smith can’t compete with that.

Jeremy Hill: This guy is a big deal right now. Matthew Berry recently claimed that Hill would finish as the number one fantasy back this season. While I don’t know if that’s the case (because Giovani Bernard is around to steal touches and the occasional TD), I do think he’ll be the number one back in Week 1, against a terrible Raiders run defense that allowed more fantasy points to opposing backs than any other team last season.

Surprises: The Daily Show With John Stewart
Jonathan Stewart: First of all, I apologize for that title; the poor guy has probably been hearing that stupid joke for fifteen years now. I just made the joke because I really miss Jon Stewart, ok? Trevor Noah just won’t be the same. But I digress. What was I saying? Oh yeah. Stewart is going to thrive in a Panthers offense that will hesitate to pass. Plus, Stewart is better than people think: for the last five weeks of last season, when he was fully healthy, he averaged 4.0 YPC and 12 fantasy PPG. So, with all that, this Sunday, the Daily Show with John Stewart will be in full swing.

Andre Ellington: The Saints were bad against the run last year. They were in the bottom five in opponent yards per game, touchdowns, and fantasy points. Favorable matchup notwithstanding, this week marks Carson Palmer’s return after a season-long absence, so the Cardinals will absolutely be relying on the run. There’s a chance that Ellington will be a top 15 RB this week.

Isaiah Crowell: There’s some back story with this one. Last Friday, during my fantasy draft, when I was unable to grab Nelson Agholor in the seventh round, I had a momentary lapse in judgment and picked Isaiah Crowell. I have since been mercilessly mocked for it by my league mates. Now, Crowell isn’t all that bad, and he’s supported by an excellent Browns line. This week, however, he plays on the road against a phenomenal New York Jets run defense, so if there is a week when I’ll be able to justify my stupid seventh round pick, it won’t be this one.

So that’s it my Week 1 preview. I am beyond excited to be a part of HBTSports, and I can’t wait for this fantasy season to unfold. At this point, I have nothing left to say except… How ‘Bout That Fantasy.