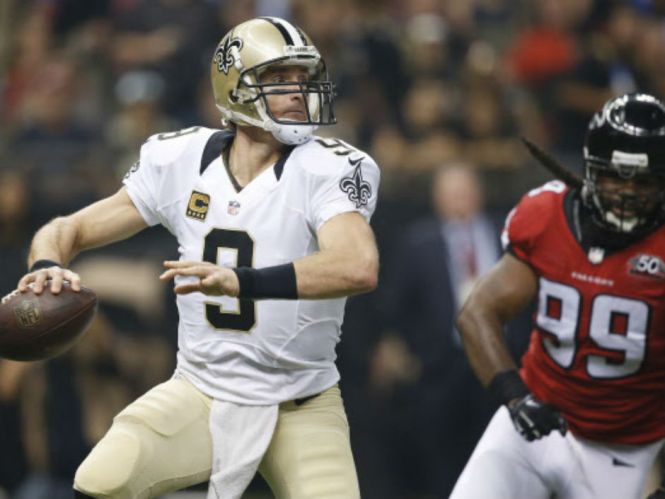 The New Orleans Saints took a trip down memory lane last night, riding the arm of Drew Brees and a turnover-fueled defense to a big NFC South win in the Superdome. Drew Brees was the ‘Brees of Old’, completing 30/39 passes for 312 yards, tallying a massive 91.8 QBR. It is tempting to think that Drew Brees could consistently be his old self and lead the team to high-scoring wins and some observers and fans will be tempted to interpret this game as a Divisional statement from New Orleans. Regrettably, one enjoyable night aside, this team is too deeply flawed to expect a playoff run. At 2-4 with a hugely flawed defense and deteriorating Quarterback, the Saints are all but done.

The Falcons, on the other hand, are a different story. The NFL has never seen anything quite like this season’s Atlanta squad. They jumped out to a surprising 5-0 start. The surprise was not THAT the Falcons were 5-0 as much as HOW they got there.

They feature one of the league’s best offenses (6th in DVOA) and a defense that has been better than anyone expected (league-average at 17th in DVOA). Julio Jones had one of the best 3-game stretches in the history of the NFL in his first three games, leading the NFL in receptions, receiving yards, and receiving targets. The most ardent NFL fans would have a difficult time recalling the last time a running back came out of nowhere to take the sport by storm the way Devonta Freeman has since taking over RB1 duties.

That regression arrived violently on Thursday night in the form of bad luck when the ball hit the turf. Students of the game have figured out that recovering fumbles is the product of randomness and chance, as opposed to being a measurable skill that players or teams can repeat. In the Falcons’ first five games, they fumbled four times and recovered three of them. On Thursday night, they fumbled 5 times and only recovered two, losing possession to the Saints three times, occasionally in critical moments.

Thursday night was not a Quarterback proving the doubters wrong and making a statement that he and his team were not quite down yet. It was simply what happens when a team that had been winning in unsustainable ways runs out of luck. The Falcons had any number of chances to get back into the game and even outgained the Saints 413-385. But those costly turnovers that they have luckily avoided bit them this time.

The good news for Falcons fans is that it’s not as though they can only win games through good fortune. Despite cooling off considerably in his last two games, Julio Jones is still arguably the league’s best Wide Receiver and Devonta Freeman looks completely unstoppable. Add in Matt Ryan and a surprisingly good offensive line, and Kyle Shanahan’s offense may be good enough to carry Atlanta to the NFC South Championship on its own.

Saints fans, enjoy the day. Drew Brees still has these moments of glory left. It’s not a coincidence that the Saints have won both games where they’ve happened. However, this game was less an opportunity gained for New Orleans and more an opportunity missed for Atlanta.

It was only a matter of time before the undefeateds started falling. There were 6 of them after five weeks, after all – a remarkable total. With a friendly schedule in the next month (@Tennessee, Tampa Bay, @San Francisco), the Falcons missed a chance to put pressure on Carolina and deliver an early statement in the division they should run away with. The NFC South is still theirs to lose if they learn their lesson from Thursday night: Don’t count on luck. Make your own.