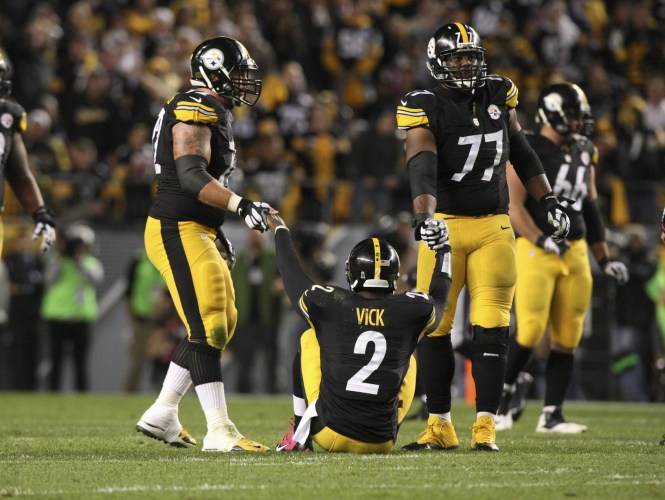 The latest installment in NFL’s weekly attempt to make football completely unwatchable featured an important AFC North divisional matchup between the Baltimore Ravens and the Pittsburgh Steelers. The Ravens were able to claw their way back from a 20-7 second half deficit and salvage a win. After a disappointing 0-3 start, the Ravens may have saved their season last night.

To this point, the Steelers have been an interesting case study in the emerging “kick it or go for it?” debate. Moving the extra point back to the 18 yard line is a cowardly half-measure that only makes extra points marginally more difficult, but the Steelers have championed the two-point conversion attempt this season. Their logic is sound in doing so. If you have confidence in your offense to get the two yard gain it takes to convert more than 50% of the time (a smart bet), you will end up in the net positive by going for it except in situations where the sure one point is more practical (increasing a 2-point lead to a 3-point lead, increasing a 6-point lead to a 7-point lead, etc.).

In this game’s waning minutes, Mike Tomlin made four important fourth-down decisions, all four of which backfired. Contrary to the musings of many fans, using hindsight as proof that Tomlin got his decisions wrong is completely wrong and unfair. It is, at its core, an exercise in faulting Tomlin for not having superhuman precognition.

The first of these decisions was to attempt a 48-yard field goal, leading 20-17 with 2:29 remaining in the fourth quarter, on 4th and 5. This decision made sense. The odds of converting on 4th and 5 are questionable. If Josh Scobee makes that difficult-but-make-able field goal, the Ravens have just more than two minutes to go the length of the field for a touchdown to win the game. Josh Scobee missed.

After forcing a turnover on downs in just four plays, the Steelers got the Ravens to burn through their remaining timeouts with running plays to set up a 41-yard field goal on 4th and 4. This is a perfectly make-able field goal that you need to be able to count on your Kicker to convert. Again, Josh Scobee missed. The Ravens were then able to drive into field goal range and Justin Tucker made the kick that the Ravens needed him to, tying the game before overtime.

Tomlin then understandably went away from kicking and attempted to get a first down by going for it on a 4th and 2 play from the Ravens’ 39-yard line. This likewise made sense. Who had faith in Josh Scobee making a 56-yarder at that point? You also have little to gain by punting in that scenario.

After another stop from the Steelers’ D, the Steelers faced 4th and 1 from the Baltimore 33-yard line. Demonstrating an understandable lack of confidence in his kicker again, Tomlin opted to go for it. The only case one could make in this scenario is that NFL coaches should give their kickers a chance to convert a field goal and win the game if you are within field goal range. I think that it’s hard to criticize Tomlin for not putting the game on the shoe of Scobee, given the events of the fourth quarter.

On the first 4th down, Michael Vick took the snap and attempted to rush around the left end for a first and was stuffed in the backfield. On the second play call, needing only one yard, the Steelers called a pass play that worked. Antonio Brown was open, but Michael Vick missed him.

In fact, he missed the throw badly, throwing high and to Brown’s back shoulder. I don’t disagree with any of the four “kick it or go for it?” decisions that Tomlin made in this game. However, I do not agree with the decision to put the ball in Michael Vick’s hands on both plays when you have Le’Veon Bell, perhaps the NFL’s best running back, on the field.

The Ravens were able to claw their way back from a 20-7 second half deficit, they had a kicker who could convert tough field goals in big spots, and they salvaged a win. The 1992 San Diego Chargers are the only team in NFL history to make the Playoffs after starting 0-4. By preventing that start, the Ravens saved their season.

The Steelers, on the other hand, may look back on this game at the end of the season as one of their defining moments. After sacking Flacco on 4th down with just more than 2 minutes left, the Pittsburgh Steelers had a 93.8% win probability per pro-football-reference.com.

With Ben Roethlisberger on the shelf for another 3-5 games, that’s a win that a team with playoff ambitions has to close out. The Steelers have games in the next four weeks against Arizona, Kansas City, and division-leading Cincinnati with Michael Vick under center. Ben Roethlisberger could end up returning to a 3-5 team facing long playoff odds.

The Ravens are still unlikely to make the postseason, and perhaps this game will prove to be nothing but a prolonging of the inevitable for them.

But it is hard to deny that this game has a much greater impact on the Steelers, who coughed up a win, and perhaps their season, in the process.