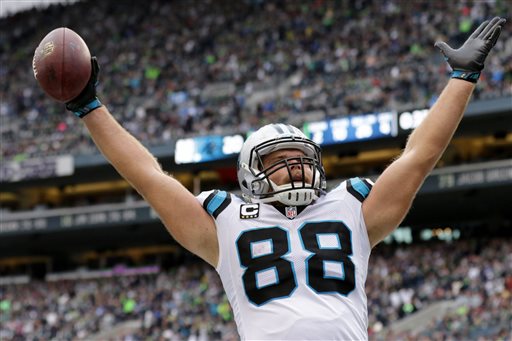 After keeping Cam Newton contained for most of the afternoon, the Seattle defense folded at the worst possible time, surrendering a late 23-13 lead on two straight 80-yard drives from Carolina. Newton was brilliant, completing 12 of 15 4th quarter passes for 162 yards and the go-ahead touchdown.

One sign of progress Seattle can take away from this game is that Jimmy Graham was finally properly utilized, targeted 12 times. That attention led to a strong performance (8 catches, 140 yards) and a useful passing attack against a solid defense.

It is difficult to know just how much trouble Seattle is in, if they’re even in any trouble at all. The divide between the good teams and the bad teams is starker than usual this season, leaving the wildcard spots usually claimed by mid-tier teams wide open. They have already lost 4 games, but three of them were on the road, all of them were close, and none of them were against a truly weak opponent. The schedule has been brutal to Seattle and it will soon lighten up considerably. Despite their apparent proclivity for wilting in the 4th quarter – They’ve had 4th-quarter leads in 5 of their last 7 losses. It’s a definite problem that must be fixed – but it’s difficult to look at the standings and imagine that the Seahawks will not be right there in the thick of the playoff conversation come December.

Meanwhile, the Panthers have surprised the league with a surprisingly good defense led by a VERY good secondary (4th in pass defense DVOA). Ron Rivera deserves a lot of credit for getting high quality play from that unit few expected much from. As for the offense, it’s hard to overstate what Cam Newton is doing so far this year. Carolina ranks 11th in offensive DVOA despite boasting a below-average offensive line, an old and deteriorating stable of running backs, and probably the worst set of wide receivers in the NFL. The fact that Newton can still make throws to those players when the defense knows that it’s coming says a lot about his ability as a passer.

The schedule finally got a bit tougher for the Panthers and they responded in great style. They came in for a lot of guff for beating up on the NFL’s whipping boys in their first four games, but this win against a quality opponent in one of the NFL’s most intimidating away venues validates them as early favorites for a playoff spot. It’s time to drink that electric blue Kool-Aid, football fans. Carolina is the real deal.

What Everyone is Talking About: Patriots 34 – Colts 27

The Colts held their own in a game many expected to be a revenge-fueled blowout, but the Patriots offense proved too much in the end.

Andrew Luck had his most promising starts of the season, going 30/50 for 312 yards and 3 Touchdowns. It’s tempting to imagine what he would be capable of if he even had just an average offensive line. New England has excelled rushing the passer this season (9.6% adjusted sack rate, tied for 3rd in the League), but the Colts offensive line offered little resistance. Luck was sacked three times and knocked down another ten by the Patriots defense.

As good as Luck was (especially given the circumstances), he wasn’t quite as good as Tom Brady, who picked apart the Colts secondary with Danny Amendola playing the surprising role of #1 receiver (game-highs of 7 catches and 105 yards). LaGarrette Blount has tortured the Colts in previous years, and Bill Belichick leaned on him heavily again Sunday night, giving him a game-high 16 carries.

Hyped up as a potential resolution to the NFL’s Summer of PSI, this game produced a predictable outcome and shed light on little we didn’t already know. The Colts have a very good Quarterback and very serious problems on their offensive line and defense. The Patriots are the NFL’s best team.

What Everyone Probably Should Be Talking About: Cardinals 13 – Steelers 25

Third-string Quarterback Landry Jones sparked a second-half rally for Pittsburgh, leading the Steelers to a very impressive win at home against one of the NFL’s more complete teams. After backup Michael Vick struggled to get the offense moving for the entire first half, Jones played brilliantly in the second, completing eight of twelve passes for 168 yards and two touchdowns. The primary beneficiary of Jones’ outburst was WR Martavis Bryant, who notched six catches for 137 yards and two touchdowns in his first game of the season after a knee injury and a 4-game suspension for violating the NFL’s substance abuse policy. The Steelers still have to negotiate tough games in the next two weeks with an away trip to Kansas City and a visit from the Division-leading Bengals, but by stealing an unlikely win, they kept their playoff hopes afloat. If Ben Roethlisberger can return to a team that is at or above .500, they will be in a very good position to make a run.

On the other side, Arizona has struggled recently after their historic first three weeks. By losing two of their last three, they missed an opportunity to establish a dominant early lead in one of the NFL’s better divisions. Their odds of making the playoffs remain high despite this loss, but it is a disappointing turn of form for one of the most exciting teams of the early season.

Your “Football is the Best” Moment of the Week: Texans 31 – Jaguars 20

Bill O’Brien’s decision to start Brian Hoyer was rewarded, with Hoyer posting big numbers and leading a fourth-quarter offensive explosion to give the Texans a divisional win. This also gives us a chance to discuss Wide Receiver DeAndre Hopkins, who is VERY good at football and one of the breakout stars of the 2015 season.

You “Football is the Worst” Moment of the Week: Chiefs 10 – Vikings 16

With Jamaal Charles out for the foreseeable future, Kansas City’s offense appears quite limited, with backup Charcandrick West getting just 33 yards on nine carries (3.7 yards/attempt). It’s never good for NFL fans when teams underachieve the way that the 1-5 Chiefs have this year. The more good teams there are, the more fun the league is. The Chiefs stink, and no one except Denver is better for it.

Redskins 20 – Jets 34: The Jets dominated the line of scrimmage on both sides of the ball, outgaining Washington 221-34 on the ground. Ryan Fitzpatrick played well again and the Jets kept up their strong early start. Injuries kept many major contributors out of the lineup for the Redskins, but there are no two ways to cut Kirk Cousins’ performance this year. He’s been one of the worst QBs in the NFL and he needs to turn it around if he wants this job more than one year.

Bengals 34 – Bills 21: EJ Manuel was better for Buffalo than he had any business being, but the Bengals are going to be very tough to beat this year when Andy Dalton is playing well. He had another great performance Sunday (87.4 QBR, per ESPN.com). The Bengals are all but a lock for the playoffs, but the Bills are very much on the bubble at 3-3. The next month will prove vital to their chances, with three of their next four games against AFC East divisional opponents.

Bears 34 – Lions 37: Detroit has had a lot of trouble passing the ball this year and Matthew Stafford had been having his worst season in years through five games. Jim Caldwell finally figured out the solution: throw the ball to Calvin Johnson. Johnson was the best player on the field (he usually is), reeling in 6 catches for 166 yards and a Touchdown. Lions finally get one in the Win column.

Broncos 26 – Browns 23: The Broncos defense looks so, SO good. They’re the rare kind of defense that is as much fun to watch as a high-powered offense. And Peyton Manning looks so, SO bad. He’s a trainwreck that you really want to look away from but can’t if you want an informed opinion. The Broncos are 6-0, but those have been six unconvincing wins against unconvincing opponents. After their bye week, they’ll play the Packers on Sunday Night Football to begin a much tougher slate of games. They can only keep winning games without an offense for so long.

Dolphins 38 – Titans 10: The obvious and obligatory preface is that “it’s just the Titans.” Having said that, the Dolphins were completely unrecognizable Sunday afternoon. Lamar Miller finally had room to run, amassing 113 yards on 19 carries. Ryan Tannehill wasn’t great, but he wasn’t a dumpster fire who couldn’t beat his own practice squad either. Even after being one of the NFL’s worst teams through five weeks, the Fish sit just one and a half games out of the AFC’s final wildcard spot with 11 games to go. If Sunday was a harbinger of things to come, the door is still wide open for Miami to make a run.

Chargers 20 – Packers 27: The Chargers second half rally proved too little too late with the Packers improving to 6-0. Forced into playing from behind for most of the game, the Chargers had to depend too heavily on their passing game, with Philip Rivers registering a gaudy 65 passing attempts. Aaron Rodgers continues to defy belief, playing brilliantly despite a depleted receiving corps. Circle November 8 on your calendars. Green Bay travels to Carolina for an early game with playoff implications.

Ravens 20 – 49ers 25: Goodness me, what is wrong with the Ravens? The Ravens have been able to remain competitive for years by remaining solid on defense and their offensive line. Injuries and an unusually shallow roster have let Baltimore down through their first 6 games. They rank only 19th in defensive DVOA and only managed 77 rushing yards on 22 carries (3.5 yards/carry). The kind of run the Ravens would need to make the postseason already seems nearly impossible. This is a very disappointing year from one of the NFL’s better franchises.

Giants 7 – Eagles 27: Woof. This was an ugly one. After being the worst team in the NFL at running the football in the season’s opening weeks, the Eagles finally managed to get running back and marquee free agent acquisition DeMarco Murray going Monday night (22 carries, 109 yards). The game was marked by poor play from both Quarterbacks, with Eli Manning and Sam Bradford combining for 5 interceptions including an Eli Manning pick six. This division is impossible to figure out. One week, one team appears to be a clear favorite, and the next, that same team is getting blown out by an unimpressive opponent. The Giants and Eagles are now tied for first place. NFC Least, indeed.