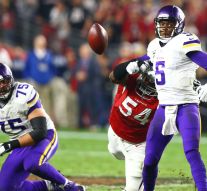 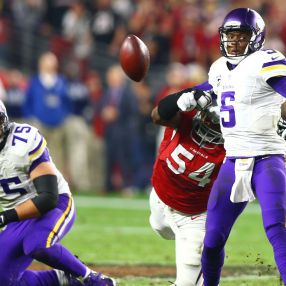 Minnesota managed to hang with one of the NFL’s best teams until the very end, but Dwight Freeney’s strip sack of Teddy Bridgewater in the game’s final minute ended their hopes for an upset on the road. This loss hurts for Minnesota for a number of reasons. The least important of them is that a win could have been interpreted as a jumping-off point for Quarterback Teddy Bridgewater. Though far from bad, Bridgewater’s second season has been rather unconvincing. He was brilliant on Thursday night against Arizona’s secondary, which ranks 3rd in pass defense DVOA. Bridgewater completed 25/36 passes, averaging 9.3 yards/attempt in the process.

More importantly, a road win against a Super Bowl contender would have been a signature win for a team that badly needs one. Minnesota has put themselves in good position to qualify for postseason play the way many teams have: by beating up on the weak parts of their schedule. All the same, the Chiefs are the only win the Vikings have against a +.500 opponent, and the Chiefs of Week 5 are a far cry from the Chiefs of today.

A victory in this game would have all but guaranteed the Vikings a Playoff spot. Minnesota still has winnable games in the next two weeks against the Bears and Giants with a matchup against division rival Green Bay in Week 17. Sitting one game back in the NFC North, they’re still very much in control of their own destiny.

As for the Cardinals, there’s little to say that hasn’t already been said. Carson Palmer still sits third in the MVP race behind Cam Newton and Tom Brady, but no one could really complain were he to win it. This is as complete a team as there is in the League with contributors all over the place on both sides of the ball. There is no ceiling on this team’s potential as long as Palmer is healthy and they’ll be a team to watch come January.

What Everyone is Talking About: Patriots 27 – Texans 6

The Patriots are invincible once more, their two-game skid now completely forgotten and irrelevant. This game was a wall-to-wall asswhooping, with Rob Gronkowski and Tom Brady reminding us that as long as they’re both healthy they’re pretty much going to do whatever the hell they want whenever they want to do it.

We’ve had plenty of fun at the AFC South’s expense in this space this year, but Houston’s defense is the best thing about any team in that division, and they’re still alive in this race. They may yet get to host a Playoff game. Playing in the cozy climate-controlled home atmosphere of Reliant Stadium Sunday night, Brian Hoyer had the kind of performance (8.8 QBR out of a possible 100) that reminds us why teams that don’t have Quarterbacks tend to get weeded out very early in the Playoff process.

The Patriots are back in the AFC’s driver’s seat and look like they’ll be pretty darn tough to beat in January. Fortunately for Houston, Indianapolis lost on Sunday as well, and both now sit tied for first place at 6-7 (not the only time you’ll hear that in this post. Christ.). Those two teams will square off next Sunday at 1:00 EST, possibly for the right to get annihilated by Kansas City in the first round this year.

What Everyone Probably Should be Talking About: 2-for-1 Special, NFC Contenders Edition
Falcons 0 – Panthers 38; Seahawks 35 – Ravens 6

While the other favored NFC contender was squeaking out a win against the Vikings on Thursday, Carolina and Seattle spent Sunday afternoon blowing the doors off of completely overmatched competition.

Cam Newton and the Panthers made everyone feel stupid for thinking the NFC South would actually be a contest five weeks ago, making Atlanta look like the bad, bad football team that they are. The MVP frontrunner turned everything he touched to gold. Again. He averaged 12.6 yards/passing attempt and made souvenirs for three more fans with a trio of touchdown passes. Carolina has remaining games against the Giants, Falcons, and Buccaneers. Would 16-0 surprise anyone? If you’re the gambling sort, go check out the odds on the perfect regular season.

Meanwhile, in the Pacific Northwest, Russell Wilson has lost his mind in the last month, going 89/118 for 1,171 yards, 16 touchdowns, and 0 interceptions. He’s been the best QB in the League in that timeframe and if he can play anything like he has in the last four games, it’s hard to create a scenario where the Seahawks lose another game this year. 2015’s iteration of the Legion of Boom got off to a rocky start by surrendering more than 25 points in four of their first six games. They have reverted to old form in their last 7 games, with their 7th-ranked DVOA defense serving as testament to how good they have been in the time since. Losing the remarkably effective Thomas Rawls hurts Seattle’s offense and they will have to hope that Marshawn Lynch can be effective upon his return.

Though their rough start had many observers questioning their Super Bowl credentials, the Seahawks have sorted out almost all of their problems and now look just as nasty as ever approaching postseason play. Remember that team that was a terrible play call and a once-in-a-lifetime defensive play from winning the last two Super Bowls? Turns out that they’re still pretty good at football.

It’s a Goddamned national tragedy that Seattle will have to go through either Carolina or Arizona just to get to the NFC Championship. I don’t want anything bad happening to any of those teams until it absolutely has to. Can we send Seattle to the AFC? 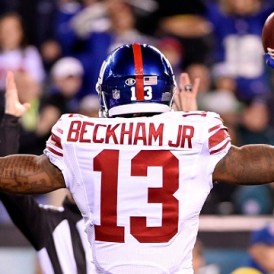 Your “Football is the Best” Moment of the Week: Giants 31 – Dolphins 24

Just when you think Odell Beckham Jr. can’t possibly outdo himself, he makes you actually wonder if he’s done it. Even if you don’t love the Giants, what Beckham is doing right now (6th straight games with more than 100 yards and the previously referenced circus catches) is sort of undeniable. He’s must-see-TV every single week.

OH! And the Giants won the game to keep pace with the Redskins and Eagles, who also won on Sunday to maintain the 6-7 threesome atop the NFC East. The Skins currently have the lead on tiebreakers, so they control their own destiny and face the easiest remaining schedule of the three. This division could break any number of ways. The Redskins or Giants (or both) could win out to finish at 9-7. If the Redskins flame out, the Giants could lose both of their next two games and still enter Week 17 with a chance to win the division by beating the Eagles. Plug your nose and keep following this race. What’s the prize for the lucky winner? Seattle in round 1. Congrats.

Your “Football is the Worst” Moment of the Week: Steelers 33 – Bengals 20

What should have been the game of the week turned into an uninteresting affair after an injury to Andy Dalton’s throwing hand ended his team’s chances at clinching the AFC North. Every NFL season features a broad swath of bummer injuries, but Andy Dalton’s thumb is the bummer-est of them all. The Bengals have been a treat this year with a real, tangible shot to win a Super Bowl. For nearly half a decade, you could have set your watch to the Bengals losing in the first round of the Playoffs, and this was the year it really looked like that could change. If Cincinnati enters the Playoffs with AJ McCarron or a rusted-over Dalton under center, they’re dead on arrival all over again. It’s the worst. It’s the absolute worst.

The Steelers, on the other hand, look like a team to be feared. This is the best offense in the League and there’s no reason to think they won’t put up 40 points against any team on any day. At 8-5, they still sit on the outside looking into the Playoff picture behind the Jets and Chiefs on tiebreakers. They have very little margin for error entering their matchup with Denver next Sunday. They could theoretically have the best offense in the League, finish 11-5, and then miss the Playoffs. Can we move Pittsburgh to the AFC South? The NFC East, perhaps?

It’s the middle of December, NFL fans, and we’re getting down to it.

Last reply was 4 months ago