We’ve reached the NFL’s midway point, so we’re going to get through NFL Hump Day by switching things up in this installment of the Pulse Check. After devoting a completely unacceptable percentage of my free time to watching the NFL this year, it’s time to hand out some (fake, imaginary) hardware! So without further ado, here are this season’s midseason awards. 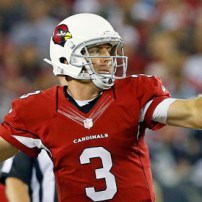 Palmer has picked up right where he left off last season before his second torn ACL ruined his and the Cardinals’ season. Arizona enters the midway point at 6-2, and it’s easy to make a case that they’re unfortunate to have that record. They’re 2nd in team DVOA, according to football-outsiders, and a team that was designed to lean on its defense has been one of the best offenses in football. Many fans and writers have been counting on the Cardinals to regress for a few seasons now, but they refuse to do so and Palmer is the biggest reason why. His QBR of 84.8 is the NFL’s best, 7.2 points higher than second-placed Andy Dalton. The Cardinals are better than ever and look poised for a run in January.

With apologies to: Eric Berry.

Gurley missed the first two games of the season, Amari Cooper has been very, VERY good for the Raiders this year, and this isn’t even a race anymore. That’s how good Todd Gurley has been since he returned to the Rams’ lineup. He’s already one of the two or three best running backs in the NFL. If you think that handing him this award requires any further justification, then you obviously haven’t watched him play.

Defensive backs have one of the sharper learning curves in the transition from college to the pros. All the same, the Chiefs’ rookie cornerback has been one of few bright spots on arguably the most disappointing team of the season. Peters was thrown into the spotlight, center stage with no chance to hide: he assumed the CB1 duties from the get-go and has played 96% of Kansas City’s defensive snaps this season, according to NFL.com. Peters is big, he’s physical, and he’s shown an ability to make game-changing plays (3 Interceptions). He’s a building block for the future of an underachieving defense. 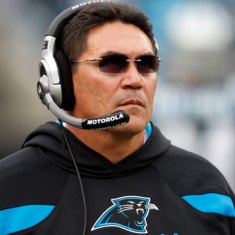 Many (myself included) expected the Panthers to fade after their 4-0 start against the dregs of the NFL, but they have tallied two signature wins (@ Seattle, vs. Green Bay) in the time since and can no longer be dismissed as a Super Bowl contender. Rivera has never gotten enough credit for his ability to coach up a defense, and his willingness to give superstar QB Cam Newton as long a leash as he wants on the other side of the ball has led to an offense that is not great, but is good enough to get wins (14th in offensive DVOA). Five or six coaches could make a claim to this award, but no one has done more with less this year than Riverboat Ron and he is most deserving.

The Broncos rank 1st in pass defense DVOA and 9th in rush defense DVOA, with an insane overall defensive DVOA percentage of -36.0%. To put that number in perspective, these are the defensive DVOA totals of the all-time-great Seattle defense of the last three seasons – -14.5%, -25.9%, -16.8%. They never came within 10% points of what Denver has done so far. The Broncos’ defense is stacked with contributors from top-to-bottom, but no player has been as important to their success as Talib. J.J. Watt is still the best defensive football player on Earth, but, eye-poking aside, Talib has been the best defensive player of this season. He’s been the NFL’s best cornerback and the most important player on a historic defense. 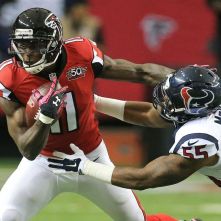 Jones has cooled off a bit since his historic first three weeks when he led the NFL in receptions, receiving yards, receiving targets, and receiving touchdowns, but this is the stats award, and no one’s posted a more impressive stat line than Atlanta’s #11. Jones leads the NFL in receptions (80), receiving targets (120), receiving yards (1,029), and is tied for 6th in receiving Touchdowns (6). He also leads all Wide Receivers in yards after the catch (363) and is tied for 3rd in receptions of 20 or more yards (13). With a good second-half, Jones could challenge Calvin Johnson’s record for receiving yards in a season, which would be quite an accomplishment in an offense with so many other weapons. The Falcons’ star is falling out of the sky at an alarming rate, but Jones is a singular talent at Wide Receiver and his accomplishments should be recognized.

This was never going to end anywhere else. 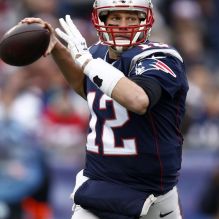 “But Pete, how can Tom Brady, an offensive player, be the MVP when Julio Jones, also an offensive player, was Offensive Player of the Year?” Fear not, child, these are the NFL Player Awards, where such logical disconnects and incongruities reign supreme. Every season, without fail, there is handwringing among writers and fans over the wording or meaning of the MVP award. “What does it mean for a player to be ‘most valuable?’” “How do we quantify overall value?” “Yes, Player X is the best player, but Player Y might have meant more to his team’s success.”

It’s already been pointed out in this post that J.J. Watt is the best player in the world, but he plays Defensive End, and his team is about to lose 10 games for the second time in three years. What is the floor on a team that has Tom Brady at Quarterback? What kind of world would you have to construct for that team to go worse than 10-6? The logic behind choosing Brady is that 2015’s NFL is a Quarterback’s League and that no player at any position comes close to a good Quarterback’s ability to swing games in his team’s favor. That’s what it means to be “most valuable.” Tom Brady is the best player on the NFL’s best team. He gets this award because he’s the league’s best Quarterback. Simple as that.