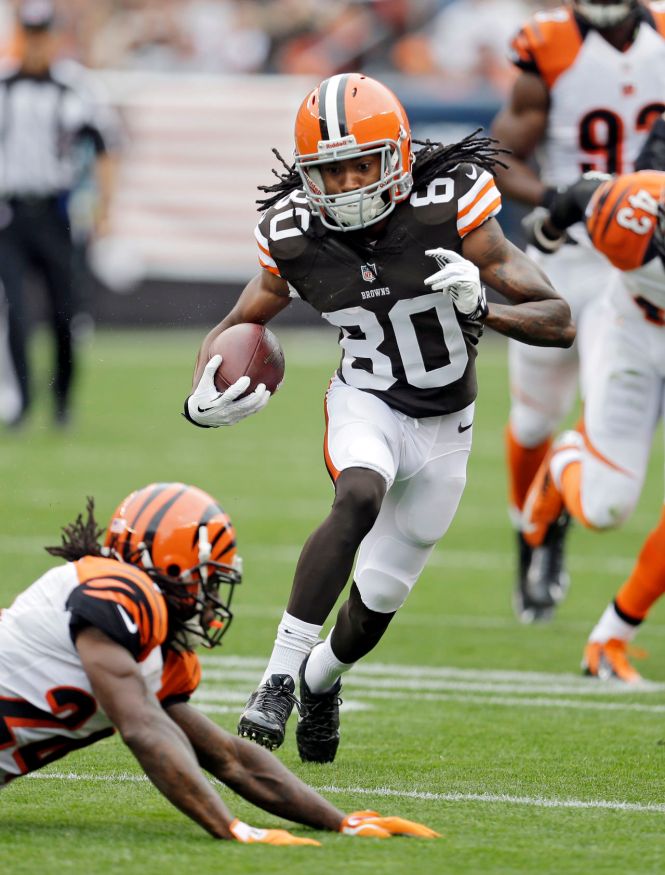 Relax and take a breath. It’s only week 3; whether you are 2-0, 1-1, or 0-2 the season is not over; there’s still plenty of football to be played. However, as many fantasy football players can tell you, without proper in-season management, even the best-drafted team can miss out on the playoffs. To help you avoid such a terrible fate, I compiled the best available waiver wire targets for Week 3 and beyond based on ESPN % Own.

44.4 standard points in 2 weeks is quite an accomplishment, however, before you start hailing him as your WR1 be weary he is still a Cleveland Brown, one with a rotating QB at that. Benjamin seems to be a deep threat like Josh Gordon (minus the weed), but it is hard to see this production stay at this rate. Considering he’s had the best fantasy start to a season since Tavon Austin in 2013 (who cooled off after his breakout) I would pump the brakes a bit before thinking he’s the next fantasy monster. I do recommend grabbing him and stashing him on your bench, because at the end of the day in the volatile world of fantasy football literally anything can happen. That being said he could end up a valuable player or a flash in the pan player, I’d rather have him on my team in case the former is the case.

To many Dion Lewis is not bulletin board worthy, but in the case of fantasy football he could be a potential breakout player. I know, the Patriots are the worst team to have a running back for because they seemingly change hands every game, this being said I am high on Lewis for 3 reasons 1) he can run 2) he can catch 3) he’s drawn the praise of grump Bill Belichick. Dion Lewis has seemingly won the starting job in New England as evident by his 85% of offensive snaps, this player seems to be more than just a poor man’s Shane Vereen. Lewis has extra value in PPR formats because of his QB (Tom Brady) and that even if the Patriots decide to change him to a third down or change of pace back he could merit a flex play because of his ability to catch the football and create room.

If you spent a high draft pick on Alfred Morris, Jones is a MUST grab free agent. The rookie rushed for 123 yards on 19 attempts against a tough Rams D while Morris gained 59 on 18 attempts. I’m not saying Jones will 100% take over for Morris, but with that kind of production it would be crazy for Jay Gruden to not figure a way to involve Jones into the offense which will cut into Morris’ touches/production.

Moncreif has garnered Andrew Luck’s attention, and that is a great thing. Moncrief figures to be the #2-#3 guy on a very pass heavy offense, and that’s assuming if T.Y. Hilton stays healthy and Andre Johnson gets up to speed. Moncrief has 13 receptions, 168 yards, and 2 TDs through the first 2 games this production doesn’t seem to be slowing down as the Colts go on to play Tennessee, Jacksonville, Houston, New England, and New Orleans over the next 5 weeks. I believe Moncrief has the potential to be a WR2-Flex play throughout the season as long as he and Luck can stay healthy.

After a disappointing rookie campaign it appears Ebron, the former first round draft pick, is the legit tight end Matt Stafford needs (especially in the red zone). Ebron has 9 receptions, 96 yards, and 2 TDs through the first 2 games and is a big red zone target (6’4” 265 lbs). Seems kind of touchdown dependent at the moment, but I can see him becoming the red zone target of choice for Stafford and the Lions.

Another tight end on the list, Jordan Reed is much more valuable due to his rapport with Cousins. Reed has 13 receptions, 145 yards, and 1 TD and has emerged as one of Cousin’s top threats especially with Jackson out with injury and going forward with Garcon being covered heavier. Reed is a must have tight end in all formats, even if it just for depth.

Andre Ellington is down with injury and Chris Johnson has been mediocre filling in his steps, this is where Johnson steps in. Johnson rushed 5 times for 42 yards and a TD while also amassing a 108 yard kick return for a TD. The rookie has earned the praise from his head coach calling him, “Matt Forte like” and it won’t be much longer until the Cardinals give up on old CJ2K and injury prone Ellington and go with the young (potential) stud.

Don’t look now but the Raiders have competent QB in Derek Carr and a legit #1 receiver in Amari Cooper; but what does this have to do with Crabtree? Crabtree fits to receive the workload of a #2 receiver on a team that will be passing quite a bit. For instance this week Browns star Joe Haden will almost definitely be shadowing Cooper, look for Crabtree, who got 16 targets last week, to get into the mix. In the upcoming weeks the Raiders play abysmal Chicago, Denver, San Diego, and the Jets. Crabtree COULD benefit from being the #2 receiver and finally have some fantasy relevance again; but, as always, nothing is guaranteed in fantasy football.

Players To Keep On The Radar: