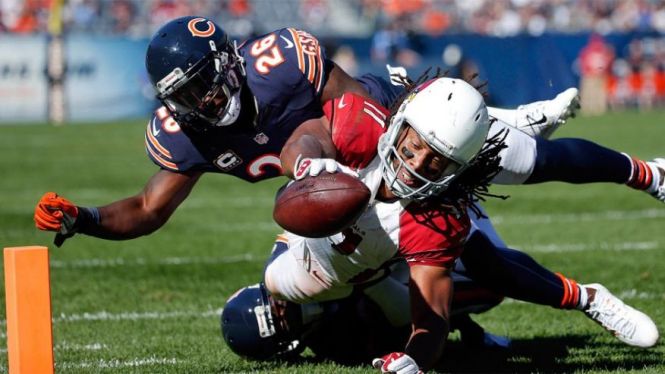 That was rough. It was like a car crash—I just couldn’t look away from the crumpled wreck that was fantasy Week 2. There were some highlights—Larry Fitzgerald, some guy named Crockett—but far more lowlights. Star-QBs dropped like flies and star-RBs dropped balls. Seriously, there were so many turnovers this week—and, surprisingly, not all of them were by Andrew Luck!

I’m sure there were plenty of people out there who had painful weeks. I was definitely one of them. Here I am, though, sifting through the carnage, imparting my fantasy wisdom, recapping the highs and lows of the ugliness of Week 2. Let’s get to it.

Arizona Cardinals offense: The times they are a changin’. One of the league’s defensive powerhouses has been one of the most productive offenses of the past two weeks, scoring more points than any other team in the league—and oh, how the fantasy points have abounded. Yet somehow, no one has realized it yet. Despite being currently ranked 3rd among QBs, Carson Palmer is available in 32 percent of ESPN standard leagues. David Johnson, who could end up being an every down back by the end of the season, is available in 50.8 percent. And, though they are owned in most leagues, Arizona’s top two receivers—America’s Favorite Dreadlocked Old Geezer, Larry Fitzgerald; and America’s Favorite 19th Century Abolitionist, John Brown*—both looked explosive and have high ceilings going forward, so now is the time to buy low. As always, the Cardinals have tough divisional matchups against Seattle and San Francisco this year, but this offense looks like it’s clicking in Bruce Arians’ 3rd year. I have high hopes for them.

*If you didn’t get that one, you probably didn’t do well in your high school American History class.

Dion Lewis (RB, New England Patriots): In my recap last week, I said that Lewis should be avoided at all costs. However, like a judge in a Tom Brady court case, I have overturned the previous verdict. Lewis was a three-down back, who did the impossible: he played explosively against the doubly alliterative nightmare matchup of the Rex-Ryan-Buffalo-Bills. Lewis should be a bench stash for now, since there are still obstacles for Lewis to overcome: the Patriots will always be a pass first offense; Bill Belichick hates all of our fantasy hopes and dreams; and LeGarrette Blount will vulture goal-line carries, since (I’m pretty sure) he’s half-man, half Mac Truck. However, now is the time to pick Lewis up, because he has some serious potential, and it’s likely that his value will only increase from here.

New York Jets wide receivers: I had my doubts about Eric Decker and Brandon Marshall coming into this season. They were both plagued by injuries last year, and they’re… well, they’re playing on the Jets. With the departures of Rex Ryan, John Idzik, and (hopefully) Geno Smith, the Jets look to be on the upswing. The prime fantasy beneficiaries of this upswing so far have been Decker and Marshall, the Jets’ new Dynamic Duo. Well, the Jets’ second new Dynamic Duo—the real pair to watch is Ryan Fitzpatrick and that ridiculous lumberjack beard; but, I digress. Much like the rest of the Jets organization, Decker and Marshall have potential, and they are prime trade candidates right now.

The Indianapolis Colts’ entire stupid team: “I felt a great disturbance in the Force. As if millions of voices suddenly cried out in terror and were suddenly silenced.” In that quote, Obi-Wan Kenobi was not actually talking about the people of Alderaan as it was blown up by Grand Moff Tarkin as a demonstration of the Death Star’s power He was talking about the ripples sent out across the fantasy world as owners of basically every player on the Colts offense—Andrew Luck, Frank Gore, T.Y. Hilton, Andre Johnson, and even Adam flippin’ Vinatieri—let out simultaneous cries of agony as their chances for a Week 2 victory went up in flames.

Here’s the thing, though: unlike the denizens of Princess Leia’s home planet, there is hope (a new hope, perhaps…) for owners of these players. For one thing, the Colts schedule gets a lot easier from here on in (they go up against Tennessee and Jacksonville over the next two weeks). For another, the Colts have one of the best quarterbacks and one of the best coaches in the NFL. They’ll make the requisite adjustments. So, for anyone who owns those players, do not panic; keep them in your lineup; and, most importantly do not rush into any trades that you’ll regret. Oh, by the way, in case you couldn’t tell, I’m really excited for the new Star Wars movie.

Tony Romo (QB, Dallas Cowboys): Water is wet; Donald Trump says racist sh*t; and Tony Romo gets hurt a lot. It’s good to see that some things never change. For anyone who drafted Romo (hopefully not before the ninth round), Sunday’s game was a tough break (pun intended). The waiver wire is your friend, Romo owners. My top pick is Carson Palmer, but if he’s not available, Teddy Bridgewater, Marcus Mariota, and even Andy Dalton have been solid over the past two weeks. Those who are really clever could even rotate based on matchup, perhaps using the “Love” section in the HBT’s Weekly Love/Hate Column as advice (*wink wink*).

Jeremy Hill (RB, Cincinnati Bengals) and DeMarco Murray (RB, Philadelphia Eagles): It’s hard to say which of these two first-round picks is more concerning going forward. Murray appeared to get hurt up a few times, playing into concerns about his risk for injury after a high-workload 2014 season. What’s even worse, Murray managed only 2 yards on 13 carries (that’s .15 YPC, people), and the entirety of Chip Kelly’s offense looked anemic.

Hill, on the other hand, fumbled twice, and lost the bulk of his touches to Giovani Bernard, who had 123 yards on 20 carries. In other words, if Hill doesn’t earn his coaches’ trust back quickly, he could lose his job to a one of the league’s better power backs. Hill and Murray both have the talent to turn things around, but their owners should plan for the worst and augment rosters with RBs from waivers or trades.

That’s all for now. Be on the lookout for our upcoming Week 3 Fantasy Preview and a special new fantasy competition between a few of the HBT writers.

As always, How ‘Bout That Fantasy.