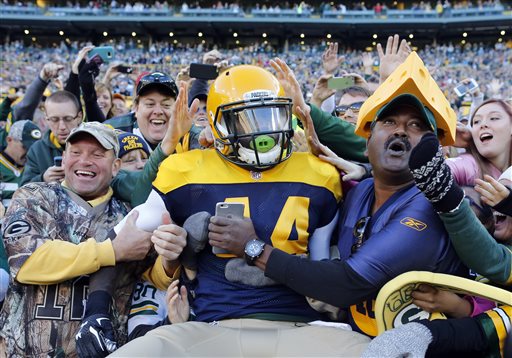 After a week where familiar storylines with odd names substituted in (a Green Bay running back shines while a New Orleans’ Tight End racks up yards and TD’s), the prudent owner knows that there is always some treasures just waiting to be picked up. The fantasy football waiver wire is ever important, especially at this time of the year as injuries or sub-performance creeps up and teams take a week to kick back and relax. Sure, some of these potential gems might not be the flashiest guys on the market, but for those of you crippled with bye weeks and/or injuries, some of these guys below might just save your season… or at least keep you relevant for another week. Either way, good luck.

Hoyer is now the starter in Houston supplanting Ryan Mallet on the depth chart. This could be because Ryan Mallet is not good, or because Hoyer has thrown for 7 TD’s and 837 yards in his last 3 games with only 1 interception. This is in part due to his chemistry with NFL leading receiver DeAndre Hopkins and running back Arian Foster. Look forward to Hoyer enjoying more success under center.

Eddie Lacy is looking like the biggest bust of this 2015 fantasy season. Have no fear James Starks figures to make a big impact considering he torched San Diego Sunday for 112 yards on 10 carries (1 TD) and 1 reception for 5 yards (another TD). Not saying he will 100% take over the roll, but it doesn’t appear Lacy is 100% healthy and Starks could reap the benefits of a hobbled Lacy.

Watson has TDs in back to back games. One game (this past Thursday) featured Watson hauling in 10 passes for 127 yards and a score. Not expecting Watson to be the next Jimmy Graham in New Orleans, but if you have an open spot I would consider stashing him; you just never know (see Gary Barnidge).

Dallas is going through a makeover with Romo and Dez out. Cassel is expected to start at QB and they’re even shuffling the O-line a bit. With this being said it came out last week that the team might consider starting Michael over Randle for this upcoming game versus the Giants. Thursday running back coach Gary Brown said that the team was, “going to take the reigns off” him. Considering this is the same line that allowed Murray to have a career year, he has 130 yards total this year (Randle has 116 in 2 weeks), expect Michael to take advantage.

LaFell is due to come back in week 7 coming off the PUP list. One of Brady’s better targets if healthy could fill in the Flex position for weeks to come, this is all assuming he is good to go. According to Mike Reiss of ESPN LaFell is recovering on schedule, this should merit some attention for the receiver.

With Bortles resembling an actual QB and playing like the first round pick Jacksonville hoped for there is some value for Thomas. In his second game back in action Thomas and Bortles connected 7 times for 78 yards and a score. Although he was a bit dinged up in that contest if you are looking for tight end help, consider Thomas who has proven the past few years he can be a legit fantasy tight end.

Players to Watch out for: