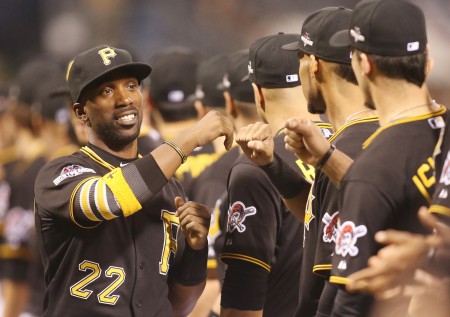 2015 Season: The Buccos were victims of the new and improved MLB playoff system last year. Their 98 wins would have been enough to win EVERY SINGLE other division in baseball except, of course, the one in which they play. The NL Central boasted the Cardinals and their 100 wins, as well as the much improved Cubs and their 97. After getting the Jake Arrieta treatment in the single elimination WC game vs Chicago (their 3rd exit in as many years in the winner take all Wild Card), they were sent home packing. Many people at the intersection of the 3 rivers saw this as an unfair outcome for a team that had done so much good in the regular season, but that’s the reality under the current postseason format.

The pressure will be even greater in 2016, as this current iteration of the Pirates (and the expectations of their fanbase) have morphed from where they were circa 2011-2012 or so (hey, we’re good now, this is fun!) to where they are now (we’re good but don’t win anything… enough is enough!). These guys are kind of like the Cincinnati Bengals of baseball in terms of how much expectations have escalated in the past half decade after such a long period of malaise.

Key Additions: They signed a couple of solid back of the rotation starters in Jon Niese and Ryan Vogelsong. Both are unspectacular yet more than competent major league starting pitchers, and at the price/assets they acquired them, both can be considered great moves for this small market team. Offensively, they also added solid veteran John Jaso from Tampa, and he is a competent backup catcher, which has value in a game where even the best and most durable guys only play 120 games.

Key Losses: AJ Burnett and his entertaining huckleberry demeanor retired, and they also lost slugging corner infielder Pedro Alvarez (who has come a long way since he took me deep in legion ball in the summer of 2003). In addition, they also lost effective middle man Anotonio Bastardo, but their bullpen, one of the best in the game, will be just fine. To top things off, Neil Walker, the longtime second baseman and fan favorite who was here during the lean years, is now a Met.

Pretty damn solid up and down as you can see. No real weak spots. The Pirates offense didn’t exactly put up ridiculous numbers in 2015, but they were more than adequate, scoring the 11th most runs in the MLB, and had the 9th highest OBP (.323 is a good number in this era of pitching and suffocated offense). The Pirates will remain status quo this year, since most of the key contributors minus Alvarez are back. This lineup is one of the youngest, as per players under 30, in all of baseball.  We all know about Andrew McCutchen and what he can do at this point, as he has been a five time All Star and former MVP, but the Buccos were really helped last year by the emergence of toolsy Yoenis Cespedes clone Starling Marte. He posted a .287/.337/.444 slash line in his age 26 season, and it stands to reason that given his lack of experience he may have not hit his peak yet. Hopefully for them, they get a better season out of Polanco, who underwent a serious sophomore slump, but other than that scoring runs should not be a huge issue with this team.

Again, very solid up and down. The retirement of the late-career-resurgent AJ Burnett would have hurt this team more if they didn’t have this 1-5 depth. Gerrit Cole is a former #1 overall pick, and he certainly has the fastball and the mound presence to prove it (his 2.60 ERA was outstanding as well). He is a legitimate ace, and if the Pirates are in the playoffs he will get the ball 3 times in a 7 game series. Liriano is the type of player that makes me personally feel really old. I remember him when he was Johan Santana’s “mini me” in Minnesota back in 2006 when he broke out as a 20 year old. To be honest, despite an up and down career trajectory (he was out of baseball entirely for a couple years in the late 2000s) he has had a very good career. Since he came up at such a young age, it seems like he has been around forever (very much like an NBA lottery pick) but he will only be 31 opening day. At the back end, one guy to keep an eye on is Niese. There were some Mets fans (like myself) who 3-4 years ago thought Jon had the potential to be a solid number 3 starter, and he has had seasons (2011, 2014) where he has pitched like exactly that. The fact that he’s the 5 here really speaks to how strong this starting staff is.

The Pirates trotted out one of the best bullpens in baseball last season, and it figures to be another prominent strength in 2016. Pittsburgh relievers put up a 2.67 ERA last year, the best mark in MLB. Closer Mark Melancon led both leagues with 51 saves, blowing only two chances all season. Left-hander Tony Watson was equally brilliant as a setup man, surrendering only 55 hits and a 1.91 ERA over 75.1 frames. The man literally gave up 55 hits all season, that’s nuts. These two should continue keeping the eighth and ninth innings on lock down. Newcomers Neftali Feliz and Juan Nicasio are candidates for mop-up duty. 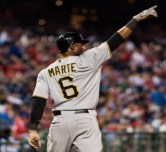 I think it’s gotta be Marte. This season can go one of two ways for him, as it always does with young players who have early success. Option 1: pitchers figure him out, take advantage of his aggressiveness at the plate, and his average submarines down to the .230s, zapping his power in the process. Option 2: is he will take yet another step in his development and provides McCutchen with some great protection in the lineup. I happen to lean towards the latter when it comes to a player of his caliber. If he and Cutch can combine for 220 RBIs this offense can go from 13th to a top 6-7 lineup.

HBT’s prediction: Overall this is a very good team, and if they played in a different division they would have a much better chance to make noise in the postseason. I am picking them to finish 3rd in the division once again, and whether or not that 3rd place finish gets them a dance with Wild Card Wendy once again completely depends on how the non-division winners in the NL East and NL West fare. In my heart of hearts, I do not think it will happen because I think both the Nats and Giants will be back with a vengeance: 92 wins, but no playoffs