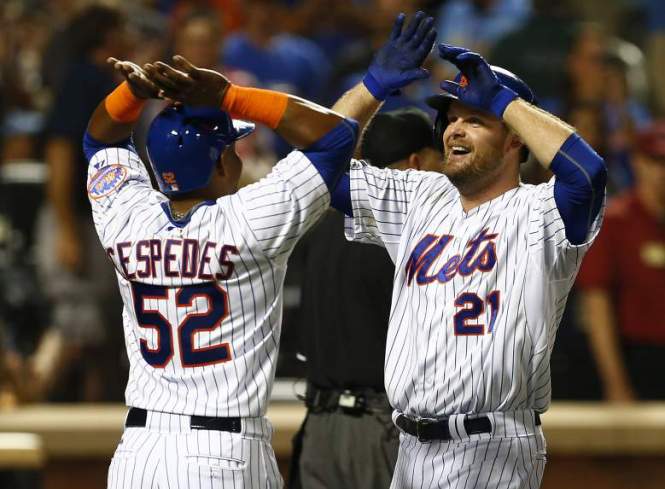 2015 Season: OH MY GOD THE METS ARE GOOD! WHAT DID I DO TO DESERVE THIS?! Those were the thoughts that went racing through my head as a Met fan pretty much every day between July 24th last year up until 3 months later when they went down 2-1 against the Royals in the World Series. People knew going into the year that the Mets rotation would be good enough to keep them in contention until August or so, but what they didn’t know was how much of an impact a couple of trade deadline acquisitions would make. Getting Cepedes, Uribe, Johnson and Tyler Clippard bolstered this team in ways not even the most diehard fanboy could have imagined, and the Mets went from average team with great pitching and a terrible offense, to dangerous team with world class pitching and an average offense.

Neil Walker will be without a doubt an offensive downgrade from Murphy, but he is a better defender (everyone is) and is still a competent end-of-the-lineup major league bat. I do not think the Mets will be in trouble losing Murphy’s bat unless others get hurt and Walker is forced to be at the top of the lineup.

Cabrera has really fallen from where he was when he flashed 25 homer power for a year. Now he is an average to slightly below average major league starting shortstop. Thing is, other than a couple Wilmer Flores hot streaks last year, the Mets have gotten little to nothing from their shortstops since the Reyes departure after the 2011 season, so unless Cabrera goes blind up there and hits .190 he will be fine.

Wheeler was once considered part of the Mets “big three” pitching prospects along with Harvey and deGrom. Now, it’s more like a big four, and Wheeler is not one of them as Syndergaard and Matz have collectively replaced him. The Mets are keen on going to a 6 man rotation at times, which would make room for Wheeler somewhere. Personally, I think Wheeler (and especially after going under the knife) has a lower ceiling than the other Mets arms, but we will see. Bastardo is a solid lefty to bring out of the pen, and you can never have too many of those.

I already wrote extensively about Murphy in the Nationals preview, so I won’t rehash it here. I just think it’s very unfortunate for the Mets that Murphy will probably play 20+ games against them this year for the Rival Nats, and thus likely rack up over 80-90 plate appearances vs his former team. Oh well, breaking up is always hard to do. To put it simply, given David Wright’s constant injuries, Daniel Murphy has been the best Met (by far) in the post-Reyes/Beltran/Delgado era. It is a testament to how underwhelming this team was from 2009-2014 to make that the case, but it is.

Overall, this can be an above average lineup, but they need a lot of things to go right, and ultimately the Met fan in me is weary of all the question marks. Granderson was AMAZING last year, absolutely clutch in every way. He is a good ballplayer with an all-star pedigree, but I do not think he will do it again. The bright side is that he walks a ton so him batting .259 is OK because his OBP ends up in the .360s.

The last time David Wright was healthy and played 150+ games was the last time he looked like an impact player: his 2012 season when he hit .312 and he hit over 20 home runs. The Mets will need him in the worst way here if they indeed plan on batting him this high out of respect instead of someone like Conforto.

Duda has shown that he is a solid slugging first baseman, but he will never be what some Mets fans want, which is a 35-40 homer guy. On the other hand, he proved last year that his 30 home runs in 2014 was not a fluke, and you can do a lot worse as far as cleanup hitters go.

D’Arnaud needs to stay healthy. His inability to stay on the field is the only thing that is preventing people from saying the Mets won the RA Dickey trade in a landslide. He is a guy that I think provides an organization with interesting debate because he is fragile enough and a good enough hitter where I am sure Mets executives have toyed around with moving him from catcher at a young age like Schwarber in Chicago, but at the same time, he is a very good defensive catcher so he has value there too.

Anything this squad gets from Walker and Cabrera will be a plus. The latter was an All-Star two years in a row with Cleveland in 2011 and 2012, but he has forgotten how to hit since. 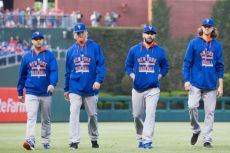 Colon sticks out like a sore thumb on an otherwise beautiful hand, though his stint in the rotation will only be temporary if things go according to plan. Zack Wheeler, another young power arm, is working his way back from Tommy John surgery and is expected back in midseason. In a perfect world, Wheeler returns and Colon shifts to the bullpen, where he was excellent last postseason.

Harvey and deGrom are bonafide aces and Syndergaard pitched at that level after being called up in mid May. There isn’t another team in baseball with three elite level pitchers who potentially end up tin the top 10-15 pitchers this year.

Working his way towards that level, Steven Matz is one of the very best pitching prospects in the game (and is still Rookie of the Year eligible in ‘16). Matz had a 2.68 ERA in 50 1/3 innings last year, including the postseason. Including Wheeler, deGrom is the oldest of the team’s five stud starters at 27, and they’re all under team control through at least 2018. Along with Chicago, this will be one of the best rotations in the National League, if not THE BEST in baseball.

Buddy Carlyle recorded the first save for the Mets in 2015. No joke. Times have changed. Fast forward to present day, as Carlyle was just released a few days ago while former closer Jenrry Mejia was recently banned for life after failing his third performance-enhancing drug test in the span of 10 months.

Reed lost his closer’s job with the Diamondbacks last year but had a successful run as a setup man with the Mets after being claimed off waivers, allowing only two runs in 15 1/3 innings. He will be looked upon to extrapolate that small yet excellent sample size considerably this year.

Bastardo and Jerry Blevins give Collins two reliable left-handed options for those tough NL East lefties like Bryce Harper and Freddie Freeman. Meanwhile Robles, who looks and carries himself like an 181st street Latin King, struck out 61 batters in 54 innings last year and could emerge as a setup option of Reed falters. He is wild though.

For the Mets offense to continue its late season surge going into 2016 Michael Conforto will need to be a big part of it. Many of the rosier Mets outlooks involve Conforto taking that 2014 Anthony Rendon-type leap, and going .285/25/85 over the course of an entire year. Color me skeptical. 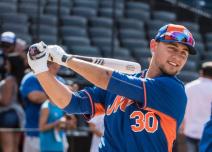 Conforto is clearly talented, and he has the 1st round pedigree to prove that his sweet swing last year was no fluke, but expecting a 23-year-old kid to avoid any sophomore regression as the league discovers his weaknesses is tough. MLB pitching is the hardest to hit on the planet, and they have ways of humbling young hitters who get off to hot starts. It even took Bryce Harper over 3 years and almost 2000 plate appearances before taking off last year. Number 5 starters in today’s game have the ability and knowledge to get you out all four times they face you on a given night, and Conforto has holes in his swing.

HBT’s Prediction: I am nervous about this team. There is a scenario I could see where the pitching is just top 5, and not number 1, and the offense is held back by Wright’s injuries, Granderson’s regression and Conforto’s inability to take the next step. That team I just described would still win 87 games due to how great the starting staff is, but the season would be considered a disappointment after last year’s NL pennant. Overall, I think this Mets team will make the postseason, however they will be neck and neck with Washington for the NL East title. 94 wins.