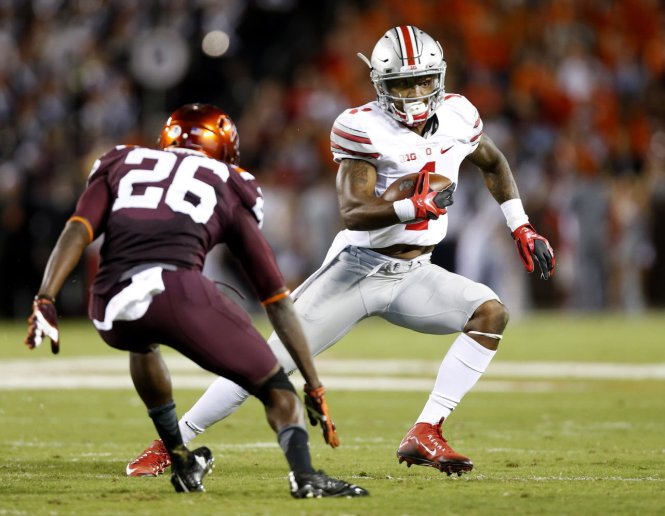 Here’s a list of a few things you could have done in 8 months:

-Outlast both William Henry Harrison and James A. Garfield as presidents

-Not watch any college football

8 months is a long time. A long, dark, sad time, bitterly known as the “off-season.” The wait is finally over, week 1 is in the books and we have the makings of a great season on our hands.

I’m contractually obligated to note my potential bias to the University of Oklahoma (Boomer Sooner) and like nearly every Power 5 team facing off against a non-Power 5 school they looked good (sorry Penn State). They were nearly perfect in fact, capped off by dominant wins from schools like Ole Miss (76-3 over Tennessee-Martin) and Georgia Tech (69-6 over Alcorn State).

Continued dominance from major programs over FCS opponents brings up the question of whether or not such one-sided matches should continue. Sure, it’s not always a guaranteed victory but often these games are decided early on. Coaches like West Virginia’s Dana Holgorsen are ready to see scheduled games against the FCS end, and with the playoff selection committee putting more emphasis on strength of schedule, this might be a trend we see in the future.

New Michigan coach Jim Harbaugh might feel a bit differently about having a strong out of conference schedule after a loss against a tough Utah team in his Wolverine debut. Few new coaches have had as much pre-season focus as Harbaugh, but the turnaround won’t be instant in Ann Arbor. Last year Michigan went 5-7 and finished 89th in yards/game, 93rd in points/game, 70th in points allowed/game and 60th in yards allowed/game, an underwhelming 2014 to say the least. Harbaugh has his work cut out for him for this season, but optimism remains high in Ann Arbor for the future.

Unfortunately, week one was a tough one for a number of high profile athletes across the country as well. Scooby Wright, one of the nation’s premier defensive backs and a major part of the Arizona Wildcats success last season, will miss three to four weeks after undergoing minor knee surgery. Taysom Hill, starting quarterback for the BYU Cougars and early Heisman hopeful, suffered a season-ending Linsfranc fracture in his right foot after a touchdown scramble. Tarean Folston, leading rusher for Notre Dame last year with 889 yards and 6 touchdowns, tore his ACL and will similarly be out for the season. Fellow RB James Conner, the ACC’s reigning top rusher and the conference player of year, underwent successful knee surgery after his second quarter injury, also ending his season before it began. This is not only a blow to the University of Pittsburgh, but to the ACC and the sport as a whole. The game is better when the best players are on the field (Conner had 77 yards and 2 touchdowns on 8 carries in his limited action) and the All-American will be sorely missed.

And speaking of Notre Dame, what a game they had against Texas, looking dominant on both sides of the ball. Malik Zaire (19/22, 313 yds. 3 TDs.) showed that he has the potential to lead the Irish to a successful season, while touted freshman running back Josh Adams trotted into the end zone on his first collegiate carry. And let’s not forget that the Notre Dame defense that held the Longhorns to only 163 total yards of offense.

Is it worth talking about Ohio State? They looked…well, just as impressive as we expected. The first unanimous number one team in the AP poll acted the part, and many think they will only improve from here. Braxton Miller pulled off a video-game touchdown run in his debut as H-back and Zeke Elliot tore away for an 80 yard TD run of his own. Despite a slightly shaky second quarter, the Buckeyes cruised to victory and, as expected, will be the team to beat throughout the season.

Notable games around the country:

#2 TCU had a tough time beating unranked Minnesota on the road. The Golden Gophers are emerging as a talented team in the BIG 10’s West Division and early Heisman Frontrunner Trevone Boykin looked solid (a few miscues, but solid overall). A fairly easy schedule awaits TCU, not really facing a quality opponent until late October but they will have to play better if they are to earn their #2 ranking, their highest preseason ranking in school history.

#15 Arizona State couldn’t keep up with an under the radar Texas A&M team (who, as of this writing, is unranked). The game was close until the Aggies pulled away in the fourth quarter, showing why they deserve to be in the conversation near the top of the SEC.

#3 Alabama took care of #20 Wisconsin, despite talk of potential questions at QB. One week isn’t enough to put to rest every fear, but neutral site win over a ranked opponent certainly gives confidence to senior Jake Coker. The Alabama defense held the Badgers to 40 rushing yards.

We’ll close with a shout-out to Temple who ran Penn State right out of Philadelphia in a 27-10 victory that looked even more impressive than the score showed. Or at the very least, more meaningful. This was the Owl’s first win over Penn State in 74 years. T for Temple U!