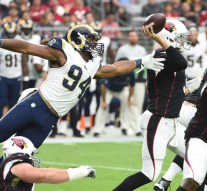 Check back every Tuesday, all season long, for the Pulse Check, our weekly NFL Recap.

Those fuckwits among us in the football-watching community who picked Arizona to win the Super Bowl this year are having to do a lot of soul-searching today as Arizona dropped to 1-3 behind another disappointing performance.

Quarterback Carson Palmer was under intense pressure all afternoon from the Rams’ defensive front and his discomfort in the pocket led to another worrying display. Palmer was one of the NFL’s best players in 2015, which was shocking considering he was coming off of his second torn ACL. But Palmer would hardly be the first quarterback to see his production drop off of a cliff thanks to declining health. It’s fair to wonder whether or not the 36 year-old can lead the kind of downfield attack that Head Coach Bruce Arians favors. If you can’t attack the secondary directly, you’re not much use in this offense.

Now, getting to the pleasant surprise among these two teams – holy crap the Rams might actually be good at football this year. With this game, LA has managed to get wins against both Arizona and Seattle in the first four weeks of the season. The Rams still have absolutely nothing happening on offense, but that hardly matters with a defense that looks this good. Aaron Donald has been the best player of the season’s first four weeks and he had another colossal performance in this game.

We knew the Rams’ front seven would be good, but the secondary was much less certain before the season. The Cardinals have arguably the NFL’s best set of receiving targets and LA’s defensive backs kept them bottled up all afternoon. Trumaine Johnson was particularly impressive with an interception and two more passes defended.

With an offense that looks this inept, there’s a very clear ceiling on what LA can accomplish this year, but with two of their tougher games out of the way and an exciting 3-1 start, Rams fans can dream about a trip to the playoffs this year.

What Everyone is Talking About: Falcons 48 – Panthers 33 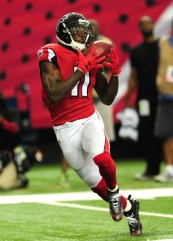 It’s another divisional game where the team we thought would be fucking amazing dropped to 1-3. Cam Newton doesn’t look like himself, which is plenty worrying on its own, but the Panthers defense was among the League’s best this year and Julio Jones absolutely embarrassed them yesterday. Jones went ballistic all over Carolina’s rookie cornerback pairing, catching 12 passes for 300 yards and a touchdown in one of the finest individual performances you are ever likely to see.

The inexperience in Carolina’s secondary was their biggest concern going into the season and this was a worrying display. Rookie defensive backs often take some time to adjust and the rest of the Panthers’ defense hasn’t done enough to overcome their struggles as Carolina finds itself in an early hole.

The good news for the Panthers is that they are one of three 1-3 teams in the NFC South and the Falcons, sitting in first place at 3-1, have started hot only to completely fall apart before. Still plenty to play for, but it is time to consider that the Panthers just might not be as good as we thought they were.

What Everyone Probably Should Be Talking About: Giants 10 – Vikings 24

The Vikings look like they’re following the 2015 Broncos model to contender status. Underwhelming offense and mediocre quarterback? That’s fine as long as you never let anyone score. 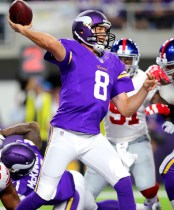 In our preview series, we noted that Minnesota could have as many as five cornerbacks that could earn starting jobs on lesser defenses. That deep defensive backfield kept New York’s deep stable of wide receivers in check all night, with Xavier Rhodes leading the way. Rhodes was charged with containing the ever-dangerous Odell Beckham, Jr. and excelled, only allowing three completions on seven targets.

What’s scariest about this dominant performance in pass defense is that Minnesota’s secondary shut down a good passing attack with almost no help from their pass rush. That shouldn’t be possible and it’s scary to think what this defense could look like with a more consistent performance from Linval Joseph and the front seven, which figures to be a powerful unit.

The first two sections of this article dealt with two teams that have stumbled out of the gate. The Vikings have been the primary beneficiaries of those teams’ struggles. With steady and solid quarterbacking from Sam Bradford and a defense that rivals any in the League, Minnesota can dream big right now.

Your “Football is the Best” Moment of the Week: Raiders 28 – Ravens 27

Yes, it was close and high-scoring, but we’re going to focus on Michael Crabtree here. Crabtree has had one of the weirder career arcs that I can recall a professional football player having, going from being considered a disappointing bust to one of the league’s better wide receivers, to not durable enough, and now back to being praised. He turned in a praise-worthy performance in this game with 8 yards and 3 Touchdown catches. It’s always nice to see a big day from one of those guys who just won’t die.

Your “Football is the Worst” Moment of the Week: Colts 27 – Jaguars 30

Your first game of this season’s London series, where you were reminded why no one outside of the United States cares about American Football. I went to a bar to watch Manchester City play Tottenham at 9:30 on Sunday morning and noticed that this game happened to be on too. I didn’t watch it, and you didn’t either. If you want to grow the product in a foreign market, maybe send some teams that aren’t the sporting equivalent of two wet bags of dogshit. Die in a fire, AFC South

This game could have gotten a lot uglier if not some remarkable incompetence at finishing out drives on the part of Cincinnati. Man, do the Dolphins look bad. 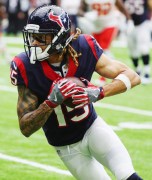 Because one AFC South divisional matchup wasn’t enough for this week, the NFL schedulers graced us with two of them. Will Fuller looks fantastic, though. He’s been the best receiver this season on a team that features DeAndre Hopkins. You just wish that Brock Osweiler was having a bit more fun with all of his toys…

Russell Wilson-to-Jimmy Graham finally worked! This was the first time that the Jimmy Graham trade didn’t look like a complete waste of Max Unger for Seattle. I was skeptical that Seattle’s offensive line would hold up in another matchup with a tough front seven. Those concerns were unfounded this time because Wilson was in peak form. As long as he plays like this, that O-Line won’t matter, as crazy as that is to say.

Roger Goodell finally won and got the Patriots to pay for Deflategate with a loss. But Tom Brady is back and the Pats are 3-1, comfortably on top of what looks like a really bad division. Playoff bye, coming right up.

A sloppy affair that further cemented Cleveland’s status as the League’s worst team. The big positive for Washington in this game was the play of Matt Jones in the running game. Many were skeptical that the Skins were content to go into this season without more talent in the backfield and this was another encouraging display from Jones and the offensive line.

The Bears’ defense frustrated the inaccurate Matthew Stafford all afternoon. The Bears aren’t a lot of fun to watch this year, but the development of Bryce Callahan at cornerback is nice to see. As poor as Stafford was, the Lions need to be better at running the ball. They don’t have the personnel at wide receiver to be this reliant on the pass.

Trevor Siemian has done a fine job keeping the seat warm for rookie Paxton Lynch, but if Lynch keeps playing like he did in his debut, Siemian might not see the field again for a good while. The Broncos have proven that they can win the whole thing without any contribution from the quarterback spot. If Lynch is actually good the way several other rookies have been this season, look out.

The scoreline doesn’t really reflect the kind of afternoon it was for New Orleans, who really struggled on offense in this game. The Saints’ front seven was amazing, though, consistently getting pressure on Philip Rivers and forcing three turnovers that swung the game. 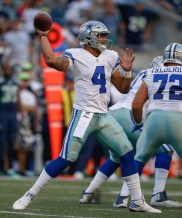 When Tony Romo went down with an injury this preseason, the Cowboys were hoping that Dak Prescott would just do well enough to keep them in the race until Romo’s return. Before too much longer, the Cowboys may be considering whether or not to let Romo return at all. Damn it all if Dak Prescott doesn’t look really good this season. Add Ezekiel Elliott’s monster performance to the equation and Dallas has a good and exciting QB-RB combo behind a very good offensive line. The NFC East may be better than we thought.

The Chiefs defense is a good unit, which makes Pittsburgh’s performance in this game all the more terrifying. In Le’Veon Bell’s first game back, the Steelers looked damn near unstoppable in this rout of a solid team. This Pittsburgh offense is horrifying.