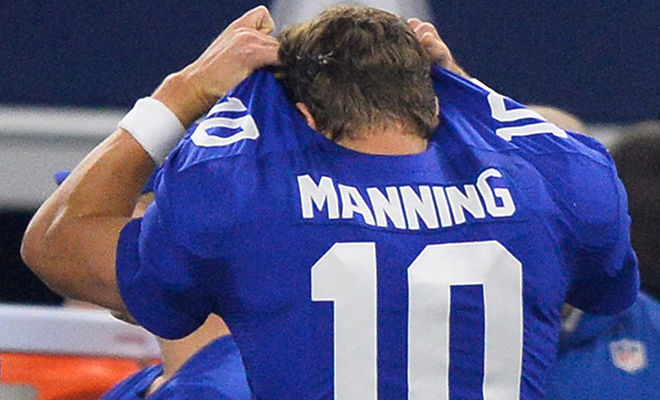 Well, the dust has finally settled on the Giants heartbreaking loss to the Cowboys on opening night, leaving us to wonder just how in the world the G-men managed to give that game away. For all the talk of referees blowing calls and costing the Giants the game, let’s make one thing clear, the Giants could have and should have won on Sunday, but they blew it. Plain and simple.  After being written off for most of the offseason and seeing injury after injury decimate their team, specifically in the secondary, the Giants defense gave us a glimmer of hope. When push came to shove however, they just couldn’t make the stops they needed when it counted most. But all things considered, even thought Steve Spagnuolo’s unit allowed two late touchdown drives with the game in the balance, it would be totally unfair to blame this unit for the loss. The biggest concern for Giants’ fans is how mistake prone the offense was at the end of the game. Eli Manning, eleven year veteran, two time super bowl MVP, $84 million quarterback, yes that Eli Manning, tells Rashard Jennings not to score on the goal line under two minutes to play; a score that would have definitively put the game out of reach. …I’m going to let that sit out there a second… yep, the only logical response to that is “WHAT?!?!”

To compound that further, Manning also seemingly forgot the number of timeouts the Cowboys had and instead of taking a sack on third down and running a necessary 40 seconds off the clock, he decides to throw the ball away, stopping the clock and giving Tony Romo and the Dallas offense one last shot to win the game. It seems just when Giants’ fans think Eli is passed the point of making dumb plays at the end of games, he pulls off a stunt like this and proves them all wrong. As Giants’ fans know throughout the years there have been some tremendously heartbreaking losses, and this one, although it is only the opening game of the year, ranks right up there with the Miracle at the Meadowlands 2. What hurts most is not the fact that the Giants had the chance to win and blew the game, in fact it’s quite the opposite; it’s that we thought they couldn’t win, but should have, leaving an even worse taste in our mouths. The reality is hard for New Yorkers to accept, that even with Odell Beckham Jr. for a full season and resigning their franchise quarterback for another 4 years, that the Giants will probably not be contenders this year yet again. The gap between the Cowboys and Giants was on full display Sunday night, and when the smoke cleared the Giants had done everything necessary to win on the road against a division rival but couldn’t close it out. Let’s face it, the Giants look more like the Giants of the last three years then the one four years ago that went on to win a Super Bowl. So strap in for another up-and-down season for Big Blue with a couple of magical moments sprinkled on top of what will probably be another losing season. This loss hurts but its important to keep in mind, its only week one. Hey, it can only get better from here right?

A Fordham grad and owner of a velvety smooth voice (hide your girlfriends boys), Nick could sing your ear off or talk sports till the sun goes down. Never over the top but not too shy either, he provides the sports insight that only a true New York could provide. Follow him @nicklogerfo