Home / NHL / Ricky Cibrano / For Suddenly Slumping Rangers, the Writing Was on the Wall 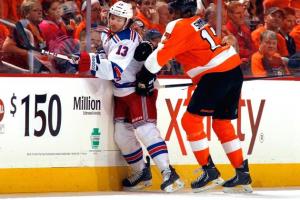 There’s an old saying that goes: “it’s better to be lucky than good,” but whoever coined the phrase clearly wasn’t much of a sports fan. In sports, ‘luck’ tends to balance out—and when it runs out, a losing streak generally follows.

Just ask the New York Rangers, they of the 16-3-2 start, followed by three duds in a row.

The Blueshirts, through 24 games, lead the league in PDO. What’s PDO, you ask? PDO measures a team’s shooting percentage and save percentage—you take the two numbers and add them together to calculate PDO. Generally, the number comes to about 100—much higher, and you’re probably playing unsustainably well, much lower, and you’ve probably been the victim of some wonky bounces. In short, it’s not a stat you want to be near the top of the league in.

So what’s the Rangers’ PDO? An unsustainably high 105.6 during 5-on-5 play—next closest is Ottawa, over two percentage points behind. Before this latest three game slide, it was even higher—hovering around an astronomical 107.

Now, advanced stats do tend to be a bit of crapshoot, for lack of a better term, but the value of PDO holds some water. For one, it validates the eye test—the Rangers have continued to win despite playing far from their best hockey the past few weeks, and have frequently been bailed out by heroic goaltending.

But PDO has also predicted the downfall of a few ‘lucky’ teams the past several years. Past PDO darlings include the 2012-13 Maple Leafs, and 2013-14 Avalanche—two teams that made the playoffs, but featured extraordinarily high PDO’s. Picked by many to regress both in the playoffs and the following season, they did just that, and in the years since, with their shooting percentage and save percentage reverting to the norm, both teams have not only fallen out of playoff contention, but plummeted all the way to the league’s cellar.

No one is saying a trip to the bottom of the standings is what’s in store for the Rangers—they’re still a very good hockey team—but this is a team that, by their own admittance, has not been at their best for several weeks. In the words of Alain Vigneault, following Saturdays dud vs. Philadelphia: “We all need to man up here, I need to get this group to play better.”

And he’s right. Through 24 contests, Vigneault’s squad is getting outshot by an average of nearly four per game—numbers you don’t see from wild card teams, let alone one that expects to be one of the last four standing.

The good news? We’re sounding the alarm about a first place team at the quarter pole of the season—the Blueshirts aren’t exactly in dire straights. But make no mistake, the Rangers need to be much better, or loses like Saturdays could become a trend instead of an anomaly.