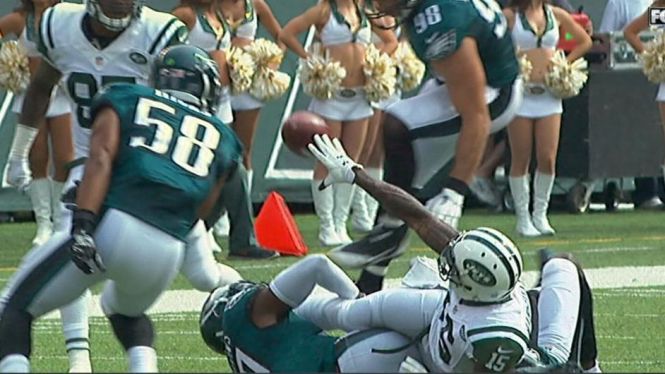 The Jets’ Week 3 performance is going to have a lot of people talking about the “same old Jets”; how the dominant performances in Weeks 1 and 2 were an aberration. Those people are wrong. There isn’t much good news to come out of Week 3; but it’s not time to panic yet.

What went right for the Jets.

Brandon Marshall is still a beast. Yes, he made a terrible play. No, he won’t do that again. He changes the game for the Jets and played a major role in both Jets touchdowns.

Ryan Fitzpatrick spread the ball around well, but it doesn’t seem to have an impact. Fitzpatrick has done his best this season when he can focus on his impact receivers: Brandon Marshall and Eric Decker. Instead, Fitzpatrick was forced to dink and dunk and look for his second and third read all day. This only exacerbated an ineffective performance by the Jet’s O-line.

The running game was non-existent. The passing game was sporadic and the defense came down to earth from a franchise record streak of takeaways.

Ryan Fitzpatrick was under pressure all game. The offensive line was under assault by an underrated Philadelphia pass rush. Philly hasn’t gotten to the quarterback much this year, but they forced a bad game out of Tony Romo in Week 2 and Fitzpatrick had a few passes batted down at the line. Fitzpatrick was forced into bad passes to escape sacks all game by an injured Philly defense. Not good. In an anemic NFC East this defense is going to have plenty of opportunities to change the outcome of games. Fitzpatrick has to be looking forward to Decker’s return next week, as his absence allowed the Eagles to focus on Marshall and take him out of the game as best they could.

The Jets much-heralded defense surrendered 124 rushing yards, something that can’t happen against a team without its premier back. Ryan Matthews and Darren Sproles are very good running backs, but in order to be an elite defense the Jets have to be opportunistic when facing backups. The pass defense was able to hold the Eagles to 118 yards in the air, but without creating 5 turnovers again they let the Eagles dominate the flow of the game. It’s not panic time on defense though, not with Sheldon Richardson returning soon after the Jets’ bye week and a secondary that still looks dominant.

The offense has serious depth issues. Without Eric Decker, Fitzpatrick didn’t have a complementary target to Marshall, and with Chris Owusu’s knee keeping him out for the next few weeks, the team is left with an ineffective and inexperienced receiving corps. Ryan Fitzpatrick’s chemistry with his receivers was an important part of their two wins this year, but Jeremy Kerley, Quincy Enunwa, and Devin Smith clearly lacked a connection with their QB. Decker will come back soon and Jets fans have to hope Smith will start to build chemistry with Fitzpatrick. The running game is also going to suffer in the absence of Chris Ivory and before the arrival of Stevan Ridley.

Last week I talked about how the new look Jets were throwing more and in the midst of a fundamental shift in franchise philosophy. You can throw the ball all over the field when the run game is keeping defenses honest and moving the ball. The Jets ran 16 times out of 74 plays, a measly 21%, for 47 yards. No offense is going to succeed with 2.9 yards a carry. That’s why Chris Ivory is so important to the Jets. Last year the Jets ran for 4.5 yards per rush, with 31 rushes per game. This year through the first two weeks Ivory has been rushing for 4.4 yards per carry with and team has run 31 times per game. That consistency in the run coupled with an improved passing attack has meant victory for the Jets. But balance is important. Bilal Powell has rushed 12 times a game for 4.2 YPC in the first two weeks and in Week 3 he ran 10 times with 3 YPC. That’s a bad game, but in and of itself isn’t disastrous. What the Jets were missing was Ivory’s 17 carries and 74 YPG. Ryan Fitzpatrick had to throw the ball with the team behind, but anything close to 17 carries and 74 yards would have restored balance to the Jets’ attack.

The Jets reinforcements are coming. Chris Ivory is going to return; he’s technically questionable for the Miami game, but he did dress to play this week, so the signs are good there. Stevan Ridley is expected back later in the year and he is a statistical clone of Ivory. Eric Decker is expected back in Week 4 and Sheldon Richardson is coming to join a defensive line that already knows how to get after the quarterback. The Jets’ arrival isn’t cancelled yet, it’s just delayed.

Brandon Marshall has become self-aware, but it’s too late. “That lateral was the worst play in NFL history.” Thanks Brandon, we know.

Without Eric Decker the Jets have the same problems they faced on offense last year; namely double coverage on their #1 receiver and no other options. Brandon Marshall is an upgrade as the #1 pass catcher, but the receiving corps for New York is much more than the sum of its parts.

Rookie Devin Smith showed some promise. Once Decker is back and Smith is covered by lesser defensive backs I expect him to create more big plays, especially downfield.

Fantasy Football isn’t my beat, but as a DeMarco Murray owner, I’m concerned. The Philly running game looked great without him and terrible with him.