Home / MMA / Will Raczkowski / Fighting Like a Girl: How Ronda Rousey and Joanna Jedrzejczyk are Changing the Face of Women’s Sports

On Saturday night the largest UFC attendance in the history of the company, 70,000 people, will be in the record books. In Melbourne Australia, we will have the opportunity to see some of the most gifted athletes in the world perform in front of the largest combat sports audiences since the height of the Pride Fighting Championships in Japan. What separates the event from other, however, are the names of the individuals headlining it. To this point, major attendance records were set by only the most elite names in the history of MMA. Fedor, Lesnar, St. Pierre, Jones…these were titans of the arena, true killers that seemed more monster than man when the cage door closed…so how could it be that two women weighing 135 pounds and 115 pounds respectively, could garner this much hype? Straw-Weight Champion Joanna Jędrzejczyk of Poland, and living legend/Bantamweight Champion/Queen of the World “Rowdy” Ronda Rousey have earned their respect in blood. Not their blood, but blood none the less. 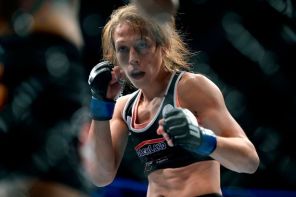 These two women are among two of the most gifted athletes in the world in their sport (and many others) who’s dominance throughout their entire athletic careers have transferred into a level of total control that hasn’t been seen since Anderson Silva and George St. Pierre’s title reigns. Jedrzejczyk was a six time world kickboxing champion before becoming a bonafide MMA star seemingly overnight for even the most hardcore fans. She’s 10-0 and a terror to behold in the cage, as she smashes fists, knees and feet into one overmatched opponent after another. She has intense stare-downs, a famous championship personality (she asked only to be referred to as “Joanna Champion” when media had such a hard time pronouncing her last name) and a cool personality that makes her as endearing as she is horrifying. Opponents melt under the high pressure striking style she brings, and her take down defense is something that is truly unheard of at the women’s professional level. She may very well be the UFC’s next big star, as women can support a fellow female (especially a champion headlining a pay-per-view), men can enjoy her good looks and fun personality, and fans of the sport can enjoy a level of precision and power that previously hasn’t been seen in a women’s division to date. 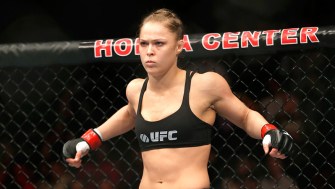 When it comes to Ronda…the name speaks for itself. “Rowdy” is the only way to describe the sport’s reigning Queen, a cult of personality envelopes Rousey everywhere she goes, and the world watches. In her past three fights, Rousey has spent a grand total of 1:03 in the actual cage, finishing every opponent she has ever faced, and finishing all but one in the first round. Mike Tyson has compared her dominance to his own, Ring Magazine has placed her on the cover of their publication, and she’s been featured in Maxim to Vanity Fair to ESPN Magazine. Ronda Rousey is everywhere at once, and through her dominance, the world is beginning to take more and more notice of a sport that was genuinely in need of a superstar after the dethroning of Anderson Silva, retirement of St. Pierre, and the legal troubles of Jon Jones. They found something potentially bigger than all three in Ronda. Her intensity is infamous, her finishes are brutal, and her influence is unquestionable. She’s dispatched high-level competition with a genuine ease, defeating the clear #2 fighter in her division twice, in the exact same fashion. What makes Ronda special is that her level of dominance is something we may never see again in any sport. Her level of intensity in a women’s sport may be higher than we’ll ever see again in a combat athlete. Her beauty, power and intensity have turned her into something than transcends any athlete we’ve seen in a long time, and the knowledge that one day she will likely retire for Hollywood and commercial deals after years of blood, sweat and tears, makes her a commodity we need to get as much of as possible before that era comes to an end.

70,000 people will pack into an arena to see two women defend their belts because for the first time in any sport…their dominance is the more impressive than the males. People tune in to see something special, and with a young champion in Joanna and a current superstar in Rousey, you have the opportunity to see the future queens of women’s sports display their trade for a packed house and wild audience. Move over Venus and Sarena, there are some new girls in town, and they will kick your ass.