Home / MMA / Will Raczkowski / Ding Dong the Witch is Dead: How Holly Holm Shocked the World

Holly Holm was a sixteen-time boxing champion across three weight-classes before she ever entered MMA. As a Mixed Martial Artist leading into her fight with Ronda Rousey, Holm was 9-0 with several head-kick knockouts on her resume, and arguably the top MMA gym and coaches on the planet earth in her corner with Jackson-Wink MMA. Regardless, the vast majority of fans and press alike saw her as just another statistic for Rousey’s next fight promo, someone with a top notch resume who would make a beautiful scalp for the belt of the women’s bantamweight champion. It took Holm a grand total of 5:59 to prove us all horribly, horribly wrong. Holm pulled off the picture-perfect performance, and while a house didn’t fall on the Bantamweight Division’s wicked witch, it likely hit just as hard.

How on Earth Did She Pull That Off?

It’s easy…movement. Holly Holm as a boxer and kickboxer is incredibly long and tall, especially for women’s divisions. Her jabs and front kicks give her an amazing means of keeping opponents at range and away from her hips, where they would aim to take her down, basically in the same way that an old-school lion tamer would use the chair and whip to keep the beast at bay. Holm masterfully blended her ranged weapons with her top-notch footwork and, frankly, made the seemingly invincible Rousey look amateur as a result. 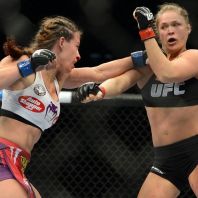 Regardless of all her accomplishments, Rousey’s movement and defense (or lack thereof) has been, historically, quite poor. Typically, Ronda bull-rushes her way into the clinch, eats a few hard shots on the way in, tosses a girl on her head and submits her. Rinse, repeat. In her fights with Meisha Tate, we saw that after the first round, Rousey slows down significantly, and as a result, her poor defense becomes increasingly visible. Tate was able to crack the champion several times with crisp right hands in their second fight, however Tate lacked the fight IQ to stick and move, and instead chose to plant and stand in the pocket with those right hands, which gave Ronda the opportunity to just eat a punch and initiate the clinch.

What Did Rousey Do Wrong?

In reality? Damn near everything. Typically, against a boxer/kicker as sublime as Holm, straight lines are a big no-no. As famed striking coach Mark DellaGrotte of Team Sityodtong Boston always says, “professionals fight at angles, amateurs come in straight” Holm used her angles and Rousey’s linear movement to open up room for punches and kicks galore. Rousey charged in on a straight line to back Holm into a corner and clinch, typically Rousey’s opponents have used this opportunity to plant and throw a big shot, Holm however, angled out and picked her shots, giving her the opportunity to continue to strike from outside Ronda’s clinching rage, and continue to fight her at length. At one point, Ronda charged in so aggressively, Holm simply slid under her punch, sending Rousey crashing into the fence.

The second problem with Rousey’s game-plan was that…she didn’t really have one. As usual, Ronda bombed in, threw some big shots and searched for the clinch. However when that didn’t work, we discovered a massive hole in the champion’s armor…she didn’t have a response. No wrestling style takedowns, no head-movement or footwork to cut distance, she simply kept running into that piston-like jab of Holm, ultimately getting wobbled by a punch and eating a missile of a headkick to put her down for good. Rousey proved that while her athleticism is second to none, her fight IQ is alarmingly low. She made no major attempts to change the direction of the fight and looked frustrated and annoyed that her game-plan wasn’t working and that Holm was staying mobile. Rousey at this point is a one-round fighter, and proved that after looking lost and out of breath after a first-round shellacking at the hands of the blonde bomber across from her. 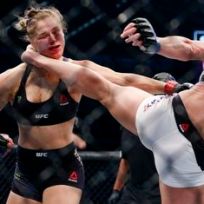 The final major issue Ronda had was her coaches. Rousey’s corner after the first round offered very little advice or substance to their fighter after the first-round thrashing at the hands and shins of Holm. In fact, her coach went so far as to say that she looked “perfect” and that she “wasn’t losing”. Now, realism is crucial for a fighter. A fighter needs to understand if he/she is up or down in the cards so she/he can adapt and turn the tide. However, actual advice in regards to HOW to achieve that turning of the tables is necessary to achieve the desired result. Rousey’s corner failed her as a result of their inability to accurately assess the situation and offer something resembling a game-plan or advice for their fighter in response to Holm’s brutal striking onslaught. On the contrary, Holm’s coaches Greg Jackson and Mike Winklejohn (easily the best in the game) offered clear, concise and intelligent advice and suggestions for how to finish the battered Rousey, after constructing the picture perfect game-plan to defeat the champion.

Should Ronda Rousey come back as she claims, I believe she is still one of the most dominant athletes on earth, and could very well be one of the best female fighters to ever live, easily. That said, to get her title back she’s going to need to head to a camp that can offer her improved training partners and an intelligent game-plan. Gyms like Team Alpha Male, American Kickboxing Academy and El Nino MMA all offer some of the most gifted fighters and coaches in the game. With their help, Ronda could easily add more weapons to her arsenal, and use the training partners and coaches to help her develop a plan B and C for when her judo to arm-bar moves don’t work. Rousey is an excellent competitor and may be the best in the world still, but in Melbourne Australia, Holly Holm proved that sometimes, the humble-quiet type may be the most dangerous of them all.