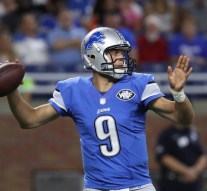 Lions’ quarterback Matthew Stafford is, sneakily, one of the NFL’s more fascinating players heading into 2016. 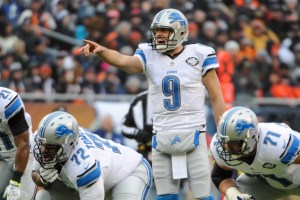 Still just 28 years old, which is very hard to believe because it feels like he’s been in the League for a very long time, there is plenty of reasons to think that he can still improve. Despite having thrown nearly 3,700 career passing attempts, Stafford is only six months older than Kirk Cousins. Stafford has always been an inconsistent player and 2015 was no exception. The Lions were a disaster out of the gate a season ago, but Stafford and the offense got in gear after Jim Bob Cooter was promoted to Offensive Coordinator in Week 8. Stafford was one of the NFL’s better quarterbacks in the second half and if he can replicate that success, the Lions can be dangerous.

Many have wondered whether the high points of Stafford’s career were genuinely good quarterback play or more the result of being able to lob the ball up to an all-time great at wide receiver. Calvin Johnson was hardly at his historic best one season ago, but he was still an exceptionally good wide receiver who will be missed. Marvin Jones and Golden Tate are both solid wide receivers, but they have very big shoes to fill. As tempting as it is to say that 2016 is when we will finally, 3,700 passes later, get a true measure of where Matthew Stafford ranks among NFL quarterbacks, this might not be a totally fair litmus test either as he will have little help from his running backs or his offensive line. 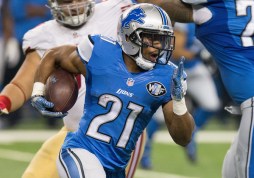 Second-year running back Ameer Abdullah will be given the keys to the car in the backfield. Based on his play from last year, that’s a somewhat worrying proposition for Lions’ fans. He had the occasional flash of brilliance as a rookie, racking up a few undeniably impressive runs. Those runs aside, Abdullah spent most of the season providing ammunition for the community of NFL observers that’s mostly agnostic on running backs. Abdullah typically took what his offensive line gave him, something that any number of running backs can do. The Lions will be counting on big improvements from him the wake of all of the offensive production left  behind when Megatron hung up his cleats. The alternative option is Theo Riddick, who is underrated as a playmaker. The Lions don’t seem to believe he has the constitution of a workhorse back, but he’s shifty as hell and one of the League’s best receiving options out of the backfield.

If Abdullah is as mediocre as he was a season ago, the offensive line will need to improve for Detroit to have success on the ground. Both of their last two first round picks have been offensive linemen, so the problem here is hardly a lack of investment. The problem is that what talent there is here is raw and will likely need to take their lumps this season. If Taylor Decker can come out of the gate strong, that will go a long way, but there isn’t much precedent for a player so inexperienced being enough of an upgrade to elevate this unit to above-average status. 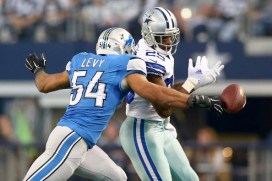 The front seven is probably Detroit’s strongest unit. They’re a group with a high floor thanks to good depth and a high ceiling thanks to the return of DeAndre Levy. A recurring theme of this season is cautious optimism regarding players returning from serious injuries, but it’s hard for everyone who enjoys watching linebacker play to not be really fired up for Levy’s return. He was one of the best linebackers in the League in 2013 and 2014. If he can just be 90% of what he was in those seasons, this has the potential to be one of the NFL’s best front sevens because there’s plenty else to go on here. Tahir Whitehead was a very good middle linebacker in 2015 and he figures to be even more effective when flanked by Levy and either Josh Bynes or Kyle Van Noy, both of whom were effective in place of Levy one year ago.

They’ll be playing behind a solid defensive line, who should make their lives that much easier in run support. Ziggy Ansah was a tour de force last season, recording 14.5 sacks and providing great cover in the run game to boot. Together with the still-effective Haloti Ngata and the massive Devin Taylor, this line should give opposing offenses all they can handle every week.

The front seven will need to be dominant, because the secondary is much less promising. Glover Quin is a decent Free Safety. He’s nothing to write home about, but he’s not a liability either. The Lions’ website lists Rafael Bush as the other starting Strong Safety, but it’s hard to know what to expect from him. He missed all but two games last season and hasn’t been particularly good in his career even when he’s been healthy.

The really good news for Detroit in the secondary is that they do have a cornerback in Darius Slay who can match up 1-on-1 with just about any wide receiver in the League. The really bad news for Detroit is that there is no depth behind Slay at all. Detroit’s depth chart currently lists the dreadful Nevin Lawson as the other starter. Look for opposing offenses to exploit CB2 all year.

Stafford flourishes in Jim Bob Cooter’s offense. I spend the season getting to write “Jim Bob Cooter” in a lot of my articles. The offensive line improves and Abdullah does well enough to spell Stafford and be effective in running situations. The front seven is one of the 5 best in the NFL as DeAndre Levy regains top form and Ziggy Ansah continues to improve. Darius Slay remains one of the NFL’s best cornerbacks and teams without depth at Wide Receiver are ineffective against Detroit’s defense all season. The Lions get one of the NFC’s wild cards.

The Emperor quarterback has no clothes. Stafford is badly exposed without Calvin Johnson as a security blanket. Ameer Abdullah struggles and is benched for Theo Riddick by Week 6. A strong front seven and Darius Slay are not enough to paper over Detroit’s shortcomings elsewhere in their secondary. A below-average offense and a below-average defense propel Detroit to a below-average season.

It’s hard to think that all of Stafford’s good play to this point has been nothing but the by-product of having Calvin Johnson on the roster. But it’s equally hard to imagine a big step forward from a quarterback who just made the step down in receiving options from a first-ballot Hall-of-Famer to Marvin Jones without HUGE improvements elsewhere in the offense, especially on the offensive line. The Lions made no such improvements.

Stafford will run hot and cold and the Lions will struggle to find offensive consistency. We’d be much more pessimistic on the Lions’ defense if there wasn’t adequate infrastructure to compensate for DeAndre Levy not quite being his pre-injury self, but there’s a lot of talent on that side of the ball. There are holes in the secondary that you can’t get completely get away with in 2016’s NFL, but the defense will be a strong unit that won’t have trouble shutting down many of the offenses they’ll be facing. Thanks in large part to their forgiving schedule (4th-easiest in the League, per NFL.com), the Lions will have a nice season, but offensive inconsistency and a talent-poor secondary will be enough to keep them out of the postseason.