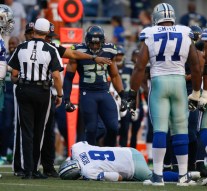 The Cowboys defense is such that the team needs to put plenty of points on the board to win games. As Tony Romo goes, so go the Cowboys’ offense, however after being ruled out for 6-10 weeks with a broken bone in his back, it looks like Dallas must once again rely upon a backup to run this team for a long portion of the year.

Enter Dak Prescott. A 4th round draft pick out of Mississippi State, the rookie has been named the starter moving forward after the injury to Romo. Prescott has shined so far in the preseason, completing an impressive 39 of 50 pass attempts while rushing for 57 yards on 7 carries and combining for 7 total TDs with no turnovers. While you can say that these stellar numbers have come against preseason defenses, few could ask for more from a rookie QB. While he may have shown plenty of promise, there is little doubt that the Cowboys are worse off now then they were a week ago when Romo was still expected to be under center Week 1. Fortunately for Prescott, and Dallas fans, the Cowboys have surrounded him with plenty of support to hopefully take some of the load off of his back

Dallas enters the season with the NFL’s best offensive line for the third season in a row with Left Tackle Tyron Smith serving as anchor. The Cowboys field five great linemen every week and they will be tasked with protecting Prescott from the kind of punishment that could end Dallas’ season prematurely. Though very good in pass protection, this offensive line is unparalleled in run blocking. Last season, they made even Darren McFadden look devastatingly effective at 4.6 yards/carry. This season, they’ll be blocking for a far superior talent in first-round draft pick Ezekiel Elliott.

Modern NFL conventional wisdom would hold that spending such a high draft pick on a running back is a misallocation of resources. Ezekiel Elliott is about to have a very good year in my estimation, but the entire reason you build an offensive line as Godly as this is so that you don’t need to spend a top-5 pick on a running back. How much better than McFadden’s 4.6 yards/carry is Elliott really going to manage, and wouldn’t a draft pick that high have been better spent on a unit that wasn’t already among the League’s best? 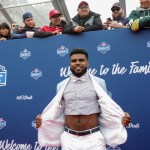 Attempting to get into the mind of Jerry Jones is a fool’s errand, but the logic behind the Elliott pick can only be one of two things. Jones either succumbed to his unfortunate habit of bringing in the shiny new toy – remember, this is a man who wanted to spend a first round pick on Johnny Manziel and was only talked out of it at the last minute by the desperate pleas of Dallas’ real football minds – or Jones and his front office staff want to alleviate the offensive burden on the injury-prone Romo as much as possible. With Prescott taking over the reigns for the foreseeable future, this selection of Elliot will be more important now then previously thought.

Beyond the wonderful Dez Bryant, Prescott’s targets in the passing game leave something to be desired, but that’s not much of a departure from the norm for the Romo-era Cowboys. Barring a rash of offensive line injuries, we know that the Cowboys will be able to run the ball as well as anyone. If Prescott can stay healthy and productive and Romo is able to return as close to 100% as possible 6-10 weeks from now, expect Dallas’ offense to rank among the League’s best. However this should be taken with a large grain of salt as expecting Romo-level production from a 4th round rookie is asking quite a lot. Without Romo this offense should still be at least average if Elliot is able to live up to expectations immediately.

The Cowboys defense has managed to be shockingly mediocre for years and there are plenty of reasons to think they won’t continue to outperform its talent.

The Cowboys’ front seven is being decimated by suspensions with DeMarcus Lawrence, Randy Gregory, and Rolando McClain all set to miss time at the start of the season. The Cowboys’ best defensive player, Sean Lee, is expected to make a healthy return, but he also has a very unfortunate track record with his health and seeing him play 16 games would be a huge surprise. Dallas also figures to struggle in the pass rush, with Tyrone Crawford the only even semi-legitimate threat until Lawrence’s return in week 5. 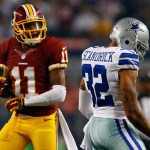 That lack of a pass rush will prove incredibly harmful, as opposing Quarterbacks will have plenty of time to pick apart one of the NFL’s worst secondaries. Cornerbacks Brandon Carr and Morris Claiborne both figure to see significant playing time this season. While there was a time when Carr was a solidly above-average NFL cornerback, those days are gone. Claiborne, on the other hand, was supposed to be a superstar and has been one of the League’s worst every-down players since coming out of the collegiate ranks. He is, purely and simply, the definition of a bust. Nickel corner and jack-of-all-trades Orlando Scandrick has been underrated for years, but he is also returning from a knee injury and shouldn’t be counted on to perform too large a role. The situation at Safety isn’t much better with the promising but raw Byron Jones and Barry Church guarding Center Field in the Dallas defense.

This won’t be a good unit, but they will do their damnedest to recapture the surprising mediocrity of 2015 and give their very good offense a chance to win plenty of games.

Dak Prescott plays an average to above-average Quarterback while Dallas awaits Romo’s return. Ezekiel Elliott is one of the league’s best running backs and runs away with the Rookie of the Year Award. The offensive line stays healthy and the Cowboys are able to keep their defense off the field for huge stretches. Dallas is able to win half their games with a rookie under center and Romo comes back to lead a valiant charge to the postseason.

Dak Prescott turns out to be a preseason hero but can’t handle four quarters against opponent’s first team defenses and struggles mightily. Romo has a setback in his recovery and doesn’t see the field, or at least doesn’t take over until Dallas is out of the playoff race. The offensive line loses a couple of key contributors to injury as well. The defense isn’t able to keep up the smoke and mirrors act of 2015. Ezekiel Elliott leads the NFL in carries as an impotent offense and swiss cheese defense make Dallas one of the worst teams in the nation.

Prescott will show some flashes of potential, but asking a rookie to compete in a possible 10 of 16 games is too much to ask and he struggles like most rookies do. Romo will take over for the final few games of the year and improve their record to respectability by season’s end. Elliot however shows he is the real deal behind that offensive line and becomes the focal point of the offense. Dez wines on the sideline that Prescott can’t get him the ball enough however, as the Dallas defense is unable to help the offense out enough to win important games. This could be another rough year for Dallas but Elliot and Prescott give some hope for the future as Dallas misses out on the postseason yet again.