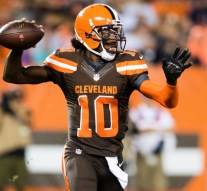 It takes a pretty moribund franchise to make me, a tortured millennial Dolphins fan too young to remember Marino, feel fortunate to not root for that team…but that’s how pathetic the Browns have been. Not that this is a recent development either, the Cleveland Browns have made the playoffs only twice since LeBron was in 3rd grade. When you look deeper at their issues over the seasons, it’s pretty easy to figure where they went wrong. Obviously massive amounts of turnover at the GM and Head Coaching positions don’t help, but other franchises, like the Cardinals or Vikings for instance, have had similar amounts of instability over the years and have come out relatively consistent winners.

We all know the names who have played their part: From Tim Couch, to Charlie Frye, to Brandon Weeden, it’s fair to say that the inability to draft, develop, protect, and weaponize (it works in that order, by the way) a true franchise QB is the common denominator that all perpetually lost franchises share. The good news for the Browns is that eventually even the blindest squirrels find their Acorns: The Bengals missed on Akili Smith but found Dalton, the Lions missed on Joey Harrington before Stafford, and even the Raiders whiffed on Jamarcus before stumbling ass-backwards into Carr. The Browns 2016 season will come down to this: How much of RG3’s failures in Washington have to do with unfortunate, dysfunctional Redskins-esque circumstances, and how much have to do with HIM?

Going into the 2014 season, the EJ Manuel-led Bills were that year’s “were so much more dangerous in Madden than in real life” offense, and this year I think the Browns will claim that dubious honor. You can see why, when you consider the athleticism they have on the outside in QB-turned-WR Tyrelle Pryor, as well as RG3’s former Baylor teammate (before he got expelled) Josh Gordon. When you throw in the electric Duke Johnson in the backfield, and all-world TE Gary Barnidge, this looks like a high ceiling offense with 4.3 speed guys as far as the eye can see. It was tough for me to evaluate the 2015 team on film because the offense will look entirely different this year because of who is at QB. When I looked at film from Griffin’s rookie year, I saw a lot of gimmicky/college-y spread things that worked back in 2012 before the league caught onto them, but will not work today. Four years is an eternity in the NFL, and the read option has been thoroughly defrauded at this point. Pretty much every pass RG3 threw that year was some sort of RPO (Run-Pass-Option), and that will likely not be the case this year due to the talent on the outside begging to get the football. Additionally, as if RG3 and Gordon weren’t enough Baylor Bears on the roster, they went back to the well in Waco, Texas and drafted intriguing WR prospect Corey Coleman 15th overall. Kid has tons of talent, and since Josh Gordon is suspended the first four games he’ll have an immediate chance to shine.

What’s the best case scenario? Glad you asked. I can see this O mesmerizing opposing defenses with their athleticism and multi-dimensionality, on their way to scoring 27 ppg and finishing in the top 12. For all his flaws as a passer, one of Bobby’s best traits is his ability to drop it in a bucket downfield, and if Gordon and Pryor start jumping over dudes to catch bombs down the sidelines (possible) this unit can be SCARY. The problem is, in order for this to occur they can’t be down by 10 going into every 4th quarter which means the defense will have to pull their weight. Very much like most running quarterbacks not named Russell Wilson, RG3 is at his best as a passer when the defense doesn’t quite know if he needs to pass. As such, keeping 3rd downs at manageable distances will be key for this team, because if RG3 is staring down the barrel of 3rd and 8’s all the time, hilarity will ensue.

Overall, I don’t see it happening: you need to have drop-back consistency to play QB at a high level in this league, and Robert has never had that. Matter of fact, I don’t even think he’ll play a full 16 because he’s frail, which means it’ll be Josh McCown time (OMG yaaaaasssss, exactly what the NFL wanted).

Win or lose, the least you can ask for as an NFL fan is clarity. What do I mean by clarity? I am referring to definitively knowing whether or not the players your team drafted are good enough to cut it at the NFL level. For that reason, I kinda like this Browns defense, if only because 8 out of the 11 players that will start on this unit were drafted by the team in the past 5 years. That’s the beauty of the NFL talent pipeline: its sink or swim. Cleveland is throwing a bunch of 22-25-year-old kids into the deep end of the pool this year, to see if they can hold their own in a division of good to great veteran quarterbacks (Ginger, Flacco and Big Ben). One thing that stood out to me as I watched their preseason film though was how easily DT Danny Shelton gets punked in the trenches. I guess it makes sense: in college at Washington, Shelton played a power position (interior lineman) in a finesse conference (the Pac 12). Predictably, he hasn’t looked strong enough to compete, and gets pushed of the ball on running plays. If Shelton is a bust, then the Browns are in trouble, because their first rounders the year prior (Partyboy Manziel and Justin Gilbert, now  on Pittsburgh) have shown little to nothing at the NFL level.

The youth movement doesn’t stop with Shelton though. Linebacker Nate Orchard (2nd round, 2015), Safety Ibrahim Campbell (4th, 2015), LB Christian Kirksey (3rd, 2014) and DE Xavier Cooper (3rd, 2015) are all “recent grads” that will try to hold down starting roles for this new look Browns defense in 2016. I will need more time to evaluate them, but at first glance the only one that jumped off the preseason film to me was Orchard…the kid flat out lays the WOOD. If this were 20 years ago when teams threw less and you were actually allowed to…. you know…hit people, he would probably be playing safety, but in 2016 he is the prefect prototype for what a modern day linebacker should be: nimble, rangy, and capable of roaming sideline to sideline eating ball carriers and slapping passes away from tight ends. In addition to the new faces, you also have some needed veteran stability in the secondary. Joe Hayden had a terrible year in 2015, but he is still a top 12-15 corner in the NFL, even on his worst day. He will be the one tasked with covering AJ Green and Antonio Brown two times each. Opposite him you have former Packer Tramon Williams, who still plays with the flawless technique necessary as a 33-year-old corner when you have to blanket young whippersnappers a decade younger than you. I have no idea what to think of this defense, I honestly want to like it just because youth and homegrown talent excite me as a football fan, but if all these guys end up sucking then this will be a bad unit once again.

This team will be bad. RG3 will get hurt, and I don’t think hell even be good when he plays. There are talented pieces here, but overall they will go 4-12, and will probably fire everyone (again) on black Monday after Week 17. Only thing that can move the needle here is if the youth on defense thrives, but even if they are a top 10 unit I can’t see this team going .500 in what’s one of the best divisions in football.