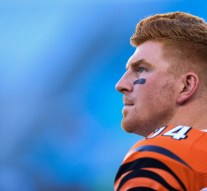 GINGERS DO HAVE SOULS!

I would be a revisionist historian if I didn’t admit there was a point in time when I was all aboard the “Andy Dalton sucks” bandwagon. After years of average play, we all had good reasons to doubt the former TCU star. It is said that pale freckled gingers melt in the sun, and as an alumnus of one of the most Irish-Catholic universities in the world (BC), I can attest to this, but Dalton unlike most gingers was just fine in the sun. His best work took place during 1 PM games without a national audience, but when the sun went down and he had to play a nighttime/primetime game, he’d turn into Danny Orlovsky, and nobody could figure out why. 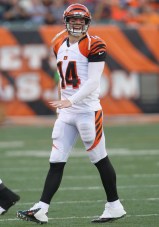 I don’t think people fully realize how fantastic Dalton was last year before he broke his thumb. Cincy was an astounding 10-2 going into that game, and the “Red Rifle” was sporting a 106 passer rating. The unquestioned fact of the matter is Andy Dalton was an elite quarterback last year. The fact that the Bengals managed to go 2-2 with AJ McCarron, who has a smokeshow of a girlfriend but not much else going for him, is a testament to how talented and dangerous this roster is. It’s amazing how far this franchise has come since Marvin Lewis took over in 2003. If you’re a 90’s kid like me, the Cincinnati Bengals were dreadful throughout the entirety of your childhood, after being one of the NFL’s royalty in the 80’s. Boomer Esiason won the 1988 MVP with this squad and took them to a Super Bowl, but the next 15 years were a dark combination of failed coaches, failed quarterbacks and management turnover. It wasn’t until Marvin Lewis (with the help of Carson Palmer and Chad ‘Ocho-Cinco’ Johnson) revitalized this organization that they became relevant again.

Here’s the thing though: very much like the Pirates in baseball, this Bengals fan base, after nearly two decades of losing, has finally tasted the sweet nectar of consistent success. Simply making the playoffs and getting booted in the Wild Card round is no longer enough for them, the goalposts have been moved. Let’s see if 2016 is the year they get their playoff monkey off their back.

Hue Jackson took the HC job in Cleveland, and he will be missed. Dalton’s progression as a passer can be attributed to him as much as anyone. Bengals haters love citing that, and the fact that the 2nd and 3rd receiving options from 2015 (Sanu and ‘Starvin’ Marvin Jones) bolted for free agency dollars. For the first time, we’ll get to see what Dalton can do when he has to implement two completely new targets.

This will be made even harder by Tyler Eifert’s absence for the first month of so. The two men aiming to fill the shoes of the departed are rookie 2nd rounder out of Pitt, Tyler Boyd and veteran Brandon LaFell. Boyd has decent size (6’1, 215) but may be too slow (4.58) to be a true burner or deep threat. Receivers drafted in the top 50 are always high variance and Boyd falls into that category. We know who LaFell is at this point, above average speed and can definitely get behind people, but lacks the ball skills and savvy to make contested catches with limbs flailing in his face 50 yards downfield.

Of course, AJ Green is still here. Unfortunately for him fellow 2011 1st round pick Julio Jones, to whom he’s always been compared, is now by consensus the better player. AJ’s still a stud though, and he demands double teams/safety help on at least 20% of snaps. You can make a very easy case that when Eifert returns they can be a top 8 passing offense again.

Then…you have the backs. In a league devaluing tailbacks, Cincy took Gio and Jeremy Hill with back to back 2nd round picks in 2013 and 2014. It has actually worked out, both guys are very good at their craft. This is a contract year for Gio so you know that guy will be about his cake.

Lastly, Andrew Whitworth and Kevin Zeitler hold down a top 10 Offensive line. The Bengals will score if Dalton stays healthy, which other than 4 games last year he has since coming into the league.

Despite hemorrhaging talented coordinators and position coaches in recent years like so many good teams do (Mike Zimmer, Vance Joseph, and Jackson, among others), the Bengals defense has perennially been a top 10 unit. This will continue in 2016.

The Bengals’ core of Atkins, Dunlap, Burfict, Maualuga and Adam ‘Pac-Man’ Jones remains solid, and some of the secondary guys who started out slow have shown progress in preseason. How well the young, highly drafted corners behind Adam Jones (Kirkpatrick and Dennard) progress this year will be huge to this team. If Dennard and Kirkpatrick can evolve into legitimate corners in the NFL then this secondary has all the pieces to be special.

The Bengals also brought in veteran thumper Karlos Dansby on a low-risk move that you just feel is gonna work out. Marvin Lewis, at his core is a defensive guy, and very much like John Fox teams I feel that his teams have a high floor on that side of the ball. 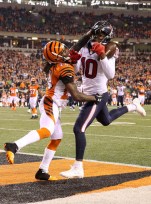 There are ways things can go wrong of course. For starters, Pac-Man Jones is old as hell. Corners don’t decline gradually, they lose their shit all at once. Could 2016 be the year Jones hits the cliff? Meanwhile, Burfict is suspended first 4 years for going ape against the Steelers in the playoffs last season after being provoked by another former rude boy Joey Porter. As I mentioned, the corners behind Pac Man are green, and have so far looked busty and not in the good way (wink wink). The doomsday scenario for the TigerCats is a world where the corners suck and they can’t get a pass rush against a good slate of QB’s. Atkins, great as he is, lacks the explosiveness to be a 16-a-year sack guy, opposed to a 11 sack one.

I think there’s a pretty good shot that this team finishes in top 10 DVOA on both sides of the ball. Losing Hue Jackson stings, it really does, but they have a quarterback, and get to play Cleveland twice. I’m going 10-6 here. Too much talent, just probably wont get past Ben or Brady in the end.