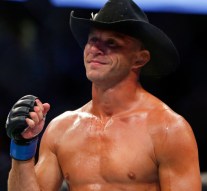 Hardcore fans and casual fans rejoice, the UFC seems intent on continuing its streak of crowd-pleasing fights to follow Nate Diaz and Conor McGregor’s scrap for the ages.

One fight removed from his devastating title loss to Tyron Woodley, former Welterweight kingpin and knockout artist “Ruthless” Robbie Lawler is rumored to be gearing up for a striker’s delight against fan-favorite and kickboxing expert Donald “Cowboy” Cerrone at the UFC’s inaugural event at Madison Square Garden.

Long considered one of the sport’s premier Lightweight fighters, ‘Cowboy’ has pleased crowds for years with his devastating fast-paced striking style and penchant for head-kick knockouts.  That said, his quest for Lightweight gold was stalled by Rafael Dos Anjos, and Cerrone was forced to look for a new route to a title belt. However, the perennial lightweight contender appears to have completely reinvented himself as a welterweight, stopping the notoriously durable Patrick Cote and Rick Story by knockout, as well as knocking out fellow striker Alex Olivera in his welterweight debut.

Now, Cowboy will face easily the toughest competition of his career, as Lawler comes into this fight a former champion with a long history of severely injuring some of the world’s best fighters.

Lawler is a fighter who will go down as an all-time legend. Blessed with super-human knockout power,

Lawler only seems to get more vicious, more powerful and more excited when the fists start flying and the blood starts pouring. His wars with Rory MacDonald, Johnny Hendricks and Carlos Condit are all ranked among some of the sports all-time best fights, and Lawler came out on the winning end of all of them…by devastating fashion.

This fight may be the fight needed to catapult ‘Cowboy’ into true super-stardom and give him an elusive second title-shot, while simultaneously proving to be Lawler’s chance at redemption and a second chance at gold of his own. Both fighters are some of the UFC’s all-time most exciting finishers, and are dedicated to fan-friendly fights. If the rumors are true, we have a serious contender for fight of the year between two of the best to ever step in the octagon.